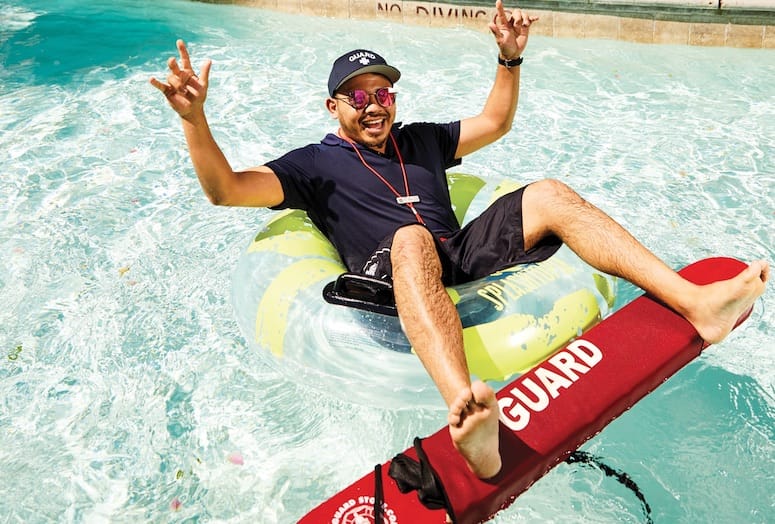 Despite being born in the desert — where, legend has it, there were once more swimming pools per capita than anywhere else in the world — Juan Corona Jr. was never a water baby.

“I learned to swim around age 11,” recalls the 28-year-old Indio native. “I liked to swim, but not to the point where I was OK in deep water.”

As those mocking Fates would have it, a yen to work in hospitality brought him to two of the area’s luxury resorts, where he was initiated into the lifeguarding club. But it wasn’t until five years ago, when he began work at Omni Rancho Las Palmas Resort & Spa, that he found his aquatic stride. Starting as a seasonal part-timer, he was swiftly promoted to full-time year-rounder, then to lead lifeguard, and finally to lifeguard supervisor, a post he’s held for a little more than a year. His chief duties are to train and schedule a crew of 50 to 60 lifeguards in season (their numbers dwindle to 20 in summer) and to supervise their supervision of on-property water park Splashtopia, as well as the resort’s adults-only Azure pool.

“You really can’t please everyone,” Corona says when asked about the greatest challenge of his job. “One of the big issues we have is that our waterslides have a 42-inch height requirement. Some kids don’t meet it, which upsets parents, some of whom are hard to calm down.”

Does he miss those early days atop the lifeguard stand? “I do miss it from time to time,” he confides, “but I can always jump back on!”

“This little unmarked bar in Palm Springs, Dead or Alive. It’s got a small and intimate atmosphere, and it’s a local business. It’s not like any other bar that’s huge and still cramped — it’s just craft beer and wine, and the music is low so you can actually talk.”