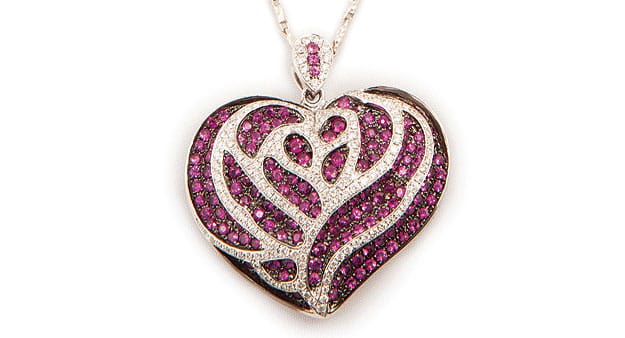 Two sweethearts, each 96, rolled into El Paseo Jewelry. Wheelchairs side by side, the gentleman chose a 6-carat diamond ring and placed it on the lady’s finger. He held her hand and kissed her.

“They got engaged in my store,” Raju Mehta says. “They were so much in love. It was so romantic.”

And they were back on their anniversary to upgrade the mounting.

It’s tempting to say that every day is Valentine’s Day at El Paseo Jewelry. “I sell happy things to happy people. I sell a girl’s best friend,” says the proprietor, who boasts the largest collection of diamonds in Palm Desert. Known for reasonable prices, as gem prices go, Mehta bypasses the middleman, sourcing directly from his homeland: India.

Mehta was born in Palanpur, India’s largest diamond-cutting center. “About 95 percent of the people of my religion, Jain, are in the diamond-cutting business,” he says. When he was 15, his brothers persuaded him to spend his after-10th-grade vacation not playing, but learning the craft.

Having devoted his lifetime to hands-on experience, he quietly declares, “I know every part of a diamond.” Of course, nowadays, computers do the cutting. Mehta misses the personal touch.

After establishing a firm in Los Angeles in the early 1980s, he opened his glittering premises on El Paseo in 1998. At first, he came here only at peak times, like pre-Valentine’s Day. Now he’s settled into seven days a week. An attractive man with an easy sense of humor, Mehta once sold jewelry on television.

El Paseo Jewelry focuses on beautiful diamonds — the bigger the better. Regardless of the trend for adornments of colored stones (chocolate, yellow, blue, pink), clearly dazzling diamonds always prevail. And of all the many shapes, round are most in favor.

Customers have a way of returning for larger-stone replacements. Mehta shrugs. “Diamonds shrink on a woman’s body,” he says.

The store’s over-65 client base proves that younger patrons don’t own love. One man presented his wife with a 50-carat diamond ring on their golden anniversary. Too big, she protested. But her husband replied, “I’m buying it, and you’re wearing it.”