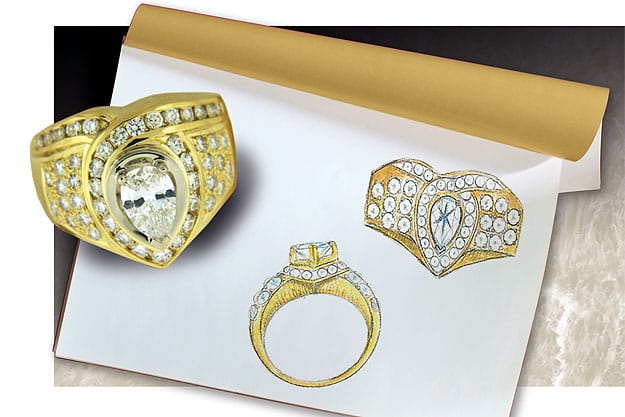 As trade-ins go, three for one hardly sounds like much of a deal — especially when we’re talking about diamond rings. For the owner of this dazzling piece, however, it was a dream come true. A heart-disease survivor, the client decided it was time to transform a few pieces of her old jewelry into something completely different and special — a newly designed ring for her renewed life. And she knew where to go to bring her vision to reality.

“With custom work, people usually have something in mind, but not everyone has the artistic ability to put their imagination to paper,” says Fernando Olivares, general manager of DeLuca Jewelers in Palm Desert. “That’s where we can help out, although you have to be a really good listener so they don’t end up with a piece that’s not what they pictured in their mind.”

Olivares draws a preliminary rendering, often within an hour of speaking with a client, while both of them still have a fresh memory of what the client wants the ring to look like. “When I start drawing, it’s my Zen time,” he says. “I like to do my pictures to the actual dimension so people know exactly what size the finished piece will be.”

For the ring shown here, the client wanted the top to look like a heart, but also resemble the ribbon for heart disease awareness. And because her old rings had sentimental value, she asked to have the new one composed from the same gold. Olivares sent the gold out to be refined, removing impurities that had accumulated over the years. All of the diamonds, including the center stone, belonged to the client.

“The diamonds were all different sizes,” Olivares explains, “so we tapered them down from larger to smaller on the sides and tried to use ones that that were all the same size on top. In the center, we did what’s called an illusion head. It’s a very polished look that makes the pear shape appear larger.”

Most jewelers who do custom work use computer-aided design and machines. But at DeLuca, they do it the old-school way, as they have since their original store opened in Los Angeles in 1947. “We have a wonderful jeweler here who cuts all the wax by hand,” Olivares says. “We don’t like to do anything using machinery, because it takes away the essence of the art.”

As he cuts away the wax, the jeweler essentially creates a sculpture of the ring that is then put into a rubber mold. The wax is “lost” during casting, and gold, or other metal, is shot into every little crevice of the mold. Once he removes the mold, the ring still needs to be polished and have some of the details cut out. “The rough is very organic,” Olivares says. “But as you start setting the stones and building the prongs, it all comes together.”

Ultimately, it’s a very rewarding experience for everyone involved. “Each little detail of a piece means something to the customer,” Olivares says. “Every person who comes in here has a little bit of a designer in them. They just need someone to bring it out, and that’s what I love to do.”