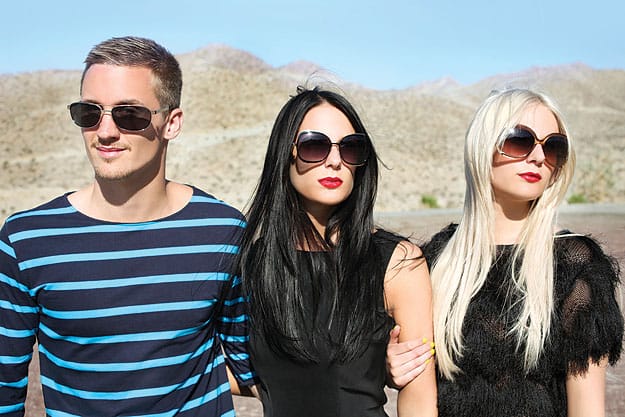 It seemed an oddly serendipitous moment while driving down El Paseo in Palm Desert to find the trends in men’s and women’s sunglasses. A Sheryl Crow song came on the radio. We began singing in unison — “I’m gonna soak up the sun” — and I knew this was a good start.

During my quest, a few fashion imperatives became clear straight away. “The cat-eye look is coming back in style, but it’s a little modified and very wearable, even for women who don’t like to have an extreme cat look,” says Sonia M. Campbell of Spectacular Shades. She pulls out a couple pairs from Emilio Pucci that elegantly demonstrate her point. One is a subtle, rose-quartz color with a matte finish — it’s easy to imagine Elizabeth Taylor wearing these glasses poolside in Canne or Saint-Tropez in the 1960s.

“The aviator shape is in right now too,” says Campbell, as she shows a classic frame by Porsche that’s suitable for men or women. “Larger frames are also popular, and they give you great UV protection compared to some of the narrower frames that were fashionable years ago.”

Down the street, Optical Shop of Aspen also prominently displays aviators. “Bigger-framed versions are a look that fit on many people, and a lot of women like aviators,” says the shop’s owner, Joyce Hoekstra. Their appeal is clear, as Hoekstra brings out some frames from Chanel with leather trim on the temples. The white leather on one pair is twisted in a pattern that mimics the chain of a classic Chanel Flap Bag.

A little flash seems to be the order of the day for men and women.

Campbell has gold-plated and gold-filled FRED glasses with lizard-leather inserts on the temples. “There’s no frame around them, so they’re very lightweight and wearable for a man or a woman,” she says.

Campbell also shows off some bling with a pair from Jimmy Choo. “They have quite a bit of glitz, which some women love; others stay away from it. I’m a glitzy person, so I like it.”

Campbell and Hoekstra both stock the newest Bulgari frames featuring Swarovski crystals on the temples.

Hoekstra notes that another trend that owes a debt to the past is the thicker, bolder look Oliver Peoples has brought back for the brand’s 25th anniversary. “The matte textures and clear frames are some of the most sought after right now for both men and women,” she says. “And they’ve introduced some new colors, including a green that’s very popular.”

As I settle back into the car, a shiny new pair of aviators wrapped around my eyes and Sheryl Crow still buzzing in my head, it hits me: When it comes to this season’s sunglasses, what’s old is indeed new again, but in some inventively cool ways.