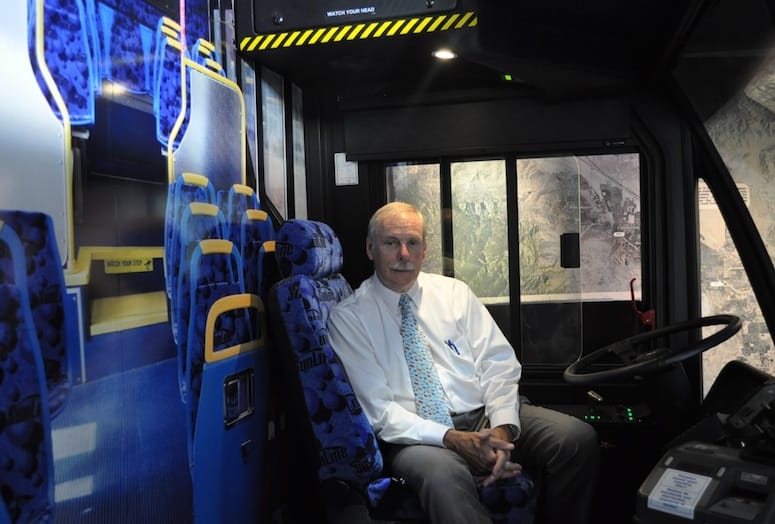 Roger Snoble has only been interim director at SunLine Transit Agency since May, but has already scored a first.

Snoble, who has 43 years of transit experience including the last seven as CEO of Los Angeles County Metropolitan Transportation Authority, will sit on a panel at the 2013 Southern California Energy Summit, Oct. 3-4, at the Palm Springs Convention Center.

Snoble said this is the first time in the summit’s four-year run that SunLine has been invited.

“They called, and I know the guys at the public relations firm, and I said, ‘We’re not part of it?’ “ Snoble says. “I thought it would be good for SunLine, but also our other division, SunFuels, which sells fuel, hydrogen and liquid natural gas. We have a lot of the fleets that come here to use compressed natural gas.”

SunLine is the first in the United States to convert its full fleet of buses to compressed natural gas, and have two hydrogen-powered buses in action.

He will sit on a panel slated to discuss Expanding Regional Clean Transportation at 11:15 a.m. Oct. 4 at the convention center. The afternoon is when the heavy hitters speak, including U.S. Rep. Raul Ruiz at 1 p.m. and keynote speaker, actress Daryl Hannah, at 1:15 p.m. with Sarah Blackhouse, founder of Future360.

Snoble tackled the questions his panel will face.

Where is the Regional Clean Transportation market headed?

“I think it has to head in a direction that will produce a lot cleaner emissions for all vehicles. Buses have led the way, big fleets are joining in and we’re seeing a lot more work by the auto industry to come up with much cleaner emission vehicles. The question in my mind is, is it going fast enough? It’s all a matter of economics, of course. It takes a lot of money to do just what we are doing for hydrogen. These buses are real expensive. If we get to a point where we have enough of them on the street, the cost will drop greatly. It will be comparable to a compressed natural gas bus.”

What can we do to support and expand regional clean transportation?

“We need to attract more people to ride the bus. Our ridership is growing. Our service is still very limited. We could use service in places we don’t serve right now, and more frequent service to those we do. The more we can grow, the more people who will leave their car at home and use a bus. Still the biggest polluter around here is the single-occupant vehicle.”

“We have two hydrogen buses and two more are being built. We should get those in the early part of 2014. We got a grant from the federal government in using the hydrogen fuel cell. We’re relying on it 95 percent to fuel the bus, and we’re having a lot of trouble with that. The new idea is to have a much bigger battery pack so the fuel cell doesn’t have to work all the time as hard as it can. The motor can draw power from both or just the battery. From a long haul standpoint, we’ll be able to get a lot better results.”

VIDEO: Watch and listen to Roger Snoble’s answer to the question – What are the most pressing issues facing SunLine in the area of Regional Clean Transportation, and what is being done to address them?