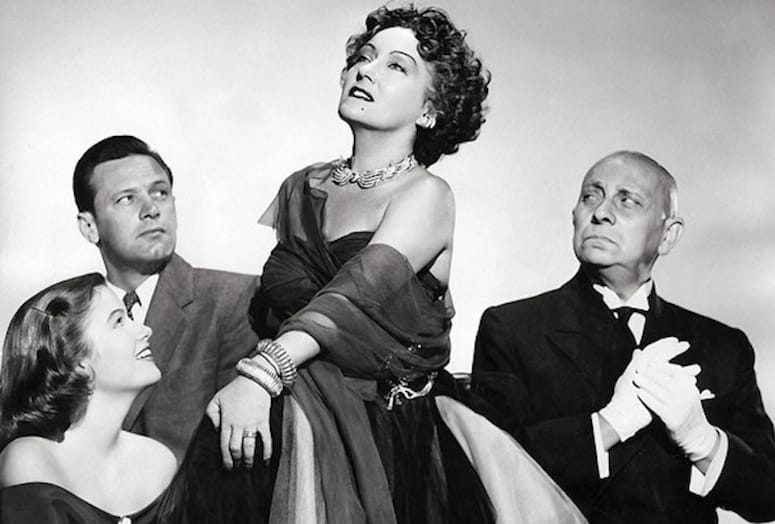 Black T-shirts from the Arthur Lyons’ Film Noir Festival in Palm Springs always boast the headline, “It’s all in the story.”

Fans know that film noir is more than just black-and-white “B” movies from the 1940s and ‘50s. They feature a character change, like when a good guy turns bad.

“Sunset Boulevard,” from 1950, is a prime example of film noir, in which many characters changed for the worse, and not just the reclusive silent film star, Norma Desmond, played by Gloria Swanson.

“Everyone in that film was an opportunist,” exclaims Nancy Olson, who played Betty Schaefer, considered the only “sane” character in the cast. “I played a young writer who tried to use William Holden’s character to further my career, and I ended up falling in love with him.”

Olson, who is currently writing a book, including the time she was a UCLA student and under contract with Paramount, will attend the 14th Annual Arthur Lyons’ Film Noir Festival May 9. After “Sunset Boulevard” is shown at 4 p.m., Olson will be interviewed onstage. The Arthur Lyons Film Noir Festival opens May 8 at the Camelot Theatre, with daily movies running until Sunday afternoon.

She granted Palm Springs Life a brief interview from her home in Los Angeles because she wants to leave some more tidbits for her onstage interview on Friday.

“Gloria Swanson was the only one who truly believed that ‘Sunset Boulevard’ would be a great movie, and it would change our lives,” says Olson, pictured at right. “It was a daring script, and they originally wanted Mae West to play the lead. It could have been ‘high camp.’”

“You know when a picture is a true classic is when the language becomes part of our culture,” Olson says, referring to Swanson’s classic line, “All right, Mr. DeMille, I’m ready for my close-up!”

Last year, Olson had the opportunity to speak with the folks at Paramount Studios about her experiences during that era.

“Everyone was invited, including the office staff, the camera crew, everyone,” recalls Olson. “They were fascinated about how grand the studios were run back then.”

She credited director Billy Wilder, as knowing how to cast Sunset Boulevard. Holden, who was a big star then, wasn’t without his troubles.

“He knew that Holden was drinking too much and that his marriage was in trouble,” Olson says. “He wanted an actor who was really living on the edge.”

Olson was perfect for her fresh-faced character of an upstart writer. Born in Kansas, and still attending UCLA, Olson knew what it was like to be earnest.

After the popularity of “Sunset Boulevard,” she was cast with many big-named stars, including Bing Crosby, but she was unhappy, and gave up acting to become a wife and mother. She was married to Alan Lerner at the time.

“I have no regrets,” Olson says. “I was 21 years old and working at the studio from 7 a.m. until 7 p.m., and would get home in time to have some dinner and review my lines for the next day. All my friends were having fun, and I was working all the time.”

That marriage lasted only seven years. After Lerner's death, Olson wrote a book about their life together for their two daughters, Jennifer and Liza Lerner. After her second husband, Alan J. Livingston, “the love of her life,” passed away following 47 years together, Olson started writing a second book for their son, Chris. She’s currently working on it.

Swanson was right. “Sunset Boulevard” changed all of their lives. Upstart Betty Schaefer became a writer after all.