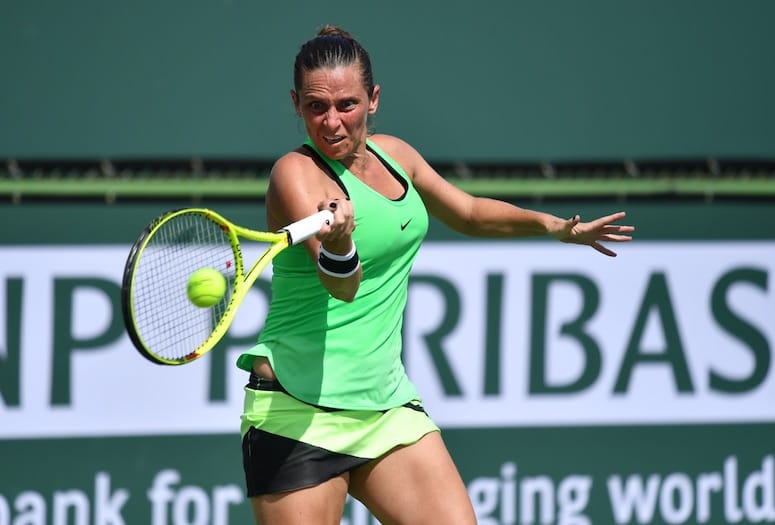 Italy's Roberta Vinci may have been eight years older then her opening opponent at Friday's BNP Paribas Open, but experience won out.
PHOTOS BY RAY GIUBILO/MIKE FREY

The tennis surgeon was at it again Friday. In lime green top and shorts, in front of a packed crowd on court 6 at the BNP Paribas Open at Indian Wells, Italy’s Roberta Vinci sliced apart yet another younger, faster, harder-hitting challenger.

The score was 7-6 (5), 6-4. The victim was U.S. player Madison Brengle, and the result might be considered unfair, considering that Brengle used a tennis racket and Vinci a scalpel. On a given day, Vinci can be as adept at using it as Michelangelo was with his paint brush.

For Vinci, this dissection is not new. Most tour players, male or female, focus on one thing: hitting the ball harder than their opponent. When in trouble, crank it. On set point, go for the fences. Facing a break point, scamper around to your forehand and see if you can hit it hard enough to gut your opponent with your gut strings.

Brengle, who at 26 is eight years younger than Vinci, subscribes to this notion of the game. Big backhand, big forehand, play your opponent as if she is a ball machine. But Vinci is the anti-ball machine. She responds to big smashes by slicing them back, keeping them low, taking all the air out of each and every balloon her opponent sends her way. And then, when the ball gets so low and the spin so unpredictable that the opponent can barely lift it over the net, Vinci is standing there for a quick, point-winning volley. She has, after all, been ranked a No. 1 doubles player many times. The net is her home. 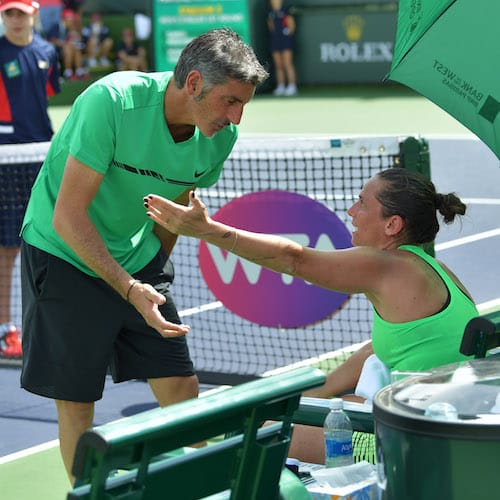 Roberta Vinci listens to her coach, Francesco Cina, during a break in Friday’s match at the BNP Paribas Open.

The 29th ranked Vinci is hardly a household name among U.S. tennis fans, so the huge crowd at Court 6 was a bit surprising.

A lot of the interest was in Brengle. Though moderately far down the rankings at No. 89, she is a U.S. player and is often listed among the future hopes. At last count, there were about 20 of those on the women’s tour and a like number on the men’s, with nary a significant move toward the top from any of them. The first week of tennis at Indian Wells is long on fan satisfaction and short on fan sophistication, so heading to the courts with American players — any American players — is a popular pasttime.

But certainly, among those in the stands on Court 6, were at least a few fans who harkened back to Sept. 11, 2015. That’s when Serena Williams played her semifinal at the U.S. Open, the tennis event that featured dust and noise and mind-boggling pressure. It was the Woodstock of tennis.

At that point in the season, the players had been touring and hitting forehands and backhands for nearly nine months, battling for rankings and jockeying for the next airplane seat to the next pressure cooker. They were tired and cranky. The fans, on the other hand, were fired up. It was, after all, New York and the U.S. Open. This was a trip to the nearby suburbs, a break from never-ending taxi horns and NYFD sirens, a chance to throw back a few drinks and pretend you were watching the Mets or the Giants. Some of the night matches resembled European soccer crowds.

But then, none of that should have been any worry for Williams. She had been through this so many times before, won the U.S. Open six times and was looking like a cinch to accomplish a fourth-straight Grand Slam Tournament victory, something only three other women had ever done.

Across the net stood Vinci, 5-foot-4 and weighing about as much as Williams’ left thigh. Cue the victory trumpets. Get early dinner reservations. This one would be boilerplate. Bet the over-under on games won and lost. No value on a winning ticket here, unless you were foolish enough to waste your money on Vinci, who walked onto the Arthur Ashe Stadium course a 300-1 underdog.

Before the match, Vinci was asked if she thought she could win. “No,” she said.

An Italian journalist may have said it best, while hinting at what sort of objectivity he and his fellow typists practiced: “Even we don’t think she can win.”

But, in what has been described by various tennis writers as the biggest sports shocker since Buster Douglas knocked out Mike Tyson, Vinci won. By the end, Williams looked like she wanted to tear her hair out. The scalpel had blood on it. Even Serena Williams couldn’t pound her way out of trouble against all the slices and chops and lobs and bloops Vinci sent her way. It was a victory for the little guy, the underdogs’ moment in the sun.

If anything, for those general sports fans who cherish a good story, it got better.

In the final, Vinci faced her lifelong friend, Flavia Pennetta. Neither had ever won a major title. Both probably assumed neither ever would. The all-Italian final had the Italian journalists walking in circles and muttering to themselves. They tried to present an air of professionalism and failed..Everyone understood. It was O.K. They were like the Chicago Cubs’ fans of 2015. They had suffered so long.

Pennetta beat Vinci. They hugged at the net. While they were setting up the stage for the trophy ceremony, Pennetta wandered over and sat down next to Vinci. Never happens in tennis. The victor is expected to leave the vanquished alone. The vanquished wants no part of the victor, especially right after the match. But Pennetta had news for her friend. She was retiring. This was her last match. Vinci was delighted for her friend, and delighted that she had been clued into the story before Pennetta took the microphone.

Friday, after her match at Indian Wells, Vinci recalled that day with her usual huge smile.

Vinci called her victory over Williams “my greatest moment, and “the best match of my life.” She said she often draws on that memory.

“I still think about it a lot,” she said. “It gave me so much confidence. It still does.”

She smiled when it was suggested that, against Brengle, she had done so much of what she always does: observe for a few games and then dissect.

But the conversation quickly moved back to Pennetta, whom, Vinci said, will deliver her first child in May.

“I’m excited for her,” said Vinci, who then departed the interview so she could sharpen the tools of her trade for her next match.