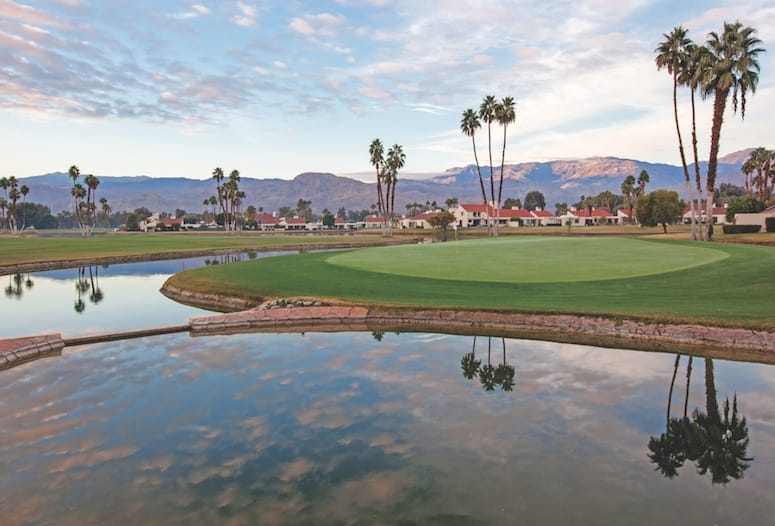 When future LPGA Hall of Famer Amy Alcott plunged into the shimmering pond at Mission Hills Country Club’s 18th hole after winning the Nabisco Dinah Shore in 1988, beginning a long-standing tradition of champions in the drink, little could she — or anyone else — predict the golf tournament’s future incarnations.

Since its inception as the Colgate–Dinah Shore Winners Circle in 1972, the spirited event has sported several monikers, most often tied to Nabisco, which took the reins from Colgate in 1982. Although several modifications were made to the title, including removing entertainer Dinah Shore’s name in 2000, the Nabisco brand loomed large over the tournament for 33 years.

In 2014, however, Kraft Nabisco chose to relinquish its ownership of the first major of the LPGA season, opening the door for a new “inspirational” title sponsor: This year, Japan’s All Nippon Airways steps up to the green, pledging a five-year commitment and an increased purse up to $3 million over the current contract’s life.

“There is no doubt women’s golf is becoming increasingly global and is growing worldwide,” says Yuji Hirako, ANA senior vice president. “Simultaneously, Asia is playing an ever-increasing role in the ladies’ game and, as a business that connects people and opportunities, there are obvious synergies that exist.”

ANA’s involvement heralds an exciting chapter for the historic event, now known as the “ANA Inspiration.” As the new official airline of the LPGA, ANA plans to promote the tournament to a worldwide audience. “Many of our existing customers already have a passion for golf, but we hope more will in the future as we showcase the sport and the talents of the players on the LPGA in Japan and beyond,” Hirako says.

The airline’s passion for golf was sparked 42 years ago when the company sponsored the ANA Open in Japan. “[We] recognized that our business is founded upon the same values as golf: respect, honor, integrity, and dedication, all of which remain central to our success today,” Hirako explains.

Recognizing the value of “if it works, don’t fix it,” ANA promises enhanced events while honoring the tournament’s established customs, such as the donning of the Champion’s Robe after the annual leap into Poppie’s Pond at the 18th hole.

“Along with the heritage and glittering roll call of former winners, Mission Hills Country Club and the traditions associated with it are a big part of what makes the tournament more than a golf event,” Hirako says. “It’s a special occasion that inspires golfers around the world. And it’s in ANA’s DNA to inspire and support men and women with their dreams. Clearly, the LPGA is helping lady golfers realize those dreams."