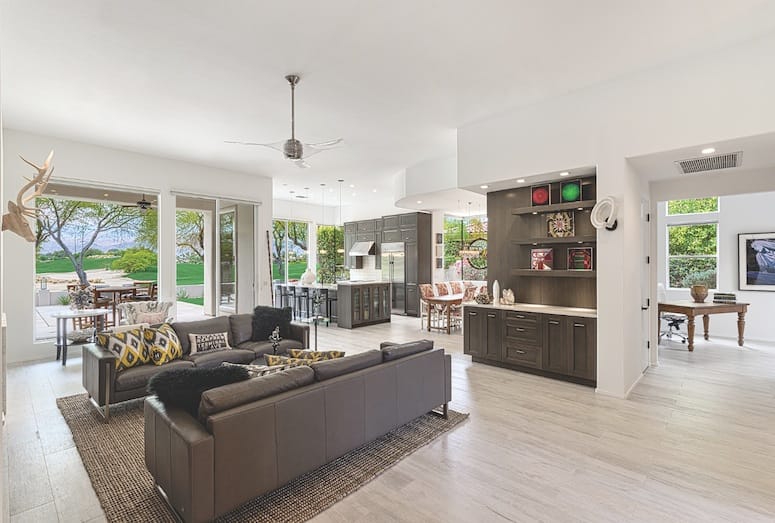 Most home buyers can’t resist a beautiful house that is ready, set, go. But Candice Knox and her husband, David, are not most home buyers.

“The former owners hadn’t done any updating, which I loved,” she says, noting that her current dream home was chosen, in part, because she wouldn’t feel guilty about gutting it. “I took one look at the builder-grade tile and thought, ‘I won’t feel bad ripping this out!’” she laughs.

Along with like-minded friends from Minnesota, David and Candice had owned a “crash pad” second home in Mission Hills Country Club in Rancho Mirage for years. The two-bedroom tennis villa they purchased in 2000 made an ideal desert getaway. That is, until Candice, an interior designer, received an offer she couldn’t refuse. In 2008, an executive they knew at Minnesota-based Cambria asked her to help introduce their natural quartz surfaces to the desert and open their Palm Desert design center. She relocated here full time, while David continues to manage his real estate training business out of Minnesota. Exuding a confident sense of placement thanks to her interior design background, Knox likes to balance feminine details, such as this toile armchair and contrasting pillow, with more masculine elements for an eclectic sense of home.

“This just felt more like home,” she says, adding that she was thrilled to stop eating oatmeal every morning to stay warm. As several years went by with her busy schedule — from sitting on the board of the American Society of Interior Designers to joining Junior League of Palm Springs Desert Communities, for which she serves as president — Knox was outgrowing their once ideal crash pad. During their search for a larger home, it was a jaw-dropping, south-facing view across two fairways that grabbed their attention.

“I believe it has the best view in all of Mission Hills, but it didn’t get snapped up because it didn’t have a pool,” Knox says. “It was my dream house, and I knew I could make it my vision.” Her multiphase endeavor would encompass the main living area (living room, dining room, and kitchen), main bath, and office, after adding a pool, decking, and landscaping to the backyard a year prior.

A designer hiring a design team is borderline dangerous for an unsuspecting 10-year-old home with ho-hum finishes. As Cambria’s former director of sales for the Coachella Valley, Knox had seen work across the area and was well-educated on her options. She chose Benjamin Sullivan, lead designer and owner of Kitchen, Bath & Closets of Palm Springs (KBC), to bring in the wrecking ball and bring on the wood cabinetry — a contemporary yet earthy game-changer in every room. Artwork in a mix of mediums grounds the home’s entry in creativity and invites guests to stop and reflect. Benjamin Sullivan of Kitchen, Bath & Closets of Palm Springs worked with Knox to select pieces for several rooms from Heather James Fine Art.

“It was a really nice collaboration,” she says without hesitation. “We speak the same language. Ben and his staff were very responsive and on top of everything. They always made the right recommendations. You become like a family when they’re in your house every day, so you want to have people you enjoy working with and that you trust.”

One concern for Knox, who loves to cook, was the blasé kitchen’s work triangle that she felt was too big and awkward. “Ben walked in and said we need to flip the kitchen and dining room, and it was perfect!” Knox enthuses.

“I’m a cook too, so I design a kitchen for a cook,” Sullivan explains. “I think outside the box about how any space can be used in a better way.” With one bold move, Knox would enjoy better light and views of the pool, golf course, and mountains from the kitchen, plus an improved flow to the floor plan and effortless access to the pool and barbecue for entertaining. Candice Knox relocated to her Mission Hills Country Club home in Rancho Mirage full-time in 2008 to help open the Cambria Design Center in Palm Desert. Now she enjoys the natural quartz surface while entertaining in her remodeled kitchen.

From there, her personal touches blended with the team’s professional execution. New flooring — a wood-grain porcelain tile — added uniformity to the spaces, while walls of semi-custom cabinetry in rift-cut oak created another cohesive layer. After a five-year career out of Cambria’s Cook Street studio, Knox chose one of their natural stone surfaces in cool white for the kitchen, dining room, and bathroom. To vary the Cambria countertops, Sullivan suggested reclaimed wood for the living area to complement Knox’s antique French farmhouse table.

A neglected wet bar became a shrine to the couple’s beloved beverage as a fully functional station that showcases a gleaming espresso machine. “We’re coffee people,” Knox says of the niche that boasts a hidden fridge for creamer, a microwave for reheating, and a sink for refilling the water reservoir.

With a decorator’s eye, Knox worked in sentimental elements, including the round butterfly stained-glass panel in the dining room. “It’s my most precious item,” she says. “It hung in the front window of my family home.” Her mother had purchased it from a Vancouver hotel in 1978, but when Knox married David in 1998, her mother passed it on to her. The dining room showcases two favorite pieces: an antique French farmhouse table, set below the Cellula chandelier from Design Within Reach, and a stained-glass panel that hung in Knox’s family home when she was growing up.

Meanwhile, Kitchen, Bath & Closets’ team worked on functional storage. “Candice had a lot of family pieces like silver and china to store in the dining room,” Sullivan says. “And her husband is a big audio buff, so we made special pullouts in the entertainment center for his equipment,” he says of the rooms’ floating consoles.

To tie it all together, Sullivan brought in pieces from Heather James Fine Art in Palm Desert, including three Warhols — one each for the office, bath, and kitchen. “I love art, and I love to hang amazing art in the kitchen because people live there,” he says.

Knox adores her flip-flopped kitchen. And when it comes to her active role in Junior League, she finds the entire home to be stylish yet practical for related events, from board meetings and charity bag stuffing to the Christmas and end-of-season parties. She and David both enjoy spending time there together with their Yorkshire terrier, Ty, when Candice isn’t back in Minnesota in her role as director of sales and marketing for David Knox Productions.

“The design is fairly simple, but it’s such a livable, breathable space,” Knox says, smiling. “Ben has good taste and a good design aesthetic. He understood my vision. The house just feels like me.”

“I picked a rift-cut oak with reverse bevel door that Ben had never used before, and he helped me find the right light-gray stain.”

“I call it ‘my big fat glass tile.’ It reflects the color of the pool and has a milk glass effect that ties in with the stained glass. I was starting to have heart palpitations about choosing a backsplash. Ben showed me one tile and I was sold. He saved me!”

“At 46, I got a big-girl fridge and stove. It’s heaven — I can never go back. It feels like the Barbie Dreamhouse.”

“For the dining room, I had 1970s dark wood and orange velvet Henredon chairs reupholstered in red and white toile, then refinished in a white wash.”

“I like a bit of a masculine aesthetic, balanced with something a little girly or over the top.” Coffee is a staple in the Knox home, and this impressive niche — a former wet bar — ensures its prominent place in the floor plan as well as practical accessibility to the espresso machine, a mini fridge, sink, and microwave. As Knox loves her newly remodeled home so much that she has often compared it to living in the “Barbie Dreamhouse,” a friend gifted the couple with “Ken” and “Barbie” hand towels for the main bath, which features Cambria countertops on a floating vanit.