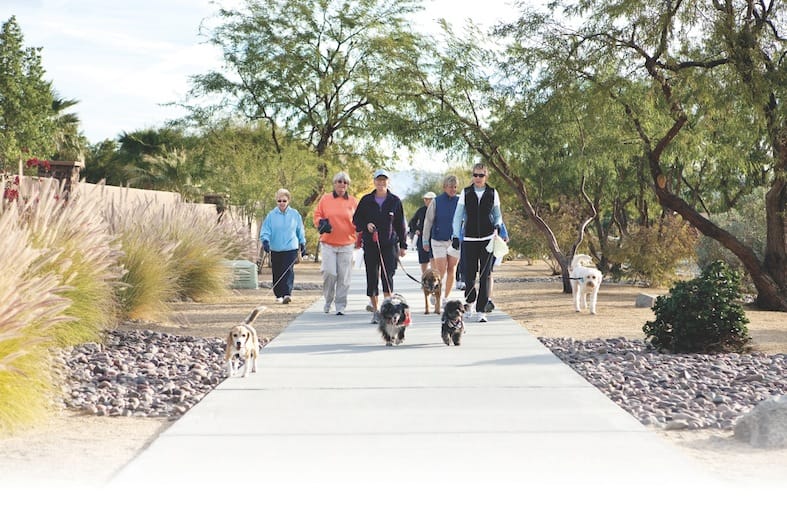 In the Coachella Valley, 25.5 percent of residents are older than 60, while the state shows 17.5 percent.
Photo by Brian Evans

Year-round great weather and proximity to Los Angeles made Greater Palm Springs a popular winter getaway and retirement destination for celebrities and affluent business people decades ago. Their wealth and spending quickly created a service economy built around satisfying their needs. This pattern remains in the valley’s age distribution today.

An area’s age distribution — the percentage of its population in different age brackets — holds significant indicators when looking at its job needs. Older people have different wants and needs than younger ones. For example, an area of younger people requires more teachers than one of older people, who need more healthcare professionals.
In the chart below, the blue line shows the percentage of the Coachella Valley population in different age brackets — divided into five-year increments — while the orange line shows the measurement for the entire state.

Here are three takeaways that distinguish the region:

• The percentage of children in the first four age brackets (birth to age 19) matches the statewide figure, an indicator of the area’s needs for teachers and child-related services.

• In the age brackets from 20 to 45, the Coachella Valley has between 15 and 20 percent fewer people than the state average — probably due to the region’s level of post-graduation migration to other areas.

• The number of people 60 years and older far exceeds the state averages. The age brackets from 70 to 79 are 100 percent greater than the state average. Overall, 25.5 percent  of Coachella Valley residents are older than 60, while the state shows 17.5 percent.

Demographic age patterns can project the job opportunities of the future, which is essential to preparing the workforce to ensure employers have a robust local talent pool. One area trending for significant growth is healthcare.

Comparing the Coachella Valley to other regions of California reveals how age affects healthcare revenue.

This chart at right plots average yearly healthcare revenue per person by age — and shows some age bias: an 80-year-old will generate five and a half times more revenue than a 50-year-old. When figuring in the Coachella Valley’s age distribution — weighted toward older age brackets — the amount of revenue generated is about 20 percent greater, securing healthcare as an important industry here. While new healthcare jobs depend on a number of factors, the most important is population growth — especially the increase in people older than 60. From 2000 to 2013, the number of healthcare employees in the Coachella Valley increased 55 percent, from 8,779 to 13,667. During that same period, the population of residents 60 and older grew from 58,183 to 88,707, an identical increase of 52.5 percent, implying that on average one new healthcare job is needed for every 6.2 new residents ages 60 and older. Because of the region’s mortality rate in the over-60 population, more than 6.2 must arrive to net the 6.2 person increase. The correlation between population and job growth is well documented. When the Coachella Valley population increased from 255,790 in 2000 to 346,518 by 2010, the economy, as measured by sales and jobs, grew proportionally. How it all happens is sometimes unclear. Does a growing economy require and attract more people, or did the needs of more incoming people bring about a larger economy? It’s probably a combination. But the mechanism for growth becomes clear when retirees fuel the population increase. Incoming retirees, with built-in sources of income, need no jobs to survive but rather their spending creates jobs for existing residents.

In the first year of arrival, the total spending of one retiree household will effectively create the equivalent of one new job. Half of that job comes from new home construction because the homeownership rate of retirees is the highest at 80 percent. In the second and subsequent years, the annual spending of that retiree household creates and maintains about half a job.

Most studies show that, excluding healthcare, almost one-half of the jobs created are in the services sector while slightly more than 20 percent are in retail. About 10 percent are in construction, while most of the remaining 20 percent or so is split evenly among the finance-insurance-real estate, government, and other sectors.

Attracting 4,000 retiree residents a year to the Coachella Valley — the baby boomer-adjusted average between 2000 and 2010 — would create 2,000 new jobs the first year. In the second and subsequent years, their yearly spending would create and sustain 1,000 jobs. Considering the Coachella Valley has averaged about 3,500 new jobs a year since 2010, retiree-induced job creation would amount to a significant percentage of all new jobs.

Michael McDonald is a partner in Market Watch LLC and Demographics and Affordability Watch LLC.