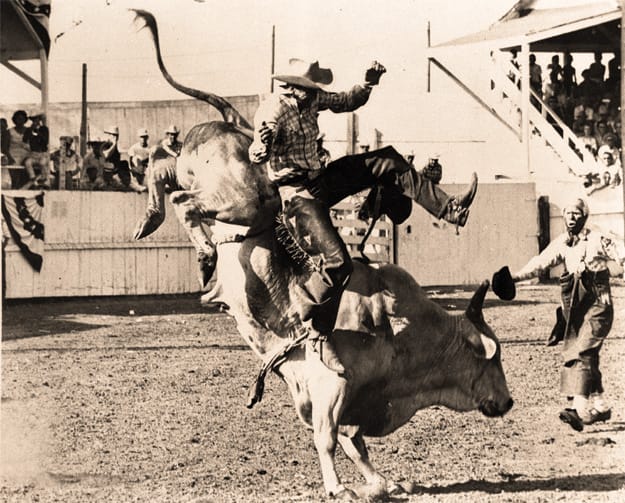 So many people see the Coachella Valley as a place of Hollywood celebrities and industry icons, tuxedoes and gowns, gourmet cuisine, and place settings with shiny silverware and elegant flower arrangements. But, like Howard Hughes (a frequent visitor in the 1940s), the desert harbors a second personality: that of chaps and denim, chuck wagons with tin plates, leather saddles and dusty trails — even among Hollywood luminaries.

“It is not just in the movies; the West really existed,” says Tracy Conrad, chief operating officer of Smoke Tree Ranch, which she calls “the last vestige” of the West in Palm Springs.

The last vestige gains company March 12-14, when Palm Springs Wild WestFest celebrates the rough-and-tumble side of the valley’s heritage.

“Frank was stunningly iconic,” says his friend and business/horseback riding partner Ray Corliss of Palm Springs. “He had a rugged façade and salty humor.”

The times suited such a man. Horseback riding was one of the first outdoor activities offered to tourists.

“Every major hotel in the area had their own horses to rent,” says Sally McManus, a longtime resident and retired executive director of the Palm Springs Historical Society. “If you didn’t ride a horse, you could ride to [trailside breakfasts and chuck wagon dinners] in a huge hay wagon. Also, there was always a celebrity or two.”

Smoke Tree Ranch provided a place for residents and visitors to step back in time and revel in the hospitality and natural surroundings that made the West famous.

“While Palm Springs started to become infiltrated with glamorous buildings and resorts, the ranch maintained its simple, unpretentious ‘Smoke Tree way of life,’” Conrad says. Walt Disney bought a home at Smoke Tree in 1948, selling it to raise funds for Disneyland. In 1957, he returned and bought a second family home there.

“Dressing in Western attire and riding horses was the norm,” Conrad says. “Only the one community pool was allowed on the property, and every night the ‘colonists,’ as residents were called, and their guests were expected to come to dinner promptly when the 6:30 p.m. dinner bell rang.

“Family-style dinners were served at long wooden tables. Branded clothespins served as a napkin holder, place card, and record of prior visits (indicated by marks on the pin). After dinner, the colonists, guests, ranch hands, and cowboys alike joined in square dances.” The Ranch Rodeo Field also hosted professional rodeos and gymkhanas.

Movie mogul Lucien Hubbard and his son-in-law, Charles Bender, purchased 240 acres of land from the Southern Pacific Land Co. in 1927 and hosted guests at the ranch “by invitation only.” After the ranch opened to the public in 1937, it became popular with celebrities such as Mary Pickford, Bing Crosby, Tyrone Power, Lionel and John Barrymore, Joan Crawford, Gary Cooper, and Marlene Dietrich. It also was home to cattle, poultry, and many citrus and date trees. An expert horseman, Hubbard perpetuated the Western feel of the ranch. Daily activities included picnics, campfires, riding parties, and rodeo competitions. Saturday nights promised Western-style dining in the recreation hall and dancing to live bands.

Even downtown Palm Springs played up the cowboy theme with the annual Desert Circus, which began in 1934 and ran for decades. The weeklong celebration, which included rodeos, culminated in the Desert Circus Parade, a star-studded event filled with equestrian groups, marching bands, and decorated floats. People dressed in Western gear wherever they went that week. And if they weren’t so attired, they were “arrested” by lovely lady deputies working for the “sheriff” and brought before a kangaroo court judge, who fined them anywhere from $10 to $100, with monies benefiting local charities.

“It was a great time,” says Thelma “Jimmie” Rogers, daughter of Trav Rogers, a popular Desert Circus “sheriff” and a successful businessman who ran the Mink and Manure club, one of the town’s favorite hangouts. “People of all ages and walks of life mixed together. There’s something about that time and about the Western way that transcends. People become unified.”

While celebrity parade marshals over the years included such stars as Natalie Wood, Lucille Ball, and Chuck Connors, local resident Gladys O’Bear, who went by the name Little Bear, was the self-proclaimed parade leader.

In addition to Desert Circus, there were other parades and rodeos, such as the Palm Springs Mounted Police Rodeo and Rodeo Parade. But people didn’t wait for an excuse to saddle up. The Desert Riders Club, which still exists, began in 1931 when a group of 30 local residents (mostly businessmen and -women) decided to combine daily exercise with a social event: eating breakfast together.

“The rides were always just glorious and the company wonderful,” says Jane Lykken Hoff, whose father (Carl Lykken) ran Palm Springs’ first general store and post office. “Life was not as fast-paced. People had a little more time to enjoy the country and each other.”

Every Wednesday morning from mid-November to mid-April, riders from various ranches and stables took to the trail for a cowboy breakfast of fried eggs, bacon, and hot cakes. “The food, cooked over a flame, always tasted so much better outside,” Hoff says. The breakfast also included guitar playing, singing, and the occasional rope trick.

A club within the club was called Caterpillars. Membership was the result of minor falls and tosses. After such an occasion, the victim was required to stand on a bench at the breakfast, produce a witness, and explain how it happened. If a Caterpillar fell on a cactus, he or she received special recognition and extra chow.

Another riding club, Los Compadres, began in 1941. Members enjoyed monthly breakfasts with a chuck wagon to carry the feasts, moonlit rides, and a Western party or dance. Today, Los Compadres meets weekly for hamburger night and once a year sponsors a guest ride.

Wild WestFest promoter William Beck of Palm Springs remembers watching the Desert Circus parade and rodeo 20 years ago when he was in high school. “I said, ‘One day, I am going to put on the rodeo.’” He started thinking about doing just that in January 2009 and called Rosser, a rodeo producer in Marysville. When Rosser came to Palm Springs for Bogert’s memorial service, he and Beck continued their conversation. Then Beck partnered with Western lifestyle publisher Christopher Burkhardt of Costa Mesa.

“We started thinking how it could be a different rodeo than most other rodeos,” Beck says. In addition to bringing in the best riders in the country to compete in events such as a mounted shooting and mustang lassoing, they expanded the event to three days of activities that include a music festival and Taste of the West food sampling on grounds across from the Palm Springs Convention Center.

Beck says he is committed to presenting Palm Springs WestFest for at least the next five years.