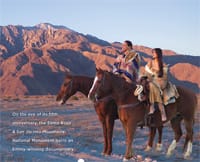 In Oct. 24, environmentalists, politicians, hikers, and admirers of Coachella Valley’s beautifully sculptured perimeter will celebrate the fifth anni-versary of a law that created the Santa Rosa & San Jacinto Mountains National Monument. It is the only congressionally designated national monument in recent history, and much credit goes to U.S. Rep. Mary Bono, who championed the legislation that now preserves the mountains for future generations.

The effort to designate the mountain range as a national monument first surfaced in the 1930s; the initiative failed under Theodore Roosevelt’s administration. About 60 years later, it was designated as a national scenic area.

“The creation of the national monument [in 2000] was driven by a goal of protecting the wildlife and beauty that embodies these majestic mountains while preserving the quality of life of local residents,” says Bono, who has since taken a three-day horseback ride and camping trip in the mountains that she says she will cherish forever. “The monument strikes an important balance of ensuring that these lands are protected and that private land owners still have rights to their own land.”

The Agua Caliente Band of Cahuilla Indians is a full partner in the agreements that allow consolidation of mixed tribal and Bureau of Land Management lands into this monumental treasure. “We worked with BLM officials to take the idea to President Clinton” says Tribal Chairman Richard Milanovich. “When Congresswoman Bono heard what we were doing, she became involved. She introduced legislation on a congressional level instead of an executive order by President Clinton.

“The monument designation provides certain safeguards and protections to the land within the monument, including our tribal lands,” Milanovich continues. “It also reinforces the mystique and cultural significance to the community and to our people.”
The tribe owns about 10,000 acres, most of it in the mountainside, says Tribal Chief Planing Officer Tom Davis.

“Our goal is to increase awareness of the national monument in the local and global communities,” says BLM monument manager Danella George, an environmental protection specialist who worked for the Environmental Protection Agency. To this end, BLM will expand visitor services and conservation education; complete a trail plan that honors recovery of the Peninsular Ranges bighorn sheep, allowing for better scientific understanding and conservation of the ecosystems; and partnering with organizations in the community to serve these goals.

The monument’s creation took the cooperation and support of the cities of La Quinta, Indian Wells, Palm Desert, Rancho Mirage, Cathedral City, and Palm Springs, as well as Riverside County. Fourth-term Palm Desert Mayor Buford Crites, a mountain wanderer himself, was among the local pioneers who helped establish political support for the monument; he is also chairman of the Citizens Advisory Committee for the national monument.

“This is an idea that has allowed the public to forever protect the scenic backdrop to the Coachella Valley,” Crites intones. “It provides a remarkable op-portunity for people to enjoy outdoor recreation when they visit our valley and provides for sustainable protection for the plant and animal communities of our local mountains — and it does all this in a way that allows us to purchase and preserve land at reasonable prices. It is an example of what local, state, and federal entities can do in cooperation.

“Going back as little as 20 years, as much as 50 percent of what is now the Santa Rosa & San Jacinto Mountains National Monument was not in public hands, so trails and other recreational opportunities crossed public and private land. The national monument [designation] allowed us to consolidate and coordinate those uses of these lands.”

Bono made sure developers were comfortable with property rights both in and adjacent to the monument land and that all land purchases would be from willing sellers at fair market value.

“The purpose of this unique documentary is to educate and inform visitors and local residents of the historical significance and unparalleled natural beauty of the monument while promoting local tourism nationally and abroad,” Jones says. “A 25-minute version provides a spectacular pictorial and factual overview of the monument for showing in cultural and visitor centers, while a 45-minute version includes in-depth interviews for showing on public and travel television regionally, nationally, and internationally. Both versions are high-definition digital films available in DVD and VHS.”

Palm Springs Life is also publishing a children’s book about the monument that’s written by Debbie Bertram and Susan Bloom and illustrated by Palm Springs Life Art Director Stuart Funk, whose pictures are actually paintings that he has donated for auction; the proceeds will help support the educational initiatives of the national monument.

“I believe that if people are informed about these mountains, they will be more likey to help preserve and protect it for future generations,” Jones says.