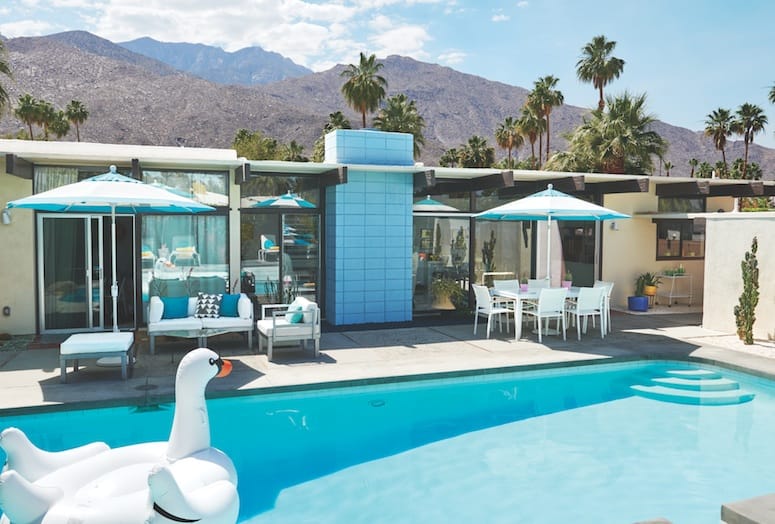 Adrift in the pool, a giant swan adds a playful touch to the backyard of Corey Lynn Calter’s family home. With its raised spa and fire pit, it has become a favorite site for parties and get-togethers — often among friends from Los Angeles who own vacation homes nearby.
Photos by Millicent Harvey

Professional clothing designer Corey Lynn Calter knows a thing or two about visual appeal. Beyond a personal style that begins with intriguing tattoos and fiery red hair, the magic she worked on her vintage Alexander home easily rivals her successful clothing lines. With the family’s border terrier mix, Gilbert, at her heels, Calter embodies the essence of casual Palm Springs chic — whether strolling around the Twin Palms neighborhood or stepping out with her family for an Uptown dinner.

“Every time I walk the dog, I’m out there for an hour chitchatting,” Calter says of her midcentury-strewn enclave tucked behind Koffi and the Ace Hotel. “Everyone we’ve met has been so kind. It’s such a welcoming community.” In a mod vintage necklace and white shirt dress of her own design, Corey Lynn Calter poses in the atrium adjacent to the master suite in her William Krisel–designed home.

As welcoming as her mod 1957 home? That’s a tough call. Yet the effortlessly thrown together appearance throughout this four-bedroom, three-bath stunner is likely deceiving. Between the home’s closing date and a deadline for completing her next collection, Calter felt the urgency to style every inch within a slim, six-week window. “Nothing that is fun is ever hard,” she pronounces. But before she could set off on her high-speed makeover to adorn the 2,080-square-foot home almost exclusively with pre-loved vintage finds, Calter needed to call in a local expert.

As a local guru of Alexander remodels, Chris Menrad made Calter’s renovation his fourth, including his own nearby Alexander. “This is the first true modern tract neighborhood in Palm Springs,” says Menrad about the Twin Palms hotbed of homes that architect William Krisel designed for the Alexander Construction Company in the late 1950s. Here, Menrad’s passion is rewinding the clock. “I take them back to what they really looked like when they were first built and sold,” he says. By partnering with Krisel on all of the Alexander renovation projects, Menrad has captured the original look and feel of these icons, from the muted color palette (he owns paint fan decks from that era purchased on eBay) to cabinetry based on plans now housed at the Getty Research Institute. “I bought mine in 1999 when I didn’t know anything about them — I just loved the feel of it. Then I reached out to William Krisel before I renovated several years ago, and he helped me with many of the details to get it correct.” Though now in his 90s, Krisel continues to consult with Menrad. In addition, the architect has enjoyed plenty of press surrounding Modernism Week (a bus tour stops in Twin Palms) and a renewed interest in his work.

“It’s kind of an important house,” Menrad says of Calter’s residence. Originally, he explains, there were quite a few models, maybe 12 variations. But there are only a few like Calter’s with a flat roof on a corner lot. “This one features beams that shoot through the house and float out over the pool. It was designed specifically for a corner, because you see it from two sides, not just the front. I love this design. It was very cutting-edge at the time.” Pops of blue — including Calter’s recent addition of two vintage pendant lamps over the dining table — feel fresh and appropriate in a living area with a wall of glass that looks out to the pool. Pottery from the ’60s and ’70s scattered throughout the home is one of Calter’s favorite ways to accessorize.

In its restored state, the home proved to be putty in Calter’s skilled hands. “My mother was an interior designer, and I’ve created soft home goods for Anthropologie over the years,” says Calter, a Philadelphia native who designed corsets and made costumes for operas before starting her own eponymous clothing line 15 years ago. From room to room, exotic prints and graphic patterns seem to nod to those in her collections. Meanwhile, evocative blue hues, from aqua to cobalt, reflect shades of the sea. The theme feels serene and peaceful in the main living space, more moody and tranquil in the master bedroom.

“I think people get so obsessed with a certain aesthetic,” Calter laments. “I didn’t want to fill it with all the original midcentury pieces that everyone has out here. I get that, but I also knew I could make other things look fun and chic.” Atop white tile floors that shine like glass, Calter’s hand-picked ’60s and ’70s pottery, quirky brass sculptures, and Moroccan rugs and blankets fulfill her vision of a “Brady Bunch opium den.” “I love the intimacy of individual items that have their own personality. You only get that with vintage,” Calter explains of her choice to steer clear of new pieces. “There’s a certain ‘I found this!’ feeling, because you know there are only a few around.”

This seasoned vintage shopper recalls fondly that she “shopped everywhere and loved every second of it.” From The Shops at Thirteen Forty Five and Bon Vivant in Palm Springs to Angel View, Spaces, and Misty’s Consignments in Cathedral City, Calter embarked on a whirlwind scavenger hunt. As a result, the home lives as if it evolved naturally, with the bulk of the action focused on the airy living, dining, and a kitchen area facing the pool. Corey Lynn Calter on her patio in a jumpsuit she designed.

“I’ve been buying vintage clothing since I was 11, and my mom has an absurd amount of antiques, so I know what’s worth spending money on,” Calter says. “I like Cathedral City stores because the prices are more where I think they should be. But I’ll pay more for special pieces I’ve never seen before.”

This goes some way to explaining the 3-foot-high Italian terra cotta parrot lamp nesting in the living room. He joins an unplanned jungle of animals that includes a tame, patchwork brass lion lounging on a flokati rug and a statuesque wooden cat sporting a throw blanket on its back. Deeper shades of blue in the master bedroom cast a more tranquil tone than the lively aquas in the living areas.

Calter says friends have recently hired her to accessorize their homes. She sees an interior venture on her own horizon. “I’m trying to get friends out here so I can do their homes,” she laughs, though she’s not at all kidding. “In fact, I’m trying to sell this one over here!” she says, pointing across the pool to a neighboring home. Apparently, decorating one vacation home inflamed a nascent design itch that keeps coming back. Oddly, Calter’s new creative addiction ignited a serendipitous turn of events.

“I originally wanted to build a huge art studio for my husband in the high desert. I thought an airplane hangar would be cool,” she muses. “But that was my vision for him, not really his.” Her husband, conceptual artist Glenn Kaino, was hesitant to look at desert property at all, whether in the high desert or in Palm Springs, where Calter dreamed of owning a vacation home. Eventually she, and Krisel’s house, won him over. A midcentury painting Calter picked up pairs perfectly with a vintage pottery lamp atop a desk in the master suite.

“This was the house he ultimately picked out,” Calter says. “When we walked in, it became a mutual dream for us.” Fish blurred in motion hang over the fireplace — one of his older pieces. Another of his works encases model pieces dipped in gold next to the kitchen. Other artwork came from friends or from auctions.

Calter has found she works well from the desert and plans to do so more often, starting this summer. Her kids Stella, 7, and Sadie, 10, sit for hours spinning the Go-Go’s Beauty and the Beat LP and love climbing in and out of the hammock in the side yard. Here, where four orange chairs encircle the fire pit and a ridiculously gargantuan inflatable swan bobs in the pool, everyone feels free to unwind — often among the family’s circle of fellow Angelenos with weekend retreats. A signature look among midcentury homes, dramatic beams in a contrasting color shoot through the spaces, unifying the entry and living room.

“It’s a wild card every time you come out because you never know who’s going to be here,” Calter says. “Sometimes it’s everyone, and sometimes it’s no one,” and she is fine with it either way. With an attractive home this cozy, parties feel optional. “I like it so much more than I thought I would and so does my family. I think my husband is shocked at how much he loves it.”