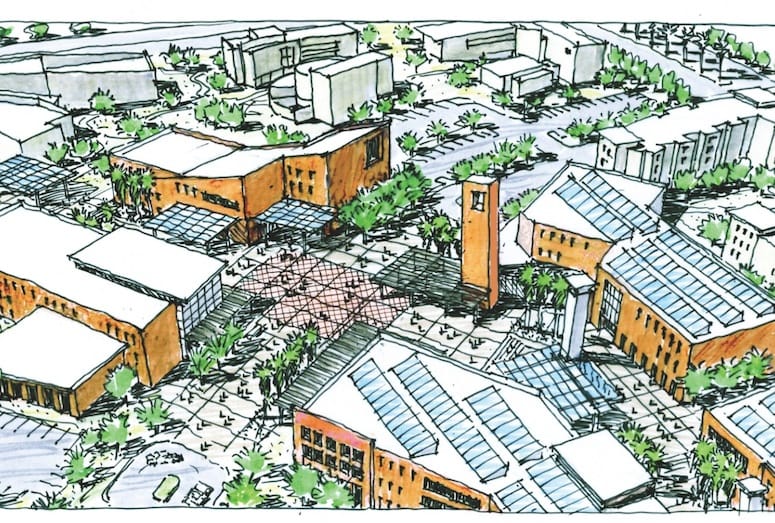 The growth hinges on the university board of trustees’ approval of a draft master plan involving as many as 10 academic buildings on campus.
RENDERING COURTESY OF CALIFORNIA STATE UNIVERSITY, SAN BERBARDINO

If everything goes as planned, enrollment at California State University, San Bernardino Palm Desert Campus, will balloon from the current 1,100 students to 3,000 in 2018 and to as many as 8,000 in the next 10 to 15 years.

The growth hinges on the university board of trustees’ approval of a draft master plan involving as many as 10 academic buildings on campus, expanding the indoor space from about 60,000 to 1.5 million square feet.

“We’re going to make this a real campus here,” Dean Sharon Brown-Welty beams. “The goal is to be the first choice for Coachella Valley students who are considering a four-year university.”

Brown-Welty, who began her tenure on the Palm Desert campus in 2014, has emerged as a transformational figure and champion for higher education in Greater Palm Springs. Formerly the associate director of the doctoral program in educational leadership at Fresno State, where she held many administrative positions since 1993, she maintains a sharp focus on local business and industry to ensure the campus turns out well-educated and highly skilled talent for the workforce here.

CSUSB began offering classes in Palm Desert in 1985, and the current campus opened in 2003. It welcomed its first freshman class in 2013.

The long-term goal is to establish CSU Palm Desert, separating from the mother ship in San Bernardino. Brown-Welty says the first step is attracting students and retaining more of the best and brightest here for their education and professional career.