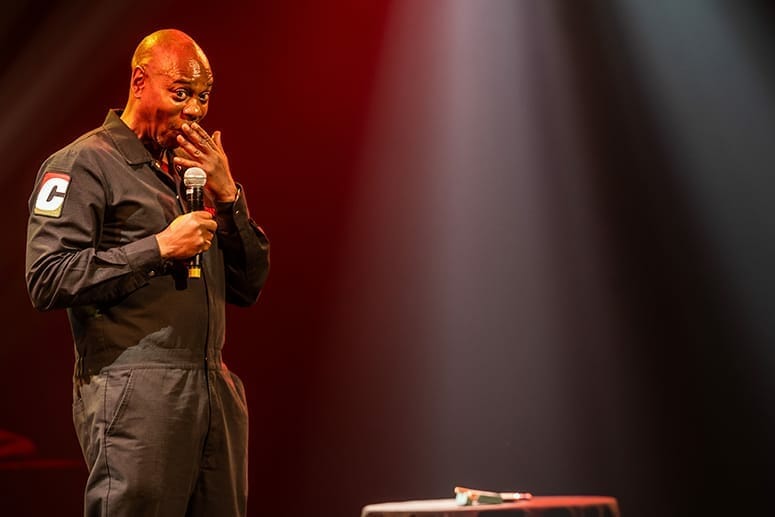 Stop by Coda Gallery in Palm Desert to browse David Dornan’s photorealistic paintings of flowers, oilcans, and other subjects, which take on new depth under his observant eye.

Meet local LGBTQ+ folks and their allies at Grand Central Palm Springs. Bring your appetite, plus a brand-new, unwrapped toy for the tots at the Boys & Girls Club of Cathedral City.

The pair of comedy legends performs in the round for the official grand-opening performance at Acrisure Arena in Thousand Palms. With the stage at the center, there won’t be a bad seat in the house.

Prepare to be hypnotized — perhaps literally — by Ron Stubbs, who compels audience members at Marvyn’s Magic Theater in La Quinta with improvisational comedy and his astonishing power of suggestion.

This Florida–born baritone sings “A Little More Country Than That” and other twangy tunes at Fantasy Springs Resort Casino in Indio.

Delia Ephron (who co-wrote You’ve Got Mail with her sister Nora) stops by the Rancho Mirage Library to share tales from Left on Tenth: A Second Chance at Life, her moving memoir about battling cancer in the midst of new love.

“Run Rudolph Run” to the Palm Canyon Theatre in Palm Springs for a festive fundraising concert. Donate canned goods or gifts for kids to bring holiday spirit to local nonprofits.

On the heels of their 50th anniversary tour, the four-time Grammy winners (who just reunited after 25 years) tear up the stage at Acrisure Arena in Thousand Palms.

Nick Paul’s magical and comedic acumen nabbed him a consulting gig on The Tonight Show With Jimmy Fallon. See his spectacular tricks at Marvyn’s Magic Theater in La Quinta.

Bundle up and come on down to the Center Lawn at The Gardens on El Paseo in Palm Desert for a holiday movie night under the stars. This week’s film stars Tim Allen as St. Nick.

This McCallum Theatre concert honors The Boss and his iconic E Street Band with note-for-note renditions of the Jersey-born artist’s greatest hits, including oft-misunderstood political powerhouse “Born in the U.S.A.”

The “Midnight Train to Georgia” singer, who first performed on TV at age 8 and went on to garner fame as the frontwoman of The Pips, brings her signature Empress of Soul sound to Yuletide favorites at Fantasy Springs Resort Casino in Indio.

Musician Tony Kishman perfected his Paul McCartney tribute playing the “Blackbird” writer in the musical Beatlemania. He honors the legendary Beatle in his show at Spotlight 29 Casino in Coachella.

Breakfast With the Grinch: Dec. 17

Devour donuts, design a cute wooden ornament, and meet Whoville’s greenest and grumpiest resident at this kid-focused craft event at the Create Center for the Arts in Palm Desert.

Star Party at the Monument: Dec. 17

The International Space Station may not be accepting tourists just yet, but you can explore the skies Earthside thanks to the binoculars and telescopes of the Astronomical Society of the Desert. Count constellations at the Santa Rosa and San Jacinto Mountains National Monument Visitor Center.

After playing four games in the Seattle area and 16 on the road, the Coachella Valley Firebirds hockey team makes its debut on home ice at Acrisure Arena in Thousand Palms.

Coachella Valley Repertory puts on Lisa Kron’s theatrical adaptation of an autobiographical graphic novel by Alison Bechdel. The Tony winner is the first Broadway musical with a lesbian protagonist.

A song-and-dance duo follow a pair of singing sisters to snowy Vermont in this romantic musical version of the 1954 classic film. Hum along at Desert TheatreWorks in Indio.

Shop for every art lover on your list at the Artists Center at The Galen in Palm Desert, where the Artists Council vends 8-inch canvases, ceramics, and other gifts.

Beyond Van Gogh: Through Dec. 27

Step inside 300 famous Van Gogh artworks at this immersive exhibition at the Empire Polo Club in Indio that projects the artist’s paintings on the walls and floor.

The Living Desert Zoo and Gardens in Palm Desert twinkles by night with holiday light displays. Grab a hot chocolate and snap a photo with Santa.

Magic of Lights: Through Jan. 1

Phillip K. Smith III: Through May 21

View the formal table settings that the Annenbergs set out to entertain presidents and royals at Sunnylands Center & Gardens.