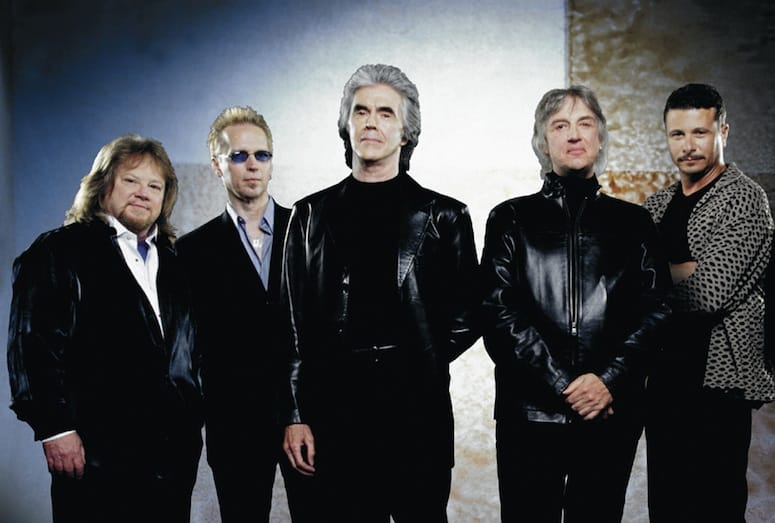 It takes a special breed to put down serious roots in Laurel Canyon, and that’s exactly what Three Dog Night vocalist Danny Hutton did more than four decades ago.

“I bought my house from Alice Cooper in 1977 or ’78, and Mickey Dolenz [of The Monkees] lived next door,” Hutton recalls. “Except for [legendary 90-year-old “Oldies But Goodies” DJ] Art Laboe, I may be the second oldest living guy living here in the business. [Hutton is 72.] There aren’t any houses around me and I’m on a hill, overlooking another hill with pine trees. It’s not like a West Coast thing, but more like I’m up in the forest! And I’m about 12 minutes from the Sunset Strip, so it’s the best of both worlds.”

Three Dog Night will bring the best of its legendary catalog — which contains 21 Top 40 hits, including the No. 1 singles Joy to the World, Black and White, and Mama Told Me (Not to Come) and other instant-singalong favorites like One, Liar, and An Old Fashioned Love Song — on Aug. 21 to the Morongo Casino, Resort & Spa in Cabazon. While on a short tour break, Hutton (pictured at right) recounted how and why he first came to Southern California, why singing harmony comes naturally to him, and what fans will get from Three Dog Night’s live set. Spolier alert: It’ll be joy to you and me.

When did you first come to Southern California?
“I was born in Ireland [in 1942], and we moved to Boston when I was four-and-a-half. I was there until about age 12. One day, my mother said, ‘Let’s move to Hollywood!’ (laughs) She didn’t even say L.A. — she said Hollywood. So we got on the train and went. She had $300 on her and we knew some family friend from Ireland, and we stayed about a week with them. She got a job as a waitress. It was tough at first, but I loved it. Eventually, we moved into a house right under the Hollywood sign.”

You must have some great stories from those heady Laurel Canyon days of the 1960s and ’70s.
“Oh yeah! The party house was a little further down the Canyon in the early ’70s, the crazy days. It was a little house, but I knew they knew how to throw parties when I got a knock on the door, and it was John Lennon and Ringo Starr. They said, ‘Can we come in?’ And I said, ‘Uh, yeah, I think maybe that would be OK.’ Party crashers! (chuckles) They came with Harry Nilsson, too.”

You and Lennon were also friends, right?
“Yes. That was during The Lost Weekend, when Lennon was out ‘harassing’ people. [The Lost Weekend was Lennon’s description of his 18-month relationship with May Pang in 1973-74, while he was separated from Yoko Ono.] No, he was a real gentleman. And I knew Ringo from over in England. So that was a highlight over at my house.”

You also enjoy being in Palm Springs too, don’t you?
“I love Palm Springs. I have a couple of friends who have just bought houses in the area. I love the architecture there. And I love the desert, too.

“Our keyboard player Jimmy Greenspoon, who passed away [in March] and was just a wonderful talent — his family had a house in Palm Springs, and he went there most every summer. He was there a lot. Esther Williams lived across the street, and he got to know her kids.” I can see a throughline between the harmony style of Three Dog Night and The Beatles. Would you agree with that?
“Absolutely! When I was a solo act [before co-founding Three Dog Night], I always used to do three-part harmonies myself, with myself in the background, so I was always into harmonies.”

As somebody who’s been singing almost all his life, how do you keep your voice in shape?
“Well, I don’t smoke anymore. I started when I was probably 20, and then I stopped in the ’80s. I was doing two packs a day. I probably could have sung better in the ’70s if I had stopped smoking earlier than I did.
And now I can sing higher in my natural voice than I could when I was in my 20s.”

One of your showcase songs, Liar, has such key vocal moments, and you have to be able to get there for the audience to really feel it.
“Yeah. I only consider myself an OK singer. Cory [Wells, Three Dog Night’s other co-founding lead vocalist] is a gifted singer; he’s fabulous. I think I’m a great harmony singer, which sounds funny. But as far as hitting really powerful high notes, I think of myself as a horn. I can hit really high, and it adds a brightness to the harmony triad.”

Is there a particular song in the live set you consider to be a highlight, harmony-wise?
“Probably Never Been to Spain — those choruses are in my sweet spot. I can see people in the audience watching us singing the lead, and when we make the shift, “Vooop!” — they turn and look at me, because I hit one of those notes that vibrates. It’s crazy.

“And there’s a middle part on a new a capella song we do, Prayer of the Children, where we do that too. Those are the two magic moments where everything just connects.”

I like how you can’t exactly categorize Three Dog Night music.
“We were never that kind of group, and you couldn’t do that with our albums. We were on every chart from easy listening to pop, rock, R&B, and country — we did everything. A lot of the critics didn’t get it, and they couldn’t put us in a bag of a certain type of music.

“And we sound so different on different songs. We’ve got a funky song with Cory, and then Chuck [Negron, former Three Dog Night lead singer on songs like One and Joy to the World] would be doing a ballad, and I’d be doing a pop song — it was all different. And the musicianship — Michael Allsup is one of the finest guitar players I know. I sit there and go, ‘Do B.B. King,’ and he can just do it.”

How would you summarize the legacy of Three Dog Night as it stands today?
“We’re not rookies. (laughs) Our audience would say, ‘Wow, what a tight, good band. What great singers. What great songs, with great melodies. They have a lot of fun onstage, and people leave with a big smile on their faces.’ The bands that only go out there and only want to play the new stuff, and not the hits — that’s just not what we do.”

Sometimes you forget how many Three Dog Night songs you automatically know. They’re so ingrained into your listening DNA that when you hear them, you go, “I know this song, and this song, and this song!” You know them all.
“We have young people who will come up and say, ‘I don’t know Three Dog Night,’ and I’ll say back, ‘Yeah, yeah you do.’ And then I’ll just hum something and they’ll say, ‘Oh yeah, I know that! Is that you?’” It sure is! (laughs)