Thunderbird Car Created a Legacy Forever Be Tied to the Desert 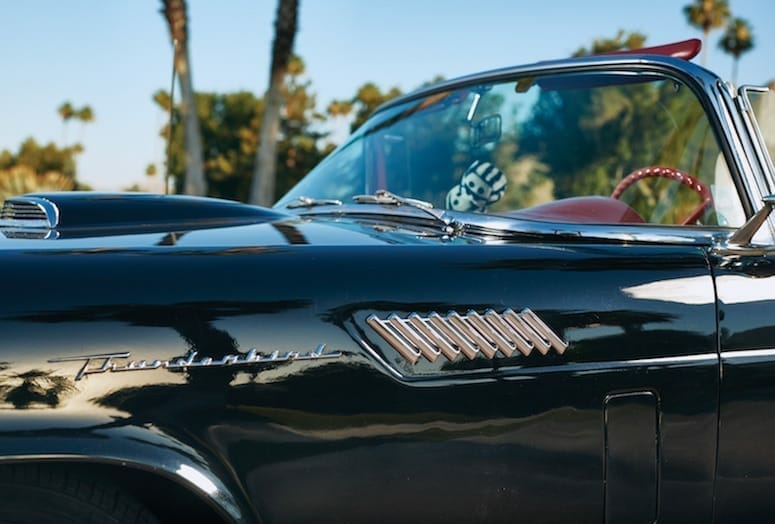 Sleek Lamborghinis and fast Maseratis draw furtive glances around town. But classic Thunderbirds — models from the mid 1950s and early ’60s — attract what matters most: fawning adoration. “Go to one of the Cruise Nights on El Paseo and you’ll see,” says Edward Chiaramonte, a Coachella Valley native and president of the Palm Springs Classic Thunderbird Club, an international organization with more than 100 chapters. “I think it’s because classic T Birds and Palm Springs go well together; they have a history.”

In the early ’50s, Thunderbird Country Club member and Ford Motor Company chairman Ernest Breech allegedly sought permission to name the sporty vehicle, a competitor to Chevrolet’s Corvette, after the club. He got it in what is speculated as a gentleman’s “nod and a handshake” agreement. Neither Ford nor the club can verify the transaction; however, according to members and local cognoscenti, the deal was hardly surprising. 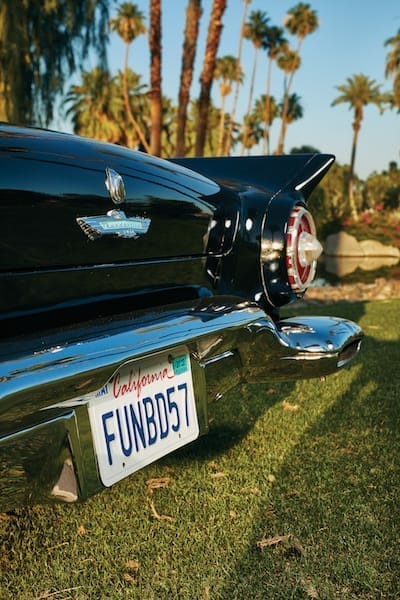 The country club’s president, Johnny Dawson, had reportedly been involved in the Thunderbird’s prototype stage in Dearborn, Michigan. While the extent of his input in the final model is unknown, Dawson was well rewarded. He and his wife, Velma, were among the first to drive the car after its October 1954 debut, according to historical documents.

The car was an instant hit. Online car news sites such as Carscoops.com indicate that the Thunderbird sold exceptionally well in its first year — so well that the Thunderbird outsold the Corvette by more than 23 to one in 1955, with 16,155 Thunderbirds sold versus 700 Corvettes. Stories also reference the car’s 1957 redesign, which included a reshaped front bumper and a larger grille, tail fins, and tail lamps. Those mid-late ’50s models, the car’s sweet spot, inspired pop culture. The Beach Boys sang about it and teenagers flocked. The T Bird also instantly resonated with movie stars, who at the time had made Palm Springs their personal playground. 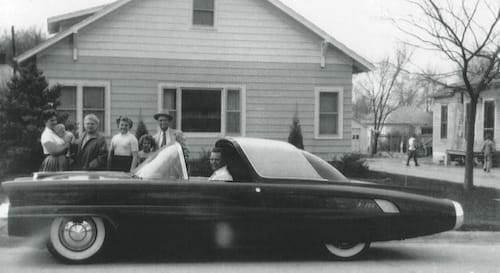 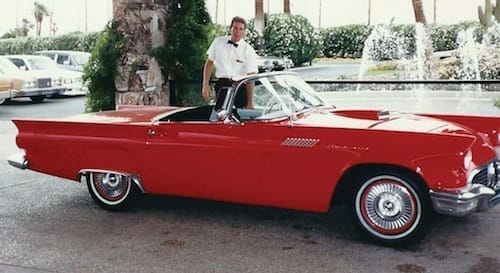 The celebrity automobile party in Palm Springs coincided with the city’s new status as a hot Spring Break destination, which, according to Chiaramonte, instigated even more T Bird cruising (think: Palm Springs Weekend). Eventually, car collectors descended into the ever more populated area. Excitement was hardly limited to the T Bird. “In the ’60s,” he says, “you began to see more high-end cars — Rolls-Royces, even classic hot rods.” Soon, the era of locals crushing on yesterday’s cool rides officially dawned. 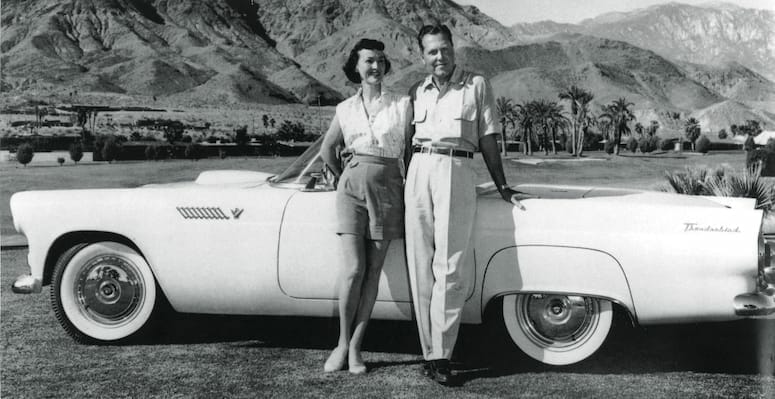 PHOTOGRAPH COURTESY THUNDERBIRD COUNTRY CLUB
Velma and Johnny Dawson received one of the first T Birds off the assembly line.

Nan Shipp, a member of Thunderbird Country Club, was recently unable to resist the spell of an erstwhile fetching automobile: a pink ’57 T Bird. “This is a crazy folly on my part,” she says, “but it will be fun for a while.” Shipp’s whim isn’t without value. It illustrates how something as frivolous as a kick-in-the-pants vehicle can elevate the spirit.

Bill Ford Jr., executive chairman of Ford Motor Company and great-grandson of its founder Henry Ford, would appear to agree. In a letter congratulating members on the the country club’s 50th anniversary in 2001, he noted, “the [Thunderbird] name we share has brought us good fortune,” and that his father “spoke highly of the club and shared stories about his visits with Ernie Breech and Johnny Dawson.” Ford also expressed his belief that “the future looks bright.” 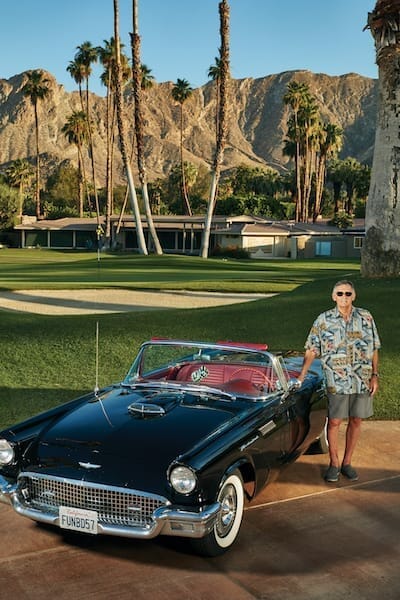 Edward Chiaramonte and his ’57 Thunderbird.

It’s tough to argue the point. The sight of classic T Birds purring languorously along El Paseo and Country Club Drive reminds us, like the mythological bird itself, that divinity is near. Whether in flashes of lightening and rolling thunder of a dark season that’s all but passed, or the golden rays of hope that dapple the edges of skyscraping palms, those cars symbolize the valley’s legacy, its firm foundation. One where the sun always rises — and the engine always starts.

• READ NEXT: National Philanthropy Day Honors Those Who Show Extraordinary Generosity and Compassion.