Timm Bennett is Indio Business' Version of The Iceman Cometh 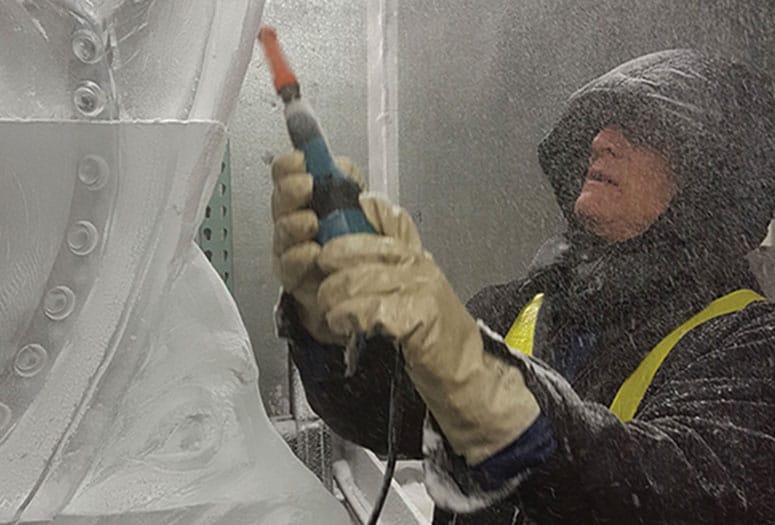 Unlike most inhabitants of  the desert, when artist Timm Bennett wants to chill, he goes ... to work. That’s because as  an ice sculptor for Ice Magic in  Indio, his job requires him to work in temperatures of  10 degrees or below.

A native of the Midwest, Bennett has called the Coachella Valley home for more than 30 years. In that time, he has created large-scale ice sculptures for weddings, holidays, corporate events, and mega music festivals. From centerpieces to three-dimensional portraits of famous and non-famous desert dwellers, Bennett has made all sorts of cool things. He even constructs full-size, full-service bars. “There are bartenders working behind them, and they’re made entirely out of ice,” he says. “You can pour martinis through them.”

His path was not always ice-centric. Bennett tried his hand at cooking school in New York but didn’t really get into it. “And then I ended up in a hotel, doing ice. It was 1982, a crazy long time ago. Eventually, in the ’90s, I got into my own business of doing it.”

Over the years, his process has changed. “It used to be we’d have 300-pound blocks of ice, roughly 20 by 40 by 10 inches thick,” he says. “I’d take that, draw on it, and then cut it with a chainsaw.” Now he has a CNC prototyping machine, which allows him to design on a computer.

Bennett works out of a studio located at the Arctic Glacier Premium Ice Company, which supplies packaged ice to Costco, Walmart, and Coachella Festival.

The humor of making ice sculptures in the desert is not lost on Bennett. “I was born in Chicago, so I know what cold weather is,” he says. “And now I live in the desert and work in a freezer. It’s kind of ironic. But I’m lucky to do what I do. I love it. I get to do art and make a living. It’s wonderful.”