Tips on Choosing a Racquet for Tennis Enthusiasts 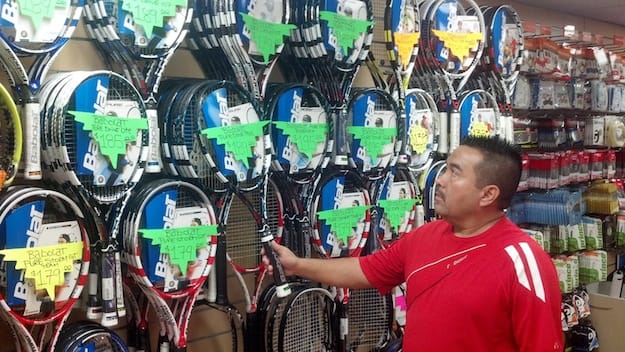 When it comes to tennis rackets, recreational players want to use the same equipment they see their favorite tennis stars swatting with on the court.

Rafael Nadal's Babolat AeroPro Drive is the most popular racket on the market, according to Racquet Sports Industry magazine. The Andy Roddick endorsed Babolat Pure Drive is the No. 2 selling racket. Both rackets are classified as mid-plus with a 100-inch frame.

Roger Federer is widely considered the best player to ever play the game, but his Wilson tennis racket is not as widely used. Federer plays with a 90 square inch racket with a much smaller sweet spot. Since he's the greatest, he can get away with it. But for those of us who have not won 17 Grand Slam championships, we would benefit from the larger hitting area of a 100-inch mid plus, or a 110-inch oversize racket.

Whichever racket you buy, with prices typically ranging from $179 to $209, you are holding a much more advanced piece of equipment from what players were using just a few years ago.

"Technology has made not only the rackets better," said Indian Wells Director of Tennis Tom Fey, "but the strings as well."

The string is the thing you don't want to copy your favorite player on.

To get more spin on the ball, most of today's tennis professionals have taken to using polyester string in the cross (horizontal) strings and gut in the main (vertical) strings.

The polyester string allows the pros to swing hard at the ball and generate a great deal of spin. The gut gives them the directional control on the ball.

The problem with recreational players using polyester string is, "You have to crunch the ball and swing like Nadal," Fey said. "Plus the polyester string goes dead faster. Pros can change strings every day."

Master Racquet technician Juan Imazu has been stringing rackets for 25 years, the last seven as tennis manager at Pete Carlson's Golf and Tennis in Palm Desert.

"Natural gut is the best string ever," Imazu said. "The reason I don't recommend polyester is it doesn't hold tension as long as other strings. That can cause a lot of arm problems."

Fey said only about 10 percent of tennis players would benefit from stringing their rackets like the pros.

"For most players, gut would be the best string. It performs the best and is easier on the arm, regardless of your level of play," Fey said.