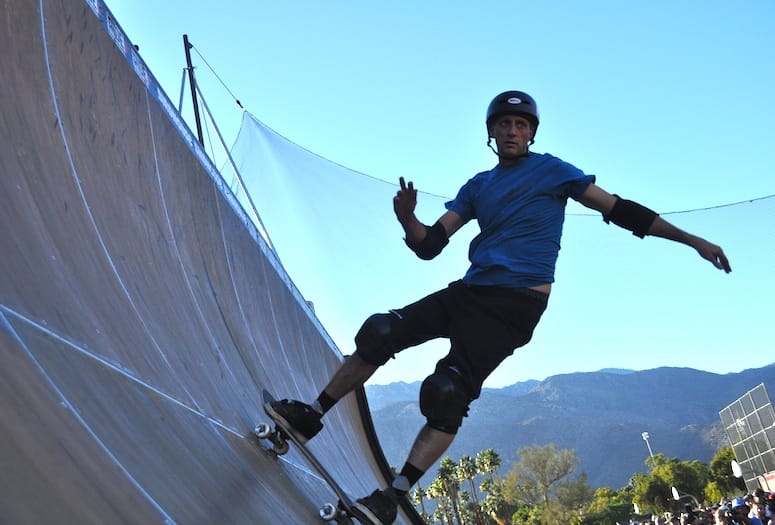 But at age 46, he’s found a way to stay on his board without compromising his body.

“I don’t do it as dangerously as I used to,” says Hawk, who was in Palm Springs on Jan. 24 for the inaugural “El Gato Classic.”

“I’m not trying to push the height or distance limits, but I have learned new way to guide my style into something more technical,” he adds. “So the tricks that I learned as a kid, I have found a way to elevate them into harder and harder tricks.”

“Eddie was my hero growing up, and I’ve kept in touch with him over the years,’ says Hawk. “But for him to take on such an ambitious event, I was just honored to be invited.”

Joining the duo were Steve Caballero and Kevin Staab, while Christian Hosoi took the mic for much of the demonstration due recovering from knee surgery.

The legends gave a nod to the next generation of skaters, including  “skateboard prodigy” Evan “Big E” Doherty, 11, and American professional skateboarder, Tom Schaar, who at 15 is the youngest skateboarder to land a “900”.

Hawk, whose Tony Hawk Foundation raises millions to help build skate parks around the country, says the next generation of skateboarders has to keep the passion that has driven the sport since the 1960s.

“You got to do it because you love it,” he says. “You have to keep challenging yourself because as soon as you rest on your accolades, they will forget you.”