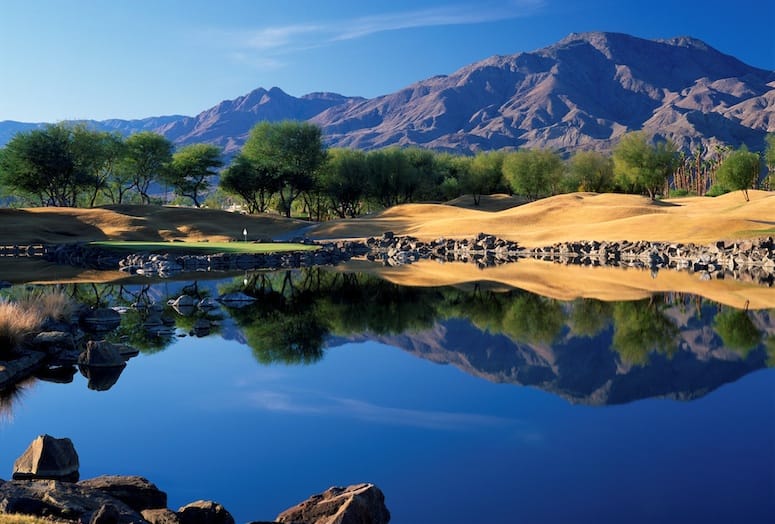 The close of the visitor season brings on the annual "Spicer vs. Spicer" golf matches, which pit me against my dad.

Is there a better place to set bragging rights than the TPC Stadium Course at PGA West?

Accolades for the Pete Dye design run as long as the designer's vast moguls on this true player's track, which was recently ranked by Golfweek as the ninth-best public course in California and recognized by Golf Digest as the state's No. 5 daily rate play (both charting the Stadium as the top public course in the valley).

But with familial pride on the line, the only ranking that really matters once tee meets turf is who can thrive (and in some instances "survive") the Stadium's run of visual mind games, rolling lies, and water hazards (appearing on nine holes).

The match play showdown began with an edge to the progeny, as I took a two hole lead thru four. Evidencing the tenet of patience, the old man battled back to tie the match two holes later.

The ninth hole, a 452-yard par-4 "Reflection" at the TPC Stadium Course at PGA West.

Heading to No. 9, the 452-yard par-4 "Reflection," we collectively struggled on the Stadium's top-handicap hole, though I would take a one hole edge after recording a double while my playing competitor found the right side water and authored a hefty seven.

Turning to the back, Pops got me on my favorite hole, the tee-testy 10th, before I would go back to holding a one-up lead on 11 through 13.

With the mid-afternoon sun matching the ascending heat of the showdown, Pops would square the match on 14 and hold on 15 as the potent Stadium setting found us even heading to the final three holes.

The 600-yard, par-5 16th – aptly-named "San Andreas Fault" for those finding the mammoth bunkering to the left — went to the son. I was able to bomb a tee shot safely to the right before finding a merciful lie behind the green on my approach. After getting up-and-down for a par, I would take a one-up lead to Alcatraz. Father and son enjoy the day out of the course.

The 168-yard island green is no doubt the desert's most famous hole, and the added texture of heading to the visual intimidator only enhanced the gravity of the match. . . . which, I can proudly offer, went to Yours Truly.

And while I'm undoubtedly pleased to stand atop the Spicer podium for this season (something the Old Man has done for the past two years, I might add), said moment is ultimately a prideful aside to the surely lasting memory of heading to the 17th with something on the line.

Read it as corny if you will, but riding up to the Alcatraz with my dad with a chance to close him out is what the game is all about for me. We're not playing for $1 million, there's no actual trophy to be lofted, and a spot at The Masters won't be won.

Rather, it's the knowing that we're sharing a moment as father and son, amid some tangible pressure, with shots to be revisited for a match that really never ends . . . whether we would hit that island green or not.