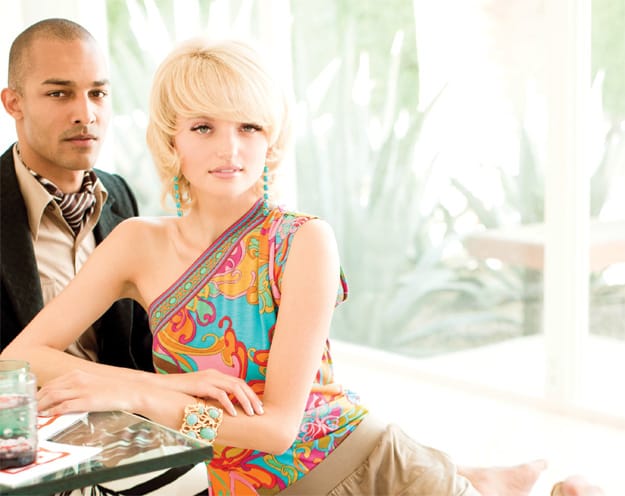 Trina Turk considers herself lucky on two counts: first, because she knew at a fairly young age what she wanted to do when she grew up (design clothing professionally) and, second, because she is succeeding at doing so beyond her wildest dreams.

Born in California and raised here and in the state of Washington, Trina learned to sew at the age of 11. She studied apparel design at the University of Washington and took her first job with Seattle-based Britannia Jeans. Her next stop was Los Angeles, where she waded into a sea of 30 prints per season, designing surfwear for Ocean Pacific.

Inspired by California’s multicultural mix, architecture, and landscape, The Trina Turk Collection is full of the season’s most casually sophisticated silhouettes. Trina’s philosophy is to create wearable, optimistic fashion that incorporates the best aspects of classic American sportswear.

Trina has drawn constant inspiration from the cocktail party and poolside lifestyle of the desert, so it was fitting that the first Trina Turk boutique opened in March 2002 in Palm Springs in a modernist building designed by Albert Frey. (The flagship store in Los Angeles is an airy, pink-hued space.) In December 2006, Trina Turk New York opened, bringing a splash of California color to the neighborhood. In 2008, Trina opened a boutique next door to her Palm Springs store to offer her distinct flair to residential furnishings. Boutiques at Fashion Island in Newport Beach, Burlingame, and Bal Harbour Shops in Miami, Fla., are the company’s latest additions. A summertime-only shop in East Hampton will open this May.