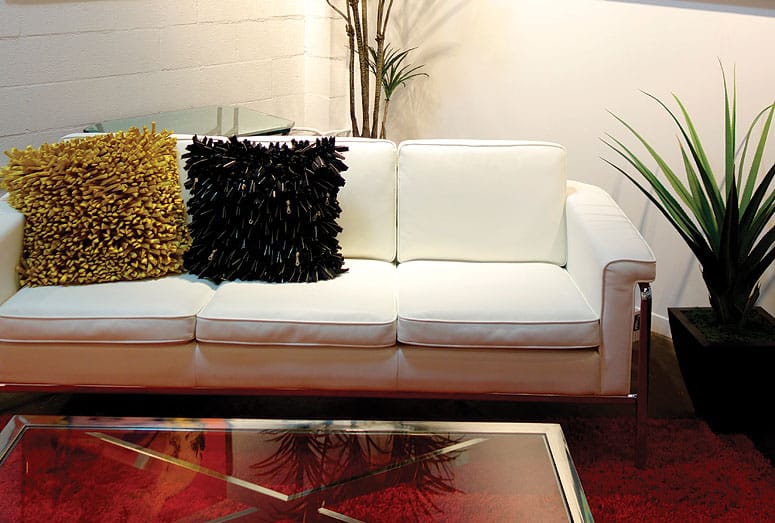 Big change often starts small. Such was the case in 2002, when fashion designer Trina Turk set up shop within a depressed section of Palm Springs’ North Palm Canyon Drive.

Indeed, the namesake boutique, featuring colorful apparel divined from the 1960s, produced the first spark of life in what would ultimately become the Uptown Design District.

Other pioneers to the area soon followed, among them the home décor shops Modern Way and A La Mod, whose iconic midcentury furnishings include Herman Miller chairs, curved Arco lamps, and vintage gold-trimmed barware.

The district galvanized with the addition of such eateries as Jake’s and Trio. But not until the past several years did something magically contagious sweep through this six-block, palm-lined stretch between Alejo Road and Tachevah Drive.

“In 2012 and early in 2013, we really started to see the district evolve,” says Chris Mobley, who owns the retro décor and accessory shop Just Modern. In just the last year, Mobley has witnessed the arrival of several new businesses to the Uptown Design District, including the Jorge Mendez Gallery, specializing in contemporary Latin American art; Pelago, offering contemporary lighting and tabletop accessories; Highest Form, a designer-owned urban apparel store; and the 11,000-square-foot Design 849, presenting an eclectic mix of urban modern, glam, and bohemian-chic art, home furnishings, and accessories.

Also new are The Shops at Thirteen Forty Five, a design collective occupying the historic Harold Hicks building, whose clean architectural lines inspired Julius Shulman to photograph it in 1959.

“We wanted to do something similar to Fred Segal in Los Angeles, with several proprietors under one roof,” says Stephen Wilson. Wilson and his partner, Brandon Hoskins, founded and opened the collective in February 2013 with three stores, including their own shop Towne, which features vintage and modern furniture and accessories.

For visitors who want to stay uptown, the boutique Skylark Hotel opened in December 2013 with new owners and fully revamped to its original 1955 glory, replete with primary colors and reproductions of midcentury Danish walnut furnishings throughout all 29 rooms.

No doubt the hotel’s centerpiece, the 24/7 swimming pool, will serve as an über cool end to a day hunting for hot vintage treasures.