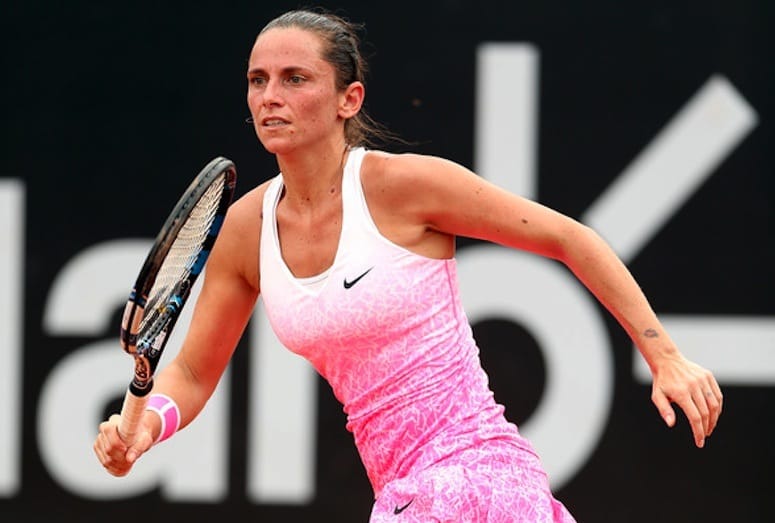 One of last year’s U.S. Open women’s finalist was out on Stadium 3 Monday at the BNP Paribas Open at Indian Wells, doing her usual surgery. Most players bring rackets to these tennis matches. Roberta Vinci brings a scalpel and thumb screws.

Vinci, the 33-year-old Italian veteran, did what she so often does in matches in which the opponent holds still for the operation. She won. Convincingly. At 6-1, 6-3. In 61 minutes.

The victim was Elina Svitolina of the Ukraine, who is hardly a straw doll. She was seeded No. 17, just eight below Vinci. But when it was over, she had the same look so many have had in Vinci’s 18-year career, the look of “I just bled to death and I never even saw the knife.”

Vinci, all 130 pounds of her, can play the net — she has won all four major doubles titles in that capacity — and she can mix the slice and topspin to the point where an opponent is so confused she wants her mommy. If Vinci played baseball, she would be a high-paid changeup pitcher.

She can hit with power, she can dink. Mostly, she will drive her opponents to drink.

The rap against her has always been that she couldn’t play with the big girls, that when she got against the power hitters, their bombs out-blasted her bb gun. Then, in one glorious, stunning moment last year, that reputation was over. Roberta Vinci won convincingly on Monday over Elina Svitolina of the Ukraine, 6-1, 6-3, in 61 minutes.

It was the U.S. Open women’s semifinals. Vinci had somehow made her way to the huge court and the big moment — especially big because of her opponent that day. Serena Williams stood across the net, a season in her rear view mirror so dominant that she had won the previous three majors and was going for an historic calendar year Grand Slam. This was going to be easy. What a setup. Not only was Williams going to the final, but she had what felt like a walkover in the semis. Your Vegas bookie might have given you 100-1 odds on Vinci.

Afterward, when asked point blank about it, Vinci said, no, she didn’t think she could beat Serena. Players never say that. They always see the silver lining in a thunderstorm. Vinci was just being honest. She had no chance and everybody, including her, knew it.

So she brought her usual tool and carved away as she always had. Roberta Vinci knows no other way, nor is she physically built for any other kind of game. And, lo and behold, there was the No. 1 player in the world, the most dominant female player of her era, coming apart across the net, eventually bleeding to death without ever seeing the knife.

People who have watched tennis for decades, who know the game and its eventualities, called it the biggest upset in memory, maybe of all time. Vinci would have agreed with all of them.

So, Williams was deprived of her Grand Slam and tennis fans thought they had been deprived of a chance to see history. That was true, but it wasn’t total deprivation.

The next day, Vinci went out to play the final against her friend and countrywoman, Flavia Pennetta. It was a good match. Pennetta won and announced her retirement immediately afterward, to all 21,000 fans in attendance and a worldwide audience.

But before she did, and before she accepted her trophy and championship ceremony accolades, she pulled a chair over next to Vinci and told her friend what she was about to tell the world. There was a little hug, some I-don’t-believe-it looks and even some giggling. It was a storybook ending, just not the story that the tennis world expected.

Vinci is now in the fourth round at Indian Wells. Her next opponent will not be whom she expected. Switzerland’s No. 8, Belinda Bencic, was ousted by unseeded and No. 97th-ranked Magdalena Rybarikova of Slovakia. So a trip to the Indian Wells semifinals is not unthinkable at the moment for Vinci.

Which brings up the question of fair play.

Knowing what Vinci brings onto the tennis court each time, should officials not make her walk through a metal detector?