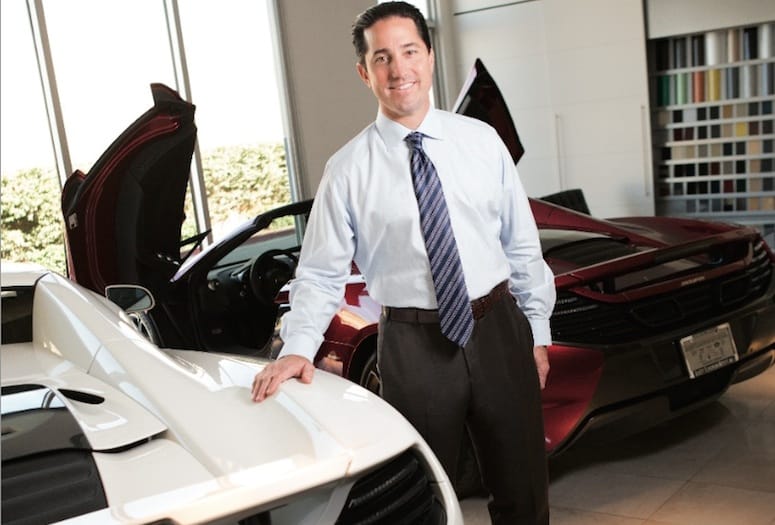 Since acquiring Desert European Motorcars a little more than two years ago, Blue has set out to distinguish the Rancho Mirage campus and leverage the power of luxurious Greater Palm Springs to attract a world-class clientele.

Desert European boasts nine franchises — Aston Martin, Audi, Bentley, Jaguar, Land Rover, Maserati, McLaren, Porsche, and Rolls-Royce Motor Cars — making it the only dealership group in the United States to represent all the British luxury brands, and the majority of European luxury and performance brands, on one campus.

“We’re one of 12 dealers in the United States to have the honor to represent McLaren,” Blue says. “Bringing it to the Coachella Valley is a very special thing for Southern California. And we’re about ready to open our Jaguar–Land Rover facility. It will be the most state-of-the-art Jaguar and Land Rover dealership building in the United States. Immediately after that, we will start on a new McLaren and Aston Martin facility on the central part of the campus.”

Blue began IndiGO with a classic car dealership in 2006 and then acquired Porsche of North Houston in 2010, Lamborghini Houston in 2011, and all the brands represented by Desert European in 2013. Earlier this year, he purchased two St. Louis Porsche franchise stores within four months to become the only Porsche dealer in St. Louis.

Blue seized the opportunity to add McLaren to the Rancho Mirage campus, saying the brand “celebrates design,” which aligns with the values of the Greater Palm Springs community that’s experiencing a renaissance largely buoyed by art, architecture, and design.

“Coming to Rancho Mirage has been an incredible experience,” he says. “We invested in this community a little more than two years ago, and we’ve now reinvested with our new building. We believe in this community today and in the future. Our team members, which now number more than 120, are our number-one focus along with our clients and friends here in Rancho Mirage.”