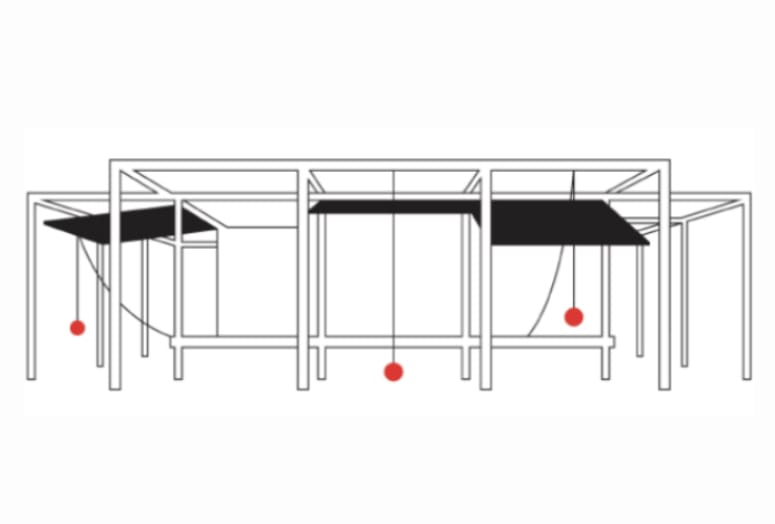 The talk of this month’s Modernism Week Fall Preview, and inevitably the main event in February, will be a structure built not in Palm Springs but on the west coast of Florida. It’s a replica of the 1952 Walker Guest House, an eye-popping specimen of minimalism on the beach in Sanibel Island that its architect, Paul Rudolph, once said, “crouches like a spider in the sand.”

White-painted posts and beams surround the glass-box structure — spindly limbs supporting a dramatic pulley system that encloses and protects the floor-to-ceiling glass with “flaps” akin to hurricane shutters. Counterbalanced by red iron balls, each weighing 77 pounds, the rig gives the house a playful, almost Calder-esque spirit, and its nickname: the Cannonball House.

The re-creation of the 24-by-24-foot house unfolds Oct. 18 and will be on display through March 2020 in “the pit” of the Grit Development in downtown Palm Springs.

“The 576-square-foot house is regarded by historians as one of the great works of modern American architecture,” says Nickie McLaughlin, executive director of Palm Springs Modern Committee, aka PS ModCom, which organized the installation. “The originality of [Rudolph’s] concept and geometry combined with his design for relaxed living make its temporary home in Palm Springs, Southern California’s mecca of modernism, especially relevant.” 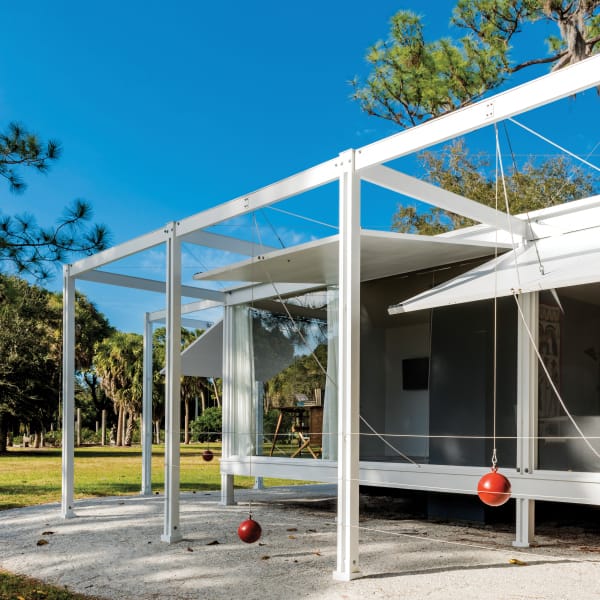 Exterior posts and beams provide the framework for an innovative pulley system that allows the house to close for privacy and protection.

The most striking similarity between Palm Springs and Sarasota modernism is the way their designs adapt to the local climate, particularly with their use of large overhangs and sunshades. Rudolph was the leading figure of the Sarasota School of Architecture, drawn there to work with Ralph Twitchell before going into a solo practice. He designed more than 60 buildings in the area, including the steel-frame-and-brick Riverview High School, his first major nonresidential structure, in 1958, the same year he was named dean of the Yale University School of Architecture.

While the landmark high school was demolished in 2009, despite opposition from the National Trust for Historic Preservation, the Walker Guest House still serves its original purpose — and now a bigger one: In 2015, the Sarasota Architectural Foundation partnered with Bradenton, Florida–based architect and contractor Joe King to fabricate a full-scale replica on the grounds of the John and Mable Ringling Museum of Art. It was built with parts allowing for disassembly so the structure could be exhibited at different venues.

“The installation in Palm Springs will play a significant role in educating us on the work of Paul Rudolph,” says McLaughlin, noting that PS ModCom will offer daily tours as well as a February symposium with authors and architects, including King and Timothy Rohan, associate professor of architectural history at the University of Massachusetts, Amherst, and author of The Architecture of Paul Rudolph.

“Rudolph envisioned the flaps as a way to create dynamic architectural space, which he perceived as a fluid having both volume and velocity.” 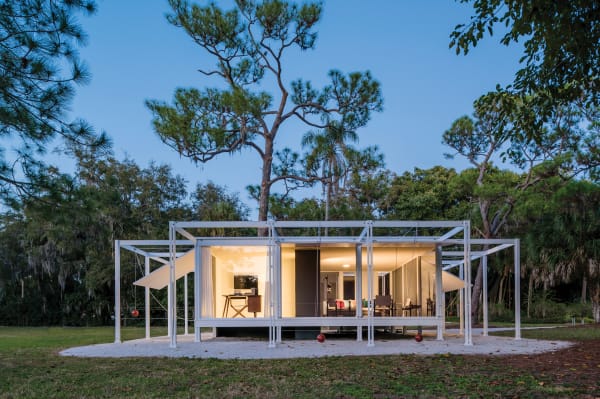 The efficient interior includes living and dining rooms, a bedroom, a bathroom, and
a kitchen, as well as picture-perfect views in every direction.

The effort to bring the structure to Palm Springs began when PS ModCom board member Stephen Rose participated in an architecture tour in Sarasota and learned that the house had been dismantled and stored. He suggested that PS ModCom install it in Palm Springs, and they made it official in June. It was a timely opportunity, considering the city of Palm Springs last year assigned PS ModCom to the downtown development subcommittee. “Having worked closely with Michael [Braun of Grit Development] and his team, it seemed natural to ask him if we could place the house within the development,” McLaughlin says. “He is very supportive of the project.”

Rudolph designed the original house for Walter Walker, the grandson of a Minnesota lumber baron and known for donating his art collection and a chunk of his fortune to create the Walker Art Center in Minneapolis. When Walker was diagnosed with tuberculosis, he sought the subtropical climate of Sanibel Island to recover and commissioned Rudolph to create one of his earliest pavilion structures that lets the sun shine in.

The house became a model of innovation. “Rudolph envisioned the flaps as a way to create dynamic architectural space, which he perceived as a fluid having both volume and velocity,” King wrote in Paul Rudolph: The Florida Houses, the book he co-authored with Christopher Domin. “By adjusting the flaps, the building and its space came into motion, and for Rudolph this could engender a rich perceptual and even emotional experience. He called this the psychology of space.”

In re-creating the structure, King says, “We replicated Rudolph’s elaborate rigging system (Lt. Rudolph worked on ship construction during World War II), including crafting steel counterweights to match the originals’ size and weight, and using ropes faithful to the period.”

Walker loved the house and reportedly took to luxuriating on a hammock strung between two palm trees. His wife, Elaine, on the other hand, needed time to adjust to the tiny living space. She often likened her visits to camping.

The efficient interior partitions into four rooms: living and dining on one side of the structure and bedroom, bath, and kitchen on the other. The original beachfront landmark provided a model for the pre-fab dwellings of the day as well as a prototype for sustainable living. In the replica, a small elevator replaces the bathroom to accommodate visitors in wheelchairs. 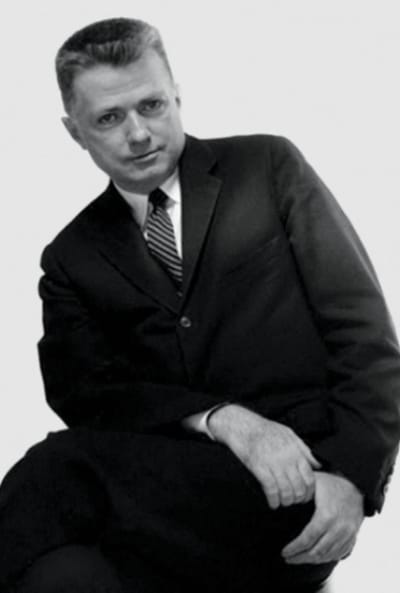 PHOTOGRAPH FROM LIBRARY OF CONGRESS 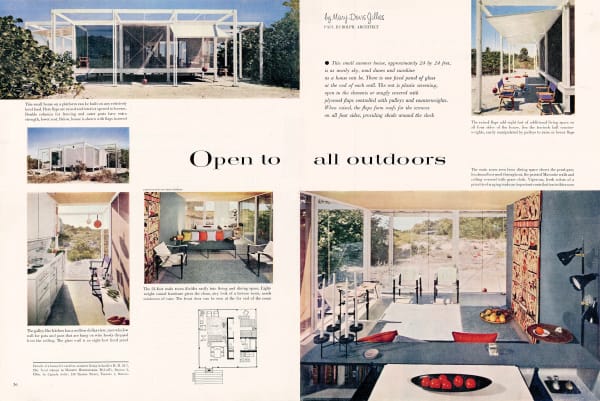