The restored 1955 house is known as the Wave House for its distinctive “wave” roof, which architect Walter S. White patented and created by using wooden dowels with bi-concave intermediate elements.
PHOTOGRAPHS BY TIM HIRSCHMANN

One of Palm Desert’s most notable historic preservation success stories will be celebrated with tours during Modernism Week. After an exacting restoration, the Miles C. Bates “Wave House” will open its doors to the public, Feb, 21-23.

Designed by architect and industrial designer, Walter S. White, the house was built in 1955 for Miles C. Bates, an artist who loved to entertain and often hosted high profile celebrities at his Palm Desert compound.

The house is known as the Wave House for its distinctive “wave” roof, which White patented and created by using wooden dowels with bi-concave intermediate elements. White lived and worked in the Coachella Valley for several years in the 1950s and designed many buildings in the desert. He designed at least 48 homes in Palm Desert alone.

Through an auction conducted by the former owners, the City of Palm Desert, during Modernism Week in 2018, the Los Angeles architectural firm of Stayner Architects purchased the home and have worked to restore the Wave House for the past two years. Stayner Architects is comprised of father and son architects – Gilbert and Christian, respectively. Christian Stayner shares comments with Palm Springs Life about the project:

How extensive was the renovation?

Throughout its restoration efforts, we sought to honor Walter S. White’s design and intentions, while simultaneously introducing contemporary infrastructure and materials to support a new generation of visitors to the historic gathering spot for Palm Desert and Palm Springs artists, actors, and other creatives. We used a light touch, for example, with respect to the existing house’s environmental technologies, inserting contemporary HVAC into White’s innovative underground ductwork, substituting new, higher-performing glazing wherever possible into original and custom-fabricated steel openings, and designing a new wrap-around, automated curtain system for the bedroom and living spaces for solar heat control. To maintain the visual thinness of White’s patented 2X4-composed roofline, while immensely increasing its thermal insulation, we installed an energy efficient polyurethane roof, tapering the new material from 5-inches at its thickest to just few millimeters at the roof’s perimeter.

We also collaborated with the Los Angeles-based Cactus Store and the non-profit Mojave Desert Land Trust, to create a publicly-accessible botanic garden at the front of the Bates House. The resulting garden is composed of almost entirely local plants that were grown by the Mojave Desert Land Trust in their native plant restoration nursery. 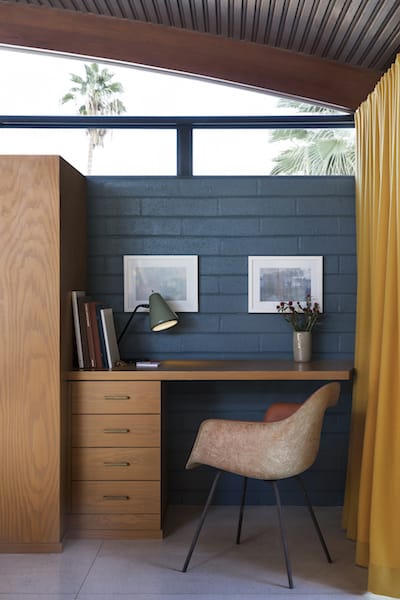 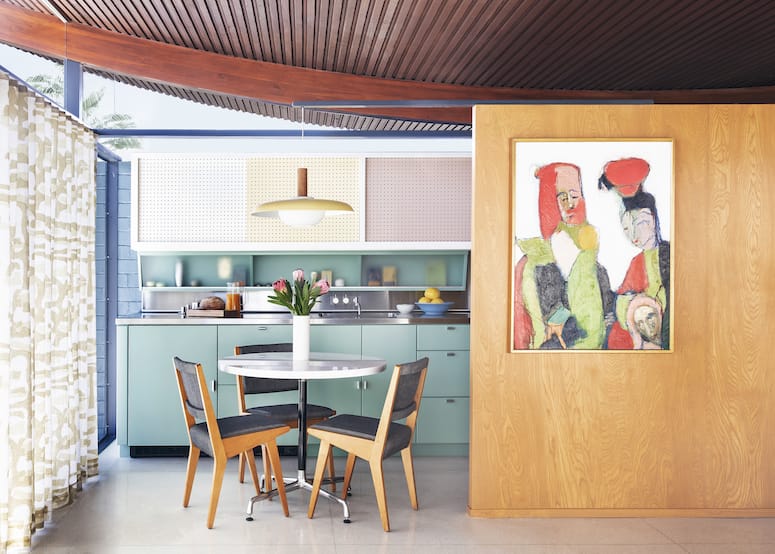 How much of the home remains original?

Much of the home as you see it today is from its original construction in 1955, however we certainly didn’t find it this way two years ago. Perhaps what delighted and inspired us most in the restoration process were the discoveries of original craftsmanship and ingenuity by White that were hidden throughout the house by years of additions and renovations, which had degraded and obscured the original architectural quality. But there was still so much there! For example, underneath thick, textured drywall and many layers of paint, we found the house’s gorgeous, original natural ash paneling. 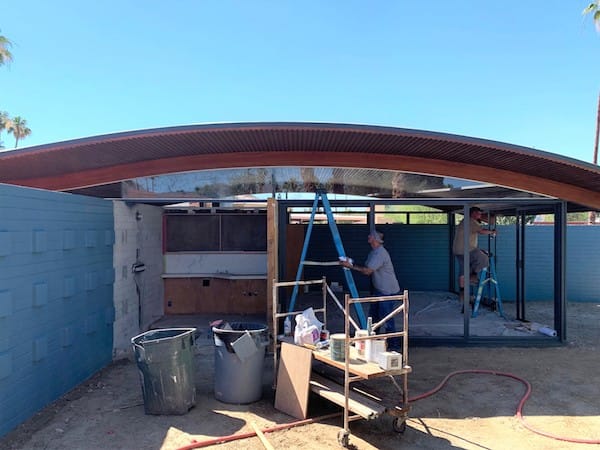 At the 2019 Modernism Week, you could see the Wave House under construction.

Was this considered technically a “restoration,” “renovation,” or a “remodel”

By the time we purchased the Miles C. Bates House in 2018, it had already been listed as a Palm Desert Historic Landmark and had a State of California Historic Designation. Soon after the purchase, it was listed on the National Register of Historic Places.

Given the house’s historic status, we were able to apply for what’s called a Mills Act Contract with the City that reduces property taxes due to the historic nature of the house and our keeping it visible to the neighborhood. Additionally, we’re working on a federal (and, as of Fall 2019, California State!) Historic Tax Credit certification. In order to apply for these programs we’re required to execute all work according to the Secretary of the Interior’s Standards for Rehabilitation. Technically, you could say that the project is a “restoration” or a “Rehabilitation.” To renovate or remodel would be to change the original architectural intent and history, which was definitely not what we undertook here.

Walter White held the patent on the design of the wave roofline – did you acquire that patent with your purchase?

In purchasing the house, we purchased White’s proof of concept alone — we didn’t build a new example of it, which would not be permissible under the current California Building Codes. While the patent for the inventive roof system expired a few years ago, copies of the original patent documents are held at Walter S. Whites archives at the University of California at Santa Barbara. We undertook a rigorous and detailed research process using the archives. Before restoration work began we visited UCSB and poured through his patent documents along with drawings, renderings, and photographs from the Miles C. Bates House and White’s other projects from around the same time.

To our pleasant surprise, the paneling was not only in excellent shape, but also had been skillfully installed and -- despite being built effectively for a bachelor’s summer cabin in the middle of the desert -- it was meticulously detailed. Another discovery was White’s network of underground ductwork, which was an amazing innovation at the time of construction, but had since been abandoned and replaced with ceiling-level ductwork that obstructed the view of the iconic roof. Here we were able to remove the non-historic additions and insert a new and highly efficient HVAC system directly into the original underground infrastructure — restoring White’s vision for above and below the house.

What plans do you have for the home?

From researching Walter White’s papers and our conversations with those who knew him at the time, Miles Bates was a very social person. The house was very much a hub of social life in early Palm Desert. At the same time, this is a very small house — a bachelor pad in the desert. We realized at the start that, while this was in part intended as a vacation home for our family, we also needed to find a way that the community and the greater public could access and experience the house given its importance in Palm Desert’s history and the development of a desert modernism in Southern California. White’s roof design influenced later iconic architectural works like his own Dr. Franz Alexander residence (1955) or the Albert Frey-designed Tramway Gas Station (1965).

Restoration of the Miles C. Bates House represents the first phase of our plans for the home and the property. In 2020 we’ll break ground on two new structures that will add 1,400 square feet of new construction to the site. 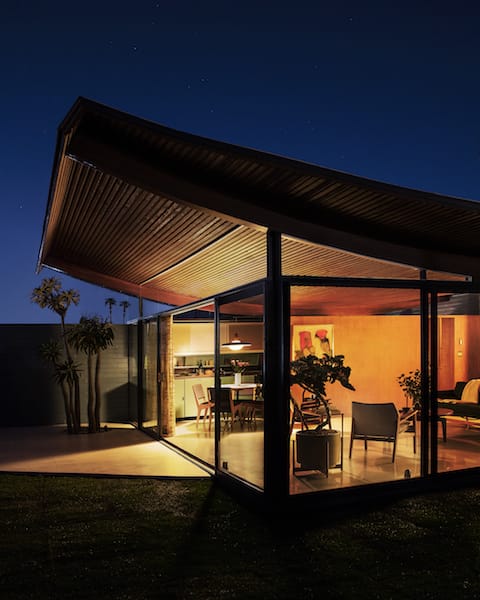 There will be two additional guest dwellings, a commercial kitchen, an event pavilion, and shared pool and spa. Collectively called The Desert Wave, the site will be a new model of hospitality: a micro-boutique hotel that celebrates regional history, culture, and midcentury design. It aims to revive the spirit of creative exploration that was central to the house’s namesake and will be available for select events, artist residencies, and group stays. The Desert Wave is anticipated to be completed in late 2020, and will be designed, built, and operated by Stayner Architects and its in-house management arm.

Will Stayner Architects be on hand during the Modernism Week tours?

We wouldn’t miss it! Along with a group of wonderful docents provided by the Historical Society of Palm Desert, who have been invaluable partners throughout this project, we will be on hand for the Modernism Week tours at the Wave House. The Historical Society of Palm Desert organized tours of the house exactly two years ago during Modernism Week in 2018, when we purchased the house at auction. We’re extremely excited to be home, so to speak, along with volunteers.