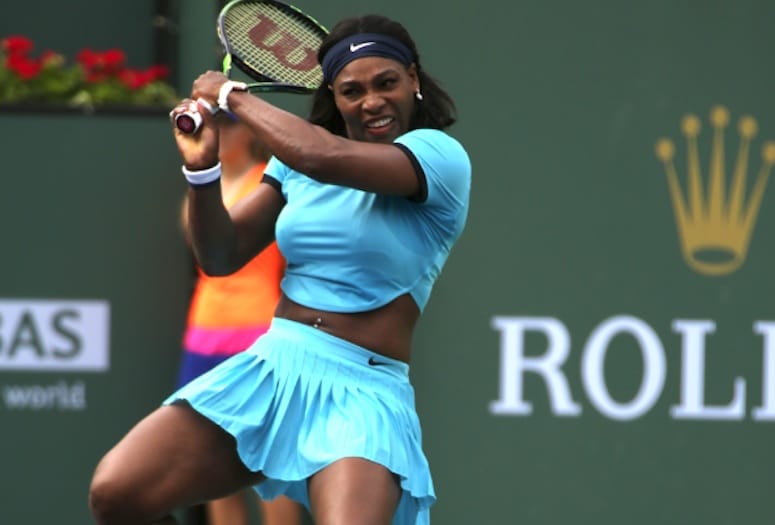 Hollywood figured it out almost as soon as there were movies: Fame sells.

You didn’t need actors who knew Shakespeare — not that it wasn’t acceptable — but actors and actresses who were known. The two worst words for box office weren’t “No talent,” but “Who’s he?” The same thing for golf and tennis.

The late Bill Veeck, who owned the Cleveland Indians, St. Louis Browns (what, you’ve never heard of the team that became the Baltimore Orioles?) and Chicago White Sox understood publicity and promotion.

Veeck signed a midget, Eddie Gaedel, and had him come to bat. Major League executives were irate. “Hey,” Veeck explained, “if you had to depend on baseball fans for support you’d be out of business by Mother’s Day.” class=”photo-description”>Andy Murray's name brings in the crowds to tournaments like the BNP Paribas Open.

In baseball at least there’s team loyalty. Once a Red Sox, Dodgers or Angels fan, always a Red Sox, Dodgers or Angels fan. But if you were a Jack Kramer or Pete Sampras, or Martina Navratilova or Lindsay Davenport fan, then what? Someone new has to get in the headlines, get on ESPN, get on Centre Court — or at the BNP Paribas Open, Stadium Court One.

It usually starts with success, although there are exceptions. Anna Kournikova was a — pardon the sexist adjective — lovely one. Her beauty was more impressive than her backhand, although she could play to a point, if not to enough points. Still recognition in sports invariably comes from winning. Then personality.

After Rafael Nadal won the other day, Craig Gabriel, a longtime Australian journalist asked Rafa, with all his endorsements, his own logo (the horns of a fighting bull) did he consider himself a brand as much as a person. class=”photo-description”>Roger Federer is a recognized brand around the world.

“I think that in America they think this way,” said Nadal. “But I am from Spain. I am from Mallorca, a small village, and for me (it is) difficult to think that way.”

But not difficult for the companies who pay him millions (start with Nike). Or the tournaments, who only can wish Rafa and Novak Djokovic — as well as Roger Federer, not here because of surgery; and just eliminated Andy Murray — keep bringing in the paying customers and on the Tennis Channel, the viewers.

Everyone in this tournament is a superb player.  In a world where millions play tennis, he or she wouldn’t be here. And yet, two years ago when the men’s final of the U.S. Open — our national championship, for heaven’s sakes — was Marin Cilic beating Kei Nishikori, only the purists cared.

The world’s best female player, Serena Williams, may not have logoed clothing, but said, “When you are representing so much stuff and have your own business . . . I consider Serena Williams a brand as well as a person. It is indeed a brand, but it’s a good brand. I’d invest.”

She’s not alone, Charles Pasarell, the onetime ace who 30 years ago helped create the event that became the BNP Paribas, once said, “You have to have players of proven value . . . Otherwise it’s like looking at two guys you wish would hurry up and give you the court.”

As opposed to giving the tournament the boost it needs.