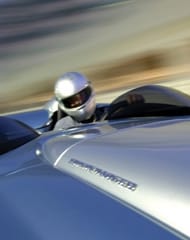 The term “exclusive” is so old and tired that it should be taken outside and shot. It’s been overused in so many ways that it fails to mean anything to anyone with any sense anymore — particularly when it’s attached to cars. We hear constantly about exclusive models, paint finishes, wheels, etc. But few, if any, of the claims ever live up to anything more than lazy PR hype.

So the new word to convey special qualities, particularly in the world of luxury goods, is “authenticity.” A value that cannot be simply slapped on the flanks of any car, boat, or painting to make it seem more interesting and desirable, authenticity has to be genuinely earned.

That’s why Reeves Callaway, father of the stunning C16 Speedster and owner of a hugely successful racing and engineering business you’ll see represented at racetracks and in premium car factories all over the world, uses the word advisedly. When he says his car is authentic, he’s not trying to fool anyone. He’s merely stating some blazingly obvious fact.

That might be hard to understand initially, when you learn that the $305,000 C16 is based on the Chevrolet Corvette. How can a car derived from another have any right to call itself an original? The Callaway philosophy is, “Why develop your own car from scratch when GM has spent $500 million on providing a great base for a specialist car?” But still, why modify?

“It’s all about passion and focus, or maybe a better word is ‘tailoring,’” Callaway says. “As the production car is shaped by the customers it must attract, the specialist car gets a rare opportunity in the car world. It gets to focus or refine its mission for a smaller group: a passionate statement for a passionate group. We can make less compromise and sharpen the message.”

He adds that, as much as anything else, this car is an advertisement for Callaway’s engineering services, so it has to be perfect. “We are not working with Chevrolet on this one,” he says. “We’re spending our own money. The result will be our capability calling card for the next engineering job. This isn’t for fun; this is for keeps.”

As calling cards go, the C16 Speedster isn’t like any other you’ve ever seen. You don’t have to delve into its specifications to appreciate the car fully. But, because so much work has gone into it, it would be missing half of the story not to run through the technical highlights.

Starting with the engine, Callaway drops a supercharger into the middle of the V8 that, along with an air intake system called the Callaway Honker, ups the horsepower from the standard car’s 430 bhp to a far more interesting 700 bhp that pushes the top speed to beyond 200 mph. It also has a warranty for 100,000 miles, so it should stay interesting for the lifetime of the car.

The suspension has been given a wide range of adjustability designed to cure the car of the standard Corvette’s sometimes poor ride quality and give better steering response. Taking the guesswork out of the thousands of permutations, Callaway provides what it calls “good starting point suggestions” for all types of use, from track to cross-country travel.

And the company hasn’t skimped on the brakes. Making sure the car can stop in the same dramatic fashion it goes are four carbon ceramic Callaway/StopTech discs that are unlikely to fade or wear out however often they are applied in anger. The firm knows a thing or two about using brakes hard (Callaway won the hotly contested 2007 FIA GT-3 race series), so it’s unlikely you’ll find a better, more positive setup than this.

The wheels are a composite of carbon fiber rims and super-light magnesium centers that together save around 10 pounds per wheel. That might not sound like much on a car that weighs more than 3,000 pounds, but it makes a huge difference in the way it stops, steers, and handles. Try running in a pair of heavy boots, then swap them for a pair of cross-trainers to get the idea. You won’t have to go far to notice the difference.

Even the tires are specially made for the C16 by Yokohama. But if all this technical detail fails to move you, the car’s design surely will. As slickly dramatic as the performance it’s been designed to clothe, the C16 Speedster retains the basic proportions of the Corvette, but offers a smoothly reductive design that has echoes of Zagato Aston Martins and even Pininfarina Ferraris.

Almost every body panel on the car is new to accommodate the new design language, but the most radically changed area is clearly the roof — or rather the lack of one. In its place are two humps that house two bespoke carbon fiber Formula One-style helmets that each cost $10,000. Callaway justifies the price by making them extraordinarily light — less than two pounds each — and by making them a necessity for traveling at any speed above walking pace.

The fly screens are a nice aesthetic touch, but they do little to deflect the wind over your head, particularly when the wind is being generated by the C16 charging forward on its apparently limitless supply of power. Up to 40 mph, there’s a fair degree of wind buffeting, and you can hear the high-pitched whine of the supercharger up front. But beyond that, the wind washes all the sound in the hand-tooled German leather cabin away.

Performance is predictably tongue-swallowingly quick to build and neck-snappingly fast to stop, and the build quality is excellent throughout. But it’s the looks that really set the C16 Speedster apart from all the Ferraris and Lamborghinis. So you can fall in love with its ability or lust after it for its looks alone; it doesn’t matter. The C16 Speedster isn’t just exclusive; it’s authentic too.