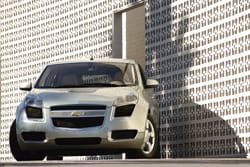 With so much hot air about eco-friendly cars, it feels like the chatter itself is contributing to global warming. As more “green” terms and buzz phrases slip into our daily lexicon, it becomes more difficult to work out exactly what’s going on and to sift the hype from the hard facts. Certainly, there’s progress all around us — but when, how, and why are the cars we drive going to change? And will we even notice when they do?

To help sort hybrids from hydrogen fuel cells, we’ve driven a few of the latest offerings and, frankly, were impressed. If this is the direction engines are heading in — and pretty much every carmaker agrees that, in one form or another, it is — we are in for some pleasant surprises.

Hybrids — made famous first by the almost ubiquitous Toyota Prius — represent the first and best-known technology, with its appeal broadening to include the Lexus 400h, the Toyota Camry, and the Ford Escape. But hybrids are a bit of a con. Yes, they can cut your fuel consumption to a point where it’s a genuine surprise to have to gas it up. And, yes, they cut tailpipe emissions to a point where the air is almost cleaner on the way out than on the way in.

However, hybrids contain two engines — one gas powered, one electrically operated — that create significantly more pollution than does one normal motor. And they carry a pollution time bomb in the form of the onboard battery pack used to power the electric motor. After 150,000 miles it must be replaced. What happens to the old one? I’ve heard no convincing arguments from the carmakers on how much can be reused and/or disposed of safely.

So enjoy the everyday cleanliness, frugality, and performance of your hybrid. But don’t boast too loudly yet; there are still some issues that need to be resolved before the cars earn an eco gold star. Plus, other companies are producing alternative-powered drivetrains that might prove simpler and better.

The Tesla Roadster certainly falls into the simpler category. I could massively oversimplify this car by calling it an electric-powered Lotus Elise — one of the prettiest and best-handling cars you can buy — but that would do a disservice. The Tesla does use a revised Lotus Elise chassis, and the bodywork was styled by the British company; but the electric engine is of Tesla’s own making.

Funded and run by Silicon Valley types who found success in broad-minded and often leftfield analyses of the Internet, Tesla is no petrolhead’s folly, a car built irrespective of cost only to satisfy the particular requirements of a fabulously wealthy CEO. No, it’s a completely new take on the whole alternative-fuel vehicle.

Rather than develop some extraordinary new technology such as fuel cells (see below), Tesla focuses on refining available rechargeable battery technology to a point at which it can provide sufficient power and range to satisfy the average motorist’s needs. It’s doing quite well, in fact. The $92,000 Tesla Roadster has a range of 260 miles and can be fully recharged in a few hours.

While you can order a Roadster today — more than 400 people already have, though they won’t receive their cars for a year or more — the company is also working on a four-door sedan, which will be available by 2009 for about $70,000. That might sound like a high sticker price; but when you consider engine maintenance is almost zero for the entire life of the car and the performance equivalent of a gallon of gas costs only 1 cent, you can quickly justify the upfront cost.

Plus Tesla has performed environmentally with the battery packs in its cars. It claims that more than 80 percent of the spent battery parts (estimated to last for about 150,000 miles, like those in most hybrids) are recyclable — and that the remaining 20 percent is “landfill safe,” so your grandchildren’s gardens will not die for your motoring pleasure.

At the other end of the spectrum is GM’s Chevrolet Sequel, which is as complicated as the Tesla is simple. Built entirely by the auto giant using all of its own technology and resources, the Sequel uses an onboard hydrogen-powered fuel cell. It has to be filled up at a special hydrogen filling station (there is only one in Palm Springs). But once the tank is full, you are away.

The fuel cell converts the hydrogen into electricity, which powers separate electric engines in each wheel, leaving you with loads of go and not an environmental care in the world. For the Sequel, which its maker has said could be produced today if there was demand, can do 0 to 60mph in 10 seconds, cover 300 miles between top-ups while producing nothing other than water and, maybe appropriately, a lot of hot air.

Andrew Yeadon
Built entirely with GM technology and ingenuity, the Chevrolet Sequel uses an onboard hydrogen-powered fuel cell, which requires a special filling station (there’s only on in Palm Springs).