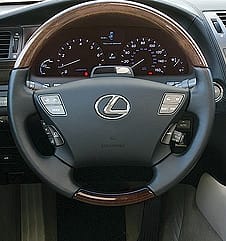 Answering questions no one has asked has become a specialty of the auto industry. Questions such as, “Do I want my car to tell me if I’m wandering out of my lane of traffic?” and, “Do I want my car to stop me from falling asleep at the wheel?” These are only a couple of the bizarre queries we have recently been asked to consider.

These lifestyle interrogations are not asked directly; they are implied by “answers” being fitted in the cars we drive. It doesn’t matter whether you think either of these systems is necessary — or even desirable.

Toyota, among many others, does. That’s why it has given us the new Lexus LS 600h L, equipped with both of the above safety features and many more. It is the most complicated production car on the road today. It’s also the largest hybrid car you can buy.

The 600h is fitted with more in-flight systems than two private jets and has a drivetrain that would make any other you’ve seen look like a blender. You get the feeling Toyota created this technical tour de force to demonstrate its deft ability to solve problems that most of us never knew existed.

Not content with having a five-liter gasoline engine — a slightly enlarged version of the unit used to power the lesser LS 460 sibling — the 600h also has two electric engines and a battery pack. This gives the hybrid car the ability to run on electricity, gas, or both depending on the road conditions — and how late you are for your destination.

That’s a couple more miles per gallon than the nonhybrid LS 460 in town, but several fewer on the highway, as the heavier, all-wheel drive 600 uses more energy. Where it really scores is in the clean air department.

The manufacturer claims the 600h produces up to 70 percent less pollution than the competition, which you have to presume means Mercedes-Benz S-Class, Audi A8L, and BMW 7 Series.

That’s despite being at least 800 pounds heavier — the equivalent of four large adults — than the non-hybridized LS460 L.

Guiding all this power to all four wheels is nothing as ordinary as a gearbox. No, the 600h uses a three-mode, constantly variable transmission that does away with anything as old-fashioned as gears. This allows the brace of engines to run at the most efficient speed and to ensure the power delivery is more like that of a turbine than anything with pistons flailing up and down.

It also plays its part in creating an interior more tranquil than a village pond. Climb into the 600h and shut the door and the world gets shut out almost completely. It’s like going temporarily deaf.

A reminder that you haven’t comes in the 19-speaker sound system that offers so much clarity and detail, you can almost hear the couple in the eighth row at concert whispering to each other about where to go for dinner.

But then you’d expect nothing less in a car hoping to redefine the luxury car segment.

Where the 600h really ups the game is elsewhere in electronics. A camera mounted on the steering column stares, without blinking, at the driver. If the car senses via its radar that there’s something ahead in the road and that the driver is not looking in the right direction to see it, it sounds an alarm and applies the brakes.

Then there’s the onboard data system. This not only allows you to rip all your CDs to a hard drive in the car, but also has a fully interactive navigation system that monitors traffic conditions on your route and offers alternatives on the fly.

But the most extraordinary of all has to be the automatic parallel parking system. You pick the spot, take you hands off the wheel and the car becomes possessed by the parking gods before doing all the necessary twirling to squeeze the car into the space.

It’s all completely unnecessary, but you can’t help being mildly impressed.

The performance is similarly refined. It can reach 60 mph from rest in six seconds and run onto deeply illegal speeds, but not in such a way that you’d notice.

The emphasis for the whole car is on sumptuous comfort rather than having sporting overtones like the German bahnstormers. So the ride is soft and supple rather than firm and controlled. This is a car to waft and cruise, not throw around.

And as you glide along in your hermetically sealed hybrid spacecraft, you’ll have little distraction from your thoughts.

This should give you plenty of time to consider if 2,000 people in the United States will spend more than $100,000 to own the biggest Lexus — the company’s sales target for the year.

That’s one question not even the LS600h L can’t answer — yet.

Honda has unveiled the world’s first fuel cell-powered production car: the FCX Clarity. It runs exclusively on hydrogen, emits no pollution, and is packed with futuristic technology. And, as only 100 or so will be available, demand is sky-high.

The Clarity sets a new standard for zero-emission cars. While most battery-powered efforts require the user to charge them for hours and suffer humiliating performance levels, the Clarity is as quick and smooth as it is clean.

Burning hydrogen to create electricity to power the car, the Clarity requires no special treatment other than being filled with the special gas. You turn the key, press the start button, and whoosh onto a silent wave of torque all the way to its top speed of 100 mph.

Each tank of hydrogen lasts about 270 miles. And it qualifies for the yellow sticker that allows it in the HOV lane even when the driver rides solo.

The actual cost of each Clarity is somewhere around $1 million, but Honda will offer them for only $600 a month on a three-year lease.

To get one, you must visit www.fcx.honda.com and provide certain details. If they match Honda’s strict lifestyle requirements, you might receive a call inviting you to try one. One of the main requirements for Clarity stewardship is being close to a hydrogen filling station. Because Palm Springs is one of the few places in California with one of those, it could swing the vote for you.

But be quick. Only five days after the car was shown in Los Angeles, the Clarity Web site crashed under the torrent of people trying to access it.

Is it worth the fuss? Having driven it, I’d say it is.