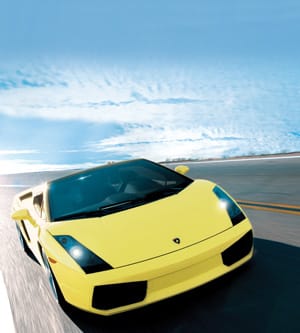 Not long ago, driving a Lamborghini was like sitting in the front car of a runaway rollercoaster. While you were notionally in no danger as long as you hung on and waited for it to stop, it always felt like something of a relief when you managed to climb out of the car with no damage done to life or bodywork.

It’s not that they handled badly or were unreliable, but rather that they embodied an evil spirit that would manifest itself unexpectedly at some point in the drive. A loose electrical connection here, a vast blind spot there made them a challenge to drive pretty much anywhere — a fact even Lamborghini itself (perhaps unintentionally) recognized when it marketed a model aptly called the Diablo.

Not anymore. In 1998, Volkswagen bought Lamborghini and rolled it into the Audi Group, there to be revitalized for the 21st century. The results have been stunning. Out have gone all the unreliability and poor build quality issues, and in have come some of the most polished, passionate supercars the world has ever seen.

The Murciélago turned the Diablo from beast to beauty and hasn’t stopped getting better every year that it has been in production. Then came the smaller Gallardo that snapped so many necks with its radical looks that it deserved a special prize from the Chiropractors Association.

Late last year, Lamborghini unveiled what is probably the last iteration of the big, V12-engined Murciélago: the LP640 Roadster. As dramatically different as always, the Roadster is as gloriously impractical as any car ever made. It does have a roof of sorts, but it’s so small you’d be better off putting up your umbrella if you got caught in a rain shower. It’s not a car you can compare with many others. It’s more a land-based alternative to a private jet or luxury yacht.

But as spectacular as the LP640 is, it far from overshadows its little brother, the Gallardo Spyder. This is the all-new, open-topped Lamborghini built from the ground up using all of Audi’s immense knowledge of producing some of the finest quality cars in the world. Unlike the LP640 Roadster, which is effectively a chopped and changed version of the Diablo, the Gallardo Spyder started from a clean sheet of paper. And it shows from the moment you get close to the car.

Quite apart from the blindingly gorgeous range of colors available to announce your arrival, the Gallardo reeks of quality at all touch points. The passenger compartment is perhaps the most obvious place to see this. The fit and finish of all the dash and doors is comparable to — and in some cases perhaps better than — what you find in most other convertible sportscars. When you pay more than $200,000 for a two-seater, you want to see where the money has been spent; and in the Gallardo Spyder, that’s more than clear.
A majority of the controls are borrowed from Audi’s upscale models. Audi makes some of the best car controls in the world. So you get low-run exclusivity with volume-produced efficiency and quality. Likewise, all of the German company’s knowledge of convertible roof design has been brought to bear here.

No nasty, fiddly press-studs or levers are anywhere to be seen. You hit the roof button and 20 seconds later it’s either been tucked away or clamped back into position, according to your wishes. Another nice touch is the rear window, which can be dropped or raised with the roof in place.

So, it’s made well. But does the Gallardo Spyder perform as good as it looks? The short answer is yes. Because the open-top was designed as part of the overall Gallardo project, the car suffers none of the flexibility found in many other convertibles. This translates into laser-sharp steering and handling with the roof up or down, irrespective of the road surface — a good thing because, with 512 bhp on tap from the V10 engine, you need to stay alert at all times. You can whip it up to the legal limit in a handful of seconds — and on to nearly 200 mph if you are really in a hurry.

You can be sure that everyone in your county will know if you are maxing out your Gallardo, as it makes one of the most recognizably potent sounds this side of an unsilenced Formula 1 car. Lamborghinis aren’t supposed to be subtle or reserved, and the Gallardo’s ferocious snort adheres completely to this philosophy. It’s fun the first few times it unleashes its voice, but could become a bit wearing if you were driving any great distance. The fine audio system does its best to drown out as much as it can, but the distinctive V10 beat still accompanies every track.

If noise is an issue, the Gallardo Spyder may not be the car for you. The baby bull has been designed and created to stir profoundly every single one of the senses, and it does so with Italian pride and German efficiency. No other car is quite like a Lamborghini; and once you’ve driven one, you’ll see why. That’s now true for a large number of right reasons instead of a few that were — often terrifyingly — wrong.