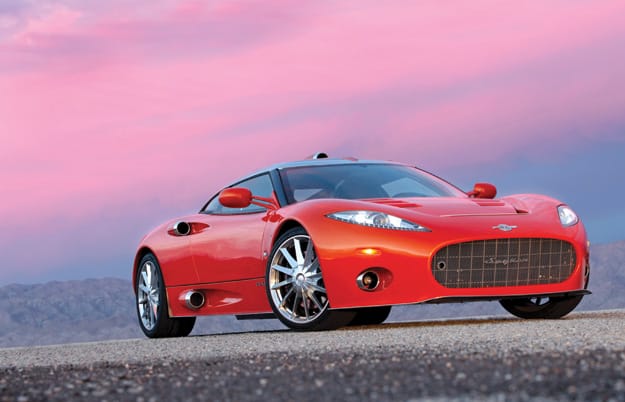 It might look like it has just driven out of someone’s vivid fantasy, but the Spyker Aileron C8 Coupe has a heritage that stretches back almost to the 19th century. It’s more like the forgotten grandfather than a new kid on the block — older than Ferrari and Lamborghini combined.

I don’t want to get too bogged down in the Dutch brand’s early history. Despite selling fewer than 50 cars worldwide last year, it’s making modern history taking over Saab from GM and launching this Aileron C8 Coupe. Only time will tell if Spyker management can make sense of the ailing Scandinavian car company. But we can find out right now if the C8 Aileron is a success or a failure.

On first impression, it appears and feels like Spyker understands what today’s supercar buyer seeks. The aggressive, hunkered-down styling has an air of Aston Martin around the front, Ferrari Dino at the rear, and a submarine in the middle — thanks to the periscope-style air intake. It’s a mix that grabs and hangs onto your attention. So it passes the first test: visual appeal.

It also passes in the performance department. Powered by the same 4.2-liter Audi unit as the A8 sedan and R8 supercar, the C8 has more than enough power to cash the checks that its racy looks write. It’s not stellar fast in the mode of one of the Italian supercars, preferring a slightly gentler delivery as befits its GT status. But it could never be described as slow. Spyker claims the C8 has a top speed of 187 mph and a 0-62 mph time of 4.5 seconds.

Part of the reason for these heady performance figures is that the C8 is made entirely of aluminum in the United Kingdom by Coventry-based CPP. It’s light enough not to disappoint once you dig a little deeper into its performance. Beneath those bespoke panels lies a featherweight chassis that has been designed and developed by the genii at Lotus Engineering. It’s 6 inches longer, 5 inches wider, and has a rear track 2.5 inches wider than the outgoing Spyker models — which explains why the Aileron looks so much sleeker and happier on the road.

The other reason the C8 provides such a better driving experience is that it shares its suspension components with the fluidly capable Lotus Evora. This translates into ride and handling that are a light year better than any previous Spyker. An air of relative suppleness and calm replaces the often jarring and sudden character of previous models. It’s less punk rock, more Frank Sinatra.

But that’s where the restraint ends. Remotely flip up the driver’s door using the circular key fob as you walk toward the car and you reveal the C8’s stunning, jewel box-like quilted leather interior. It looks like a cross between a vintage airplane (it’s no coincidence; Spyker used to be in the aviation business) and a classic racecar from the ’60s. Instead of all the neat swathes of plastic switches that fill the center consoles of most modern cars, the C8 has a row of fabulous mechanical, metal toggle switches jutting from the dash that are as satisfying to use as they are to see. On top of these is a row of dials that have clearly been designed as much for decoration as information. And then there’s the machined-aluminum panels in which they sit. It’s all quite extraordinary and goes a long way to justifying the C8’s price.

However, it’s the drive that seals it. Flick open the red-shrouded switch to fire up the electronics, push the starter button, and away you go. There is no bestial roar from the midmounted engine behind your head, only a calm and authoritative thrum as you flick the car into first using the beautiful, chrome gear lever and swoop away. The moment of truth, when you know you could live with the car, comes when you reach for second gear.

Rather than perfectly time a manual change (always difficult in the previous-generation cars), the C8 is the first Spyker fitted with a six-speed automatic box. You flick the gear lever or use the steering wheel paddles and get a perfect change every time. A manual box is still available for true enthusiasts, but automatic is best for everyone else.

Once on the move, the Aileron’s light and airy cabin, precise controls, and supple suspension make it an easy car to drive. It’s not quite in the Porsche 911 category of simplicity yet, but then few regular sedans are either. Speed is easy to add and subtract, corners fly by in a blur as the cultured V8 purrs away, and all feels well with the world -— particularly as the C8 is not as expensive as you might imagine.

With craftsmanship that’s hardly bettered by a Bugatti and performance almost on a par with a Porsche, you might expect that the tag could run to seven figures. But that’s not the case. The C8 Aileron starts at $219,190. Like I say, the jury’s still out on the Saab deal; but if it carries on making cars like this at prices like that, Spyker has a good chance of succeeding in at least one of its businesses for a couple more generations.