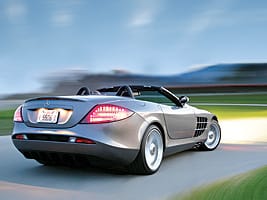 The McLaren Mercedes SLR is the last version of the fabled supercar, and in many ways it’s also the best. Eye-blink quick like its hardtop coupe brother, this model — with its semi-automatic convertible roof — allows you to blow dry your hair at near supersonic speeds (0 to 60 mph in 3.6 seconds).

As you might expect on a piece of car confectionery like the SLR, the roof is a long way from being simple: The front section is made of aluminum to prevent it from blowing away like an umbrella in a storm. The rear is made from a newly developed fabric — available in three colors — that minimizes its storage space and weight.

The roof releases manually from the front with a twist of a D-handle, and then you press a button for the electric motors to take over and fold it behind the seats in fewer than 10 seconds. The aluminum front neatly forms the lid. The SL-style folding metal roof — still the best design of its type — would have been absurdly difficult to incorporate into the SLR because of its heavier and more complex carbon-fiber body shell.

Even at high speed with the roof down, unlike with most cropped-top motors, “conversation is still possible at well over 124 mph on open-air journeys thanks to the favourable aeroacoustics,” Mercedes claims.

In practice, the SLR really is remarkably calm in the cabin at all normal road speeds. There’s a whip of wind across the top of your head, but very little buffeting and none of the boom you can get in other open-topped supercars. So if you experience problems hearing your passenger, you either need to check your hearing or watch for flashing lights in your rearview mirror.

While the new roof system adds a fresh level of interaction with the passing view, the SLR Roadster’s handling also feels tighter and more controlled than the coupe’s. That’s surprising, as most roofless versions of coupes have distinct handling deficiencies because of the loss in rigidity with the lack of the cabin ceiling.

The reason for this is the Roadster’s pure carbon-fiber monocoque chassis, which has been strategically redesigned and re-inforced to cope without a roof. McLaren knows a thing or two about building super-fast, open-topped cars, as its Formula 1 team demonstrates regularly.

Concerns that McLaren would drop the gull-wing door design of the coupe were unfounded. The Roadster keeps the fantastic — and surprisingly practical — flip-up doors, but with thicker, steel-reinforced A-pillars to make them fit.

In addition to stronger pillars, the car has two rollover bars and enough airbags and technology to protect you from almost anything.

The standard equipment list is longer than a spoiled child’s wish list. It starts with leather-upholstered, carbon-fiber bucket seats, which can be fitted to both the driver and passenger sides in either small, medium, or vast, then finishes with the usual avalanche of in-car electronics that allow you to tailor the sound, heat, and direction of the car to your desired setting.

What it doesn’t do is allow you to adjust the price any direction other than upward. The car costs $495,000 before you add any taxes or extras. But you could make this case to your banker for buying one: As the last of the breed, it’s bound to appreciate.

If your banker disagrees, buy one anyway and travel faster than 125 mph.You can always say, with Mercedes’ blessing, that you never heard his call.