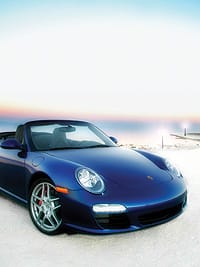 Not even a presidential election divides opinion like the Porsche 911. On one side are die-hard fans who relish the car’s gradual and studied constitutional evolution; on the other are modernists who can’t understand why Porsche continues to refine something that, to them, was right in the first place.

The 2009 edition will not significantly shift either side’s position, but swing voters might be tempted to have a look. More fuel efficient than ever — drive a regular sedan hard and you will get lower mileage than in this supercar — the 911 is also easier and more fun to drive.

The mostly new engine, which remains several feet too far back for some people, now has a direct-injection design and offers greater economy and power because of less internal friction and more free-flowing air filters and exhaust. Power increased from 20 bhp to 345 bhp on the Carrera and up 30 bhp to 385 bhp on the Carrera S.

The useful changes pale in comparison to the new seven-speed automated manual transmission. A huge leap forward compared to the outgoing Tiptronic automatic gearbox, the new system — called PDK — is lighter, faster, and altogether better. Where the five-speed Tiptronic slightly blunts the performance of the car, PDK improves it.

Leave the gearbox in automatic mode and PDK will change gears faster and more accurately than you can, demonstrated by the PDK-equipped car’s faster 0-60 mph time compared with its six-speed manual brother. When you reach cruising speed, seventh gear is so much longer than the outgoing model’s top gear, and it reduces noise and consumption to a minimum.

The system monitors and learns your driving style and then swaps gears in what it thinks is appropriate for you. If you disagree with it, you have two ways to intervene.

First is via two steering wheel-mounted push/pull sliders. They work in the same way — push to shift, pull to downshift — so the wheel position does not matter; you should always be little more than a finger flex from one or the other silver button. Some people have criticized the switches as not being intuitive enough, but they work a lot better than some other systems I’ve tried.

He second way to manually swap gears is to yank the gear lever to the left and use it as a sequential shifter, race-car style. It uses the same shift logic as the buttons — back for down, forward for up — so it’s easy to learn and mix their use. It doesn’t allow you to block shift,  jumping from fourth to second when entering a tight curve, say, but the change is so fast that you need only an extra flick to sort that out.

Joining the new drive train are a number of details that ratchet up the driving-and-beholding pleasure. Outside there are new front and rear LED lights, plus the nose of the car has a subtly different profile. Inside, simplification of the center instrument console prevails, the best bit being that the navigation uses touch-screen technology (which should be the default for all such systems) rather than the fiddly dial to input a new destination.

The only other changes to the new model are the ones you want to make yourself. With an options list a mile long, the potential for self-expression is virtually limitless. You can tailor this car down to a level that might cause even a Rolls-Royce or Maybach driver to raise an eyebrow. Want to cover the air vents in leather that matches your shoe color? You got it. How about a similarly color-coded leather-wrapped coat hangar for the back of your seat? But would that be one or two?

I was surprised how much I enjoyed driving the new 911. It’s too easy to sink into preconceptions with a car that outwardly changes so little. How can it be so different from the last one? You’ve driven one, you’ve driven them all, right?

Wrong. Sure the 2009 might look familiar, but it’s appreciably better in almost every way than the one it replaces. It gets my vote; and once you get behind the wheel, I’m sure it will campaign hard to get yours, too.