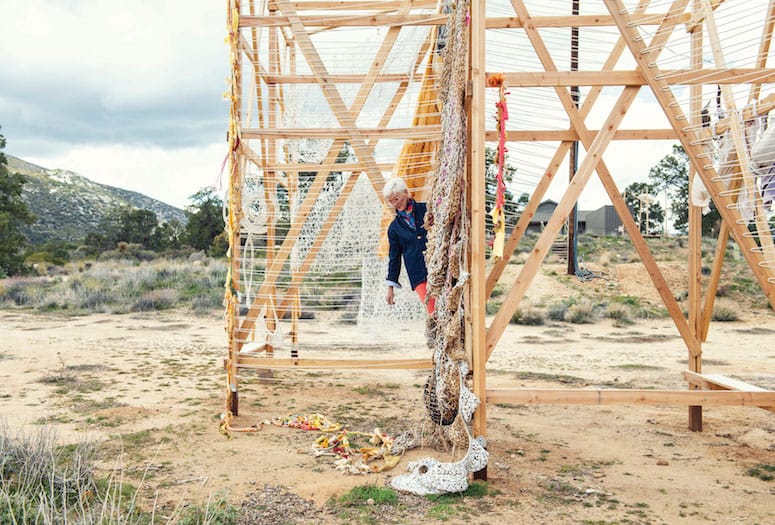 The Coachella Valley boasts a long history of strong, visionary women leaders. Nellie Coffman, for example, was instrumental in Palm Springs’ growth, founding the Desert Inn in 1908. Pearl McCallum McManus left indelible marks on the real estate scene. The work of artist Agnes Pelton has not only stood the test of time but is the subject of an upcoming exhibition at Palm Springs Art Museum.

Each year, Palm Springs Life recognizes the trailblazers of today — the Coachella Valley women who stand out for their creativity, innovation, and leadership, as well as for their role as mentors to younger generations.

Kristi Hanson decided in seventh grade that she wanted to be an architect. “I’m not sure I understood what an architect did,” she says, “but when I saw the outside of a building, I wanted to know how the inside worked. That’s what drew me toward it.”

She was one of only five women accepted into the 60-member architecture program at her home-state North Dakota State University. “It was predominantly a male-dominated field,” she says. “My mom tried to talk me out of it. I had a school counselor try to talk me out of it, who said, ‘This is going to be hard. It’s geared more toward men.’ I didn’t care.”

With a degree under her belt and an intent to leave the cold weather, she set out to find a job somewhere warm. “There was a book in the library that listed all the architecture firms in the country, and I sent letters to architects who lived in warm places. Interactive Design in Palm Springs sent me a letter and said when I was in California, I should stop by for an interview.” 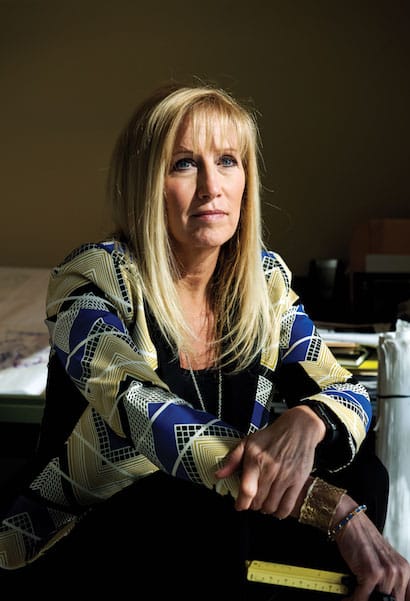 Instead, after a phone interview and a review of her portfolio, she was hired from afar.

A few years and jobs later, including working in architecture review at Bighorn Golf Club in Palm Desert, Hanson found herself moving into a leadership role, hiring other architects and overseeing construction projects.

“People started calling me, saying, ‘Can you do this? Can you do that?’ ” she recalls. So she launched her own firm, KHA Architects, in the late ’90s.

“As a woman, I think you have to always prove yourself more than the guys do,” she continues. “You have to think things through better because you’re going to get questioned on everything. One of my favorite stories is from when I first was working on my own. I went out to a job site to look around. The contractors were there and said, ‘Isn’t it a little early for the interior designer?’ Rather than be mad, I just said, ‘You know what? It really is. I wonder where he is.’ So, I learned how to not take it personally and just persevere.”

With the addition of her youngest sister, Jen — who takes care of the firm’s interior design — and a few more employees at her dog-friendly office, she was off. But ever community-minded, she continues to create a sense of connection between her past and future, recruiting graduates from her alma mater.

That mindset extends to mentoring others at the school, where she sits on an advisory board for the architecture department to help instill philanthropy into students so they’ll pay it forward. Locally, Hanson works with rescue missions on backpack, toy, and food drives.

Just as she is dedicated to giving back to our community, Hanson always approaches projects with her clients’ goals in mind. “We’re in the business of architecture,” she says, “but so much of what we do is trying to make other people’s dreams a reality.”

“One thing led to another” seems a common refrain in Debra Hovel’s story. Her success in one arena invariably futhers her endless thirst for knowledge, which in turn motivates her next venture.

Hovel wears many hats: She designs custom footwear, and with her sculptor husband, Richard, she co-owns The Desert Star rental property in Palm Springs, co-founded Makerville and the Palm Springs Center for Creativity, and organizes 2020 ND2KNW, a conference of thought leaders.

Inspired by the Library of Congress StoryCorps project, she and Richard are also documenting stories of local residents in conjunction with the Palm Springs Historical Society.

“We’re not joiners,” she says. “I want to make things happen.” When the couple relocated to Palm Springs from Minneapolis in 2010, they “decided not to serve on any boards. As a result, we’re free range. We can go everywhere and look at everything. That’s how we decided to run our lives here. If we see it’s missing, we do it. We decided we want to do more art, be more creative, and be very involved in giving back to our community.”

After hosting the monthly Salon for the Parched with designer Kurt Cyr, the Hovels created Makerville, a creative space in a former Elks summer camping lodge in Pinyon Pines, about 20 minutes from Palm Desert. 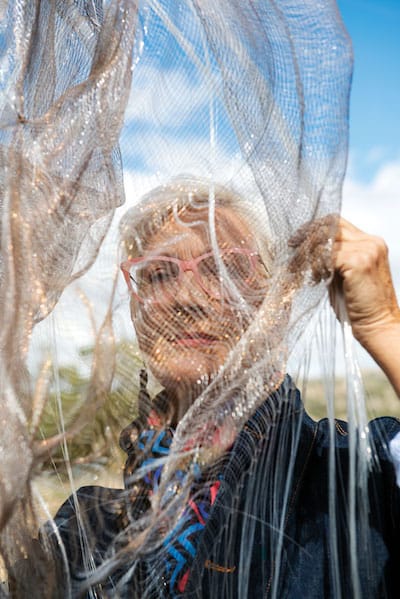 “We decided we want to do more art, be more creative, and be very involved in giving back to our community.”

“One winter, we happened across a woman named Carol Sauvion, who started Craft in America, the TV series. And we started to think about artist communities. The maker movement is what’s driving us now. It’s about humans’ need to directly affect things around them in an authentic way,” she explains. “We live in a small town, and we like to know the names of the people in the stores. Wherever we go, it’s human-scaled and makes us feel at home and happy. We don’t crave anonymity. We crave feeling at home in our environment and feeling like it’s in perfect scale to the way we want to live our lives.”

While participating as a Desert X Parallel Project, Makerville also created Mod With a Twist fundraising events at Modernism Week. That sparked the virtual nonprofit Palm Springs Center for Creativity “to make our community a better place by enabling us to deal with the future by means of education and the arts and futurism,” including the legacy audio and video project.

Next is ND2KNW in February 2020. The Hovels, who attend TED and World Future Society events, want to bring thought exploration to the Coachella Valley.  “We want Palm Springs to be a vital, creative city, attract a creative workforce, and expand the community in such a way that it becomes an even more cosmopolitan city.” 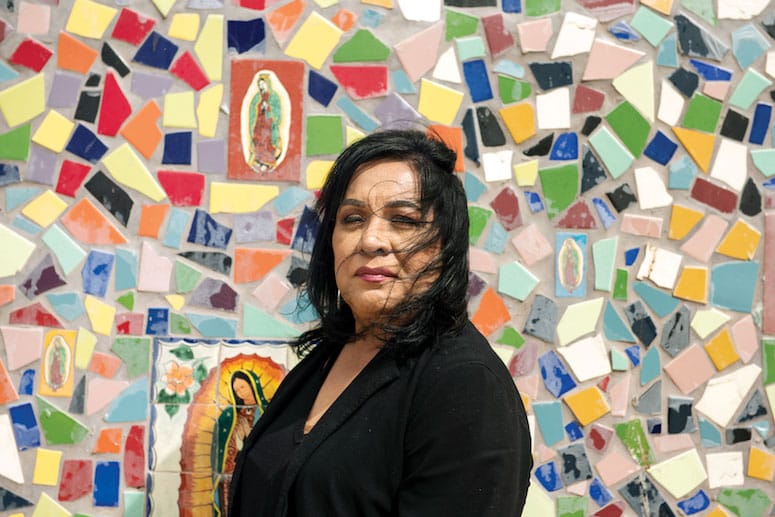 It began with a mural. Back in 2007, Oralia “Yaya” Ortiz and six friends began a conversation about the lack of public art and places for youth to gather in Coachella. They pitched a plan to the city to add a mural created by local artists, kicking off the project in 2009 with a festival at the adjacent Dateland Park.

“Each artist created a mural panel that depicted Chicano and Mexican culture,” Ortiz says, “and these artists had never painted a mural.” Thus, Culturas Music & Arts was born, and Ortiz has since been nurturing its growth. Her goal is to connect Coachella with the rest of the valley: “I want people to see ours as a community with a lot of culture and hardworking people,” she says. “We’re trying to change its image through the arts.”

Ortiz, who works full time at Shelter From the Storm, also helped create the Synergy Music and Arts Festival to promote underground, graffiti, and hip-hop artists.

“We wanted other nonprofits and all of the communities to come together, bridge gaps, and show everyone around the Coachella Valley who we really are,” she explains. “This is our eighth year, and it’s growing. We want to give back, we want to invite other artists, and we want exposure. We also want children to be part of it.”

Culturas’ team of 10 makes its headquarters at Ruben’s Ranch, owned by Ortiz’s partner and one of the nonprofit’s co-founders, Ruben Gonzalez. “We’re a small group, but we’re a strong group. The people in our organization are passionate and very caring,” she says. “We’re open to everyone’s ideas.”

Ortiz grew up in Coachella and dedicates herself to making a difference there. (Coachella’s Centro Martin Ortiz is named for her father, a community activist who saved the former church from demolishment.)

“I’m not an artist per se, but I believe music and art are essential in everyone’s life,” she explains. “Everyone should give back to the community, and anyone can.”

Her next goal is to build a cultural arts center for at-risk youth, modeled on Father Greg Boyle’s Homeboy Industries in Los Angeles, which offers career training for former incarcerees. “These kids don’t have a voice and don’t have any kind of support at home,” she says. “We want to teach them to create, sell, and make money. Nobody’s addressing those needs in that population.

“We want to run our program like [Boyle’s] but with art, media, storytelling, drama, and theater. As much as we want all of our kids to go to college, not everyone’s going to go. So we want to give them those skills.”

• READ NEXT: What else is happening in Palm Springs and the desert.