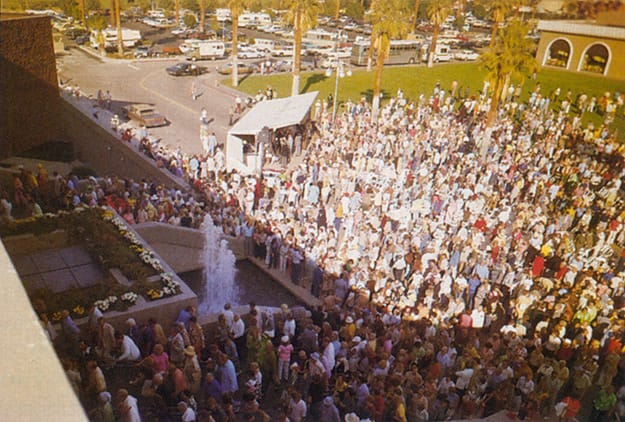 In 1916, Palm Springs was a village of about 70 residents, half of them Cahuilla Indians. Seasonal visitors, most of them seeking health improvement, doubled the winter population. The first permanent Desert County Highway, connecting Palm springs with Manning and Riverside, had just been constructed (On the evening following the dedication ceremonies, heavy rains undermined the macadam surface, and two weeks after construction, the highway was once again a dirt road.)

That same year Edmund C. Jaeger came to Palm Springs. A naturalist at heart, Jaeger started the wave that would eventually end in the Palm springs Desert Museum.

A teacher for Palm Springs’ only school. Jaeger found main eager students among the town’s adults as well. A group of desert enthusiasts formed "The Nature Club," the first organized attempt to share knowledge of the desert environment.

Jaeger and his group met at the home of Pearl McCallum McManus, the daughter of the first developer and promoter of Palm Springs. The Nature Club foundered however, when Jaeger left the following year to teach in Riverside.

It was 16 years later that Theodore Zschokke, another naturalist, organized the second attempt to educate the public about the Palm Springs environment. In the spring of 1934, Zschokke had laid out a nature trail, patterned after one he had seen in New York It started within the exotic cactus and palm nursery maintained by the owners of the town’s only blacksmith shop, the Desert Forge. The trail meandered through the nursery itself and continued for a third of a mile up Tahquitz Canyon. Zschokke hoped the trail would attract devoted desert enthusiasts who could help him build a permanent natural history museum.

Unfortunately, few visitors spent much time on the trail. The Depression was on and life was hard. Visitor contributions were not meeting Zschokke’s expenses. Still, he kept the trail open one more season and even added a trail-side zoo and museum, including caged reptiles, rodents, insects and an exhibit of local cacti. But after two seasons, Zschokke’s health and enthusiasm were failing. He eventually moved to Idyllwild, and Don Admiral, once a student of Zschokke’s, continued the quest for a Desert Museum.

Building on the foundation laid by his predecessors and using his skills as a promoter and developer, Admiral opened the first “real” museum. Palm Springs Desert Museum opened in La Plaza on Palm Canyon Drive in January of 1938, and quickly became a popular spot for brow sing and chatting. Open Monday through Friday, it featured lectures by Admiral and weekly excursions into the desert, dubbed "Admiral’s Auto Caravan Field Trips." By March, people were being turned away from lectures and the field trips, even at the then high admission of $1 per adult. At a time when lunch cost 75¢ and a good seafood dinner $1.25, a desert field trip was a luxury.

Only 10 percent of the museum’s visitors were local residents, and more than half were from east of the Mississippi. Palm Springs and its museum were now genuine tourist attractions.

Town leaders were quick to recognize the significant contributions the museum could make to village life, and moved to ensure its permanence.  On October 13, 1938 the Palm Springs Desert Museum was officially incorporated.

Bolstered by Civic support, the museum opened its second season in December of 1938. The inaugural exhibit was an impressive collection of charred bones, buttons and beads from an Indian cremation pit on Tahquitz Creek.

By April of 1939, 4,400 persons had visited the museum. However, only nine months after incorporation, the museum had a grand total of $2.57 in its bank account, and was forced to close its doors. With its collection packed away or returned, the tiny museum appeared to be a short-lived dream. Palm Springs settled into the heat of summer 1940 with little expectation that the Desert Museum would be revived the following season.

In 1940, an open letter from the board of directors of the Desert Museum was published in The Desert Sun.

"Fellow residents! Shall Palm Springs have a Desert Museum?" At the time, it was certainly a fair question to ask. A wave of civic pride and community action had recently seen the city itself incorporated, a library district formed and dedication of a new high school.

"What is your reaction?" the letter asked. "We are ready to do our part. If there is sufficient interest and practical support, we can successfully go ahead. If this does not exist, we propose to disband."

The response to the letter was enthusiastic if not large. The directors set upon a membership drive. Before a mail campaign began, 42 villagers had joined the museum. Two weeks after the letters were mailed; the museum roster contained 101 names.

From that critical moment of decision until the present, there have been many triumphs and setbacks in the museum’s growth and development. Unable to afford the construction costs of a new building, the museum leased the brand-new eastern wing of the Welwood Memorial Library. (The Welwood had recently built the wing for a children’s library, but could not afford to finish the interior.)

Throughout World War II, the museum became a desert information center for the many servicemen and their wives who were stationed in town. Attendance soared to 13,300 during the ’42-’43 season and 17,000 for the ’43-’44 season.

With the end of the war, the museum sought to expand its role in a community that would soon be caught up in the feverish post-war growth sweeping the nation.

In 1946, the Community Chest added the museum to its rolls. With the Community Chest paying operating expenses, fund-raising efforts focused on a drive for a permanent building. The Welwood Library was ready to expand, and had given the museum a year to vacate. In April of 1947, Miss Cornelia B. White, a local pioneer, deeded her Tahquitz Drive estate to the museum for its new site.

By now, the museum was an established part of community life. During the ’46-’47 season, 42,000 visited the exhibits. It was moving beyond the confines of local desert subjects to fill the wider educational and cultural needs of the general public. Over the next four years, the museum showed film classics and art history films from the Museum of Modern Art and the Allied Art Series.

Construction on the first permanent building began in January of 1958 next to Miss Cornelia’s railroad-tie house. Fronting on Tahquitz Drive between Palm Canyon and Indian Avenue, the new building had nearly 10,000 square feet of usable space and opened December 5, 1958 with a reception for 1,000 donors and civic leaders. Twenty years after its incorporation the museum opened the doors to its first "permanent" home.

The board briefly considered seeking municipal aid to create a public-supported museum, but, as in the past, chose to remain independent. In 1959 it initiated non-member admission fees: 50¢ for adults, 25¢ for children.

Four years later, a second opening was held for major additions to the museum. The board had built a $280,000 auditorium, a second floor on the existing building, and refurbished Miss Cornelia’s railroad-tie house.

The 1962 expansion provided so much additional space that designer Janet Wullner began to use the upstairs gallery for art exhibits.

The performing arts slowly found their way onto the museum’s auditorium stage On April 21, 1963, Desert Museum held its first Sunday Afternoon Concert, featuring music students from Southern California colleges. The concert was free and attracted 200 listeners. Under the continuing guidance of Mimi Rudulph, Sunday Afternoon Concerts continue to provide the community with quality entertainment each season.

In 1963, Edward Currier, a Los Angeles retailer with a great love for the arts, joined the board. Currier pushed for a greater emphasis on arts and through him, the Palm Springs Art Association (later the Civic Art Association) became affiliated with the museum.

By 1963, Palm Springs was no longer a small village; its permanent population was now approximately 17,000. The last 10 years of growth had brought the museum’s visitor count to an annual 80,000 and its monetary worth to nearly $1 million.

The decision to enlarge the museum’s focus to include the arts caused strain among the old guard, but was eventually accepted as inevitable. In theory, the board authorized a balance between the arts and natural science; in practice, public gifts endowed the arts much more substantially.

In 1970, Walter N. Marks, a pioneer Beverly Hills realtor and developer, was elected to the board. Excited about expanding Desert Museum, Marks convinced Home Savings and Loan to donate five acres west of the Desert Inn property on Palm Canyon. Plans went out for a 75,000-square-foot facility, three times the size of the existing building.

On January 24, 1976, 101 Museum Drive opened to the public. A crowd of 4,000 flooded the new galleries and thrilled at the expanse of the new building. The ribbon cutting ceremony topped two days of national bicentennial celebrations, and dedication events continued for the next nine days and nights, honoring all segments of the community. Palm Springs residents and visitors came in great numbers to celebrate their magnificent new museum.

Only four years after the dedication ceremonies. Walter Marks was once again out raising money, this time for expansion. The board of trustees wanted to expand gallery-space to include an American Western Art Wing. Plans were to grow into the existing administration offices. The museum entered another ambitious period in its growth and programming, with ground breaking for a new administration building in February 1981.

Today, the fully accredited Palm Springs Desert Museum is an important part of the worldwide perception of Palm Springs as a place where the quality of life is unparalleled, a place where the desert flowers and blooms. It continues to be a place of discovery, giving the gift of inspiration, and the wish to learn.