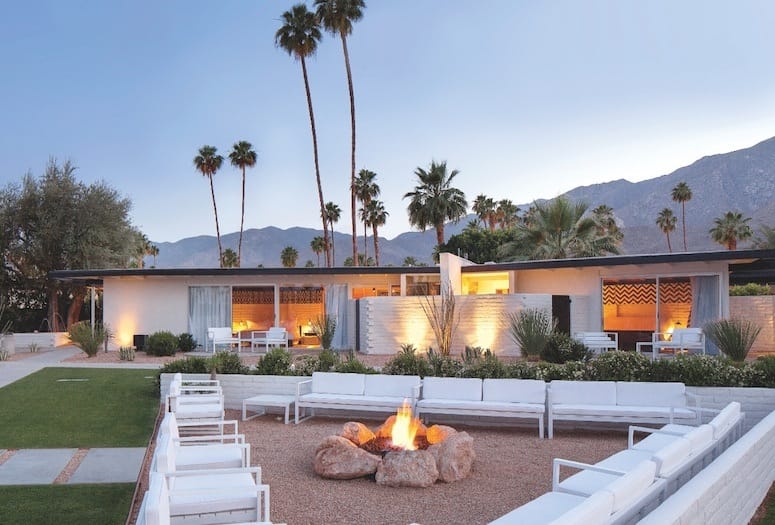 William F. Cody–designed L’Horizon started out in 1952 as a private retreat for television producer, oil tycoon, and hotelier Jack Wrather (Lassie; The Lone Ranger) and his wife, Bonita Granville. Wrather had a main residence and 20 guesthouses built for friends such as Marilyn Monroe, Ronald Reagan, and Richard Nixon. With its low-slung rooflines, the resort is considered one of the finest examples of Cody’s work. The bungalows feature open beam ceilings, adobe slumpstone, and walls of glass that offer views of the mountains and gardens surrounding the property. Coolness factor: The hotel’s open-air restaurant, SO.PA, is helmed by Michelin-starred Chef Giacomo Pettinari. Architect John Lautner designed this four-studio compound in 1947 for Oscar-winning producer Lucien Hubbard (Wings), who used it as a desert getaway until the early 1950s. It sat unused until 2000, when it was renovated with kitchenettes and reopened as the Desert Hot Springs Motel. After nearly four years of restoration by new owners Tracy Beckmann and Ryan Trowbridge, the 600-square-foot trapezoid-shaped rooms with slanted roofs and skylights became the Hotel Lautner in 2011. Coolness factor: The tech-friendly rooms have large framed windows overlooking a cactus garden. The enclosed patios offer incredible views of the Coachella Valley and the San Jacinto and San Bernardino mountains.

Modernism boasts a fascination with Polynesian/Hawaiian lifestyles, food, and drinks. There are a couple of well-preserved examples in the Coachella Valley, and one of the best is the Caliente Tropics Hotel, site of several Tiki Caliente events over the years. While retaining the look of 1964, the hotel features contemporary amenities in the guest rooms and has plans to open a restaurant. Coolness factor: A concierge for pets gives suggestions for animal-friendly restaurants, attractions, groomers, and pet-sitters. photo courtesy of orbit in

Oribit In has nine rooms decorated by midcentury designers like Charles and Ray Eames.

Flash back to the 1950s at the Orbit In, as you lounge in the sun by the saltwater pool and take in the amazing views of the San Jacinto Mountains from the enclosed patio. The resort’s nine rooms are decorated with midcentury furnishings by notable designers such as Charles and Ray Eames, Eero Saarinen, and Isamu Noguchi. Coolness factor: Each room has its own personality, from the Rat Pack Palm Springs, where you can sleep with Frank and Dean watching over you, to the Atomic Paradise, where George Jetson would feel right at home.

Designed by William F. Cody, the 17-room Del Marcos Hotel won the Creative Design Award from the American Institute of Architects’ Southern California chapter for its cutting-edge architecture shortly after its opening in 1947. Cody used native stone and redwood, along with features that include an asymmetrical entranceway and floor-to-ceiling glass walls. The U-shaped building surrounds the pool of this pet-friendly hotel, located in the historic Tennis Club neighborhood. Coolness factor: All the furniture, artworks, and lamps are original to the property. photo courtesy of the hideaway

You can see original shots of The Hideaway by famed photographer Julius Shulman at the hotel.

The elegant, romantic sister property of the Orbit In, is a retreat from the rush of everyday life. Built in 1947, the Hideaway was immortalized by famed architectural photographer Julius Shulman in 1948. Several original shots hang on the walls of its Town and Desert Lounge. Rooms are filled with era furnishings by Harry Bertoia, Pierre Paulin, and Marcel Breuer. Coolness factor: There’s the Boomerang Bar for the Orbitini Social Hour; a supply of bikes to cruise the neighborhood; and a well-stocked movie and book library in the lounge.