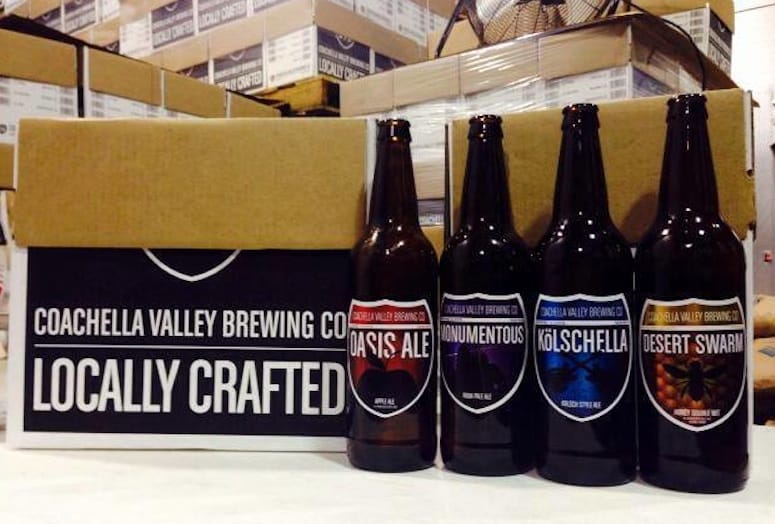 The craft beer craze is riding a wave of popularity.

Sales have grown by 15 percent in the past year, according to Business Insider. Craft brewers only comprise 10 percent of the nation’s total beer sales, but their numbers have jumped to more than 2,500 in the U.S, according to CNBC.

“Things are moving fast in this industry — you must lead, not follow,” says Chris Anderson, CEO of Coachella Valley Brewing Co. (CVB) in Thousand Palms, during one of the recent beer seminars at Food & Wine Festival Palm Desert.

“And we are taking the lead, as we’re committed to crafting beer that showcases our East Valley to produce truly unique beer, using local citrus, herbs honey, and spices — we are here to support local farms.”

The brewery employs a state-of-the-art 17 Barrel Brewhouse and a high-efficiency brew system – one of just five in operation on the planet. It also houses a Tap Room where patrons can visit and enjoy several if the fresh brews on tap. Anderson (pictured at right/Arthur Coleman photo), who is also the Master Brewer at the craft beer facility, is a graduate of the University of Alaska Anchorage Culinary program and a certified dietary manager with more than 20 years of experience.

“We believe sustainability, creativity, and passion are the key ingredients to produce the best craft beer,” he says.

And while Anderson spoke of the brewery’s “farm to glass” approach, the thirsty crowd tasted two samples of CVB’s beer. As with most of his brews, they sport inventive names that are familiar in the Coachella Valley.

Desert Swarm is CVB’s take on Belgian-style light ale brewed with raw un-malted wheat, imported Belgian malt, oats, Punjab coriander, locally grown kumquats and Killer Bee Honey. With a fragrance of citrus and honey, its creamy mouth-feel is contrasted by tart, lip-prickling fizz, carried with nectar-like sweetness which is cut by the kumquats.

The dark beer sample was an Imperial Black IPA, called Condition Black, an ode to the U.S. Marines stationed just an hour away in Twenty-nine Palms, who are often in a “condition black” state of readiness.  It’s CVB’s combination of an India Pale Ale and a stout.

A full-bodied beer with aromas of roasted malt flavors, including coffee, anise and cocoa, and, it carries flavors of intense herbal and piney hops, finishing with a good amount of bitterness.
Anderson and his team continually produce innovative seasonal brews with still more imaginative names such as Oasis Ale (a one-of-a-kind ale and cider medley), Black Widow (a stout), and Palms to Pines (a West-Coast-style triple India Pale Ale).

Current seasonal brews are available on tap and for purchase at the brewery’s Tap-Room. CVB’s brews can be found locally at more than 30 restaurants and bars, such as Eureka Burgers in Indian Wells; the Ace Hotel & Swim Club and the Village Pub in Palm Springs; the Cork & Fork in La Quinta, and the Tilted Kilt and Tommy Bahamas in Palm Desert.