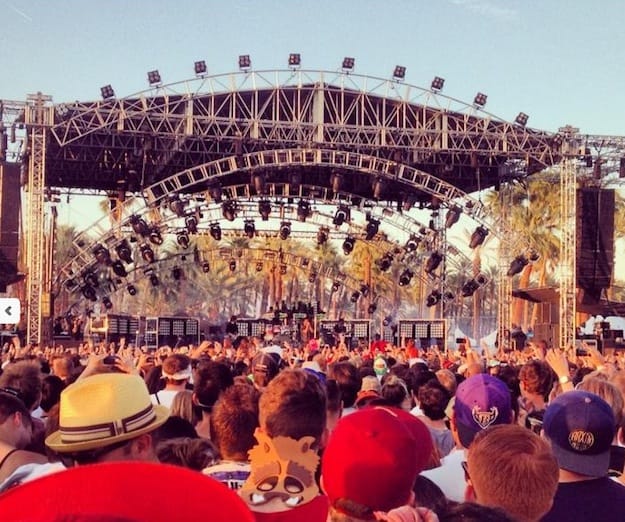 Like an ex that you just can’t get enough of, Coachella is back!

The annual music and arts festival is a cavalcade of indie bands, cutting-edge rappers, and other musicians who converge in Indio to rock crowds in the thousands.

Previous years have boasted booty-shaking sets by Madonna, the hookup of Drew Barrymore and Strokes’ drummer Fab Moretti, the Tupac Shakur hologram (R.I.P, ‘Pac), and my personal foray into public drunkenness with Adeline Danti and members of the Beta Band. Good times…

This year, Coachella’s lineup brings with it a number of fascinations, including possible collaborations between artists. Canadian duo Tegan and Sara, as well as label mate Theophilus London are both booked to perform. Sara Quin partnered with the rapper on his track, “Why Even Try?” Fans, watch out for these two to possibly reteam either or both weekends of the festival.

London also released a duet of sorts with frequent Coachella attendee Solange Knowles (the sartorial superstar formerly known as Beyonce’s kid sister). A reprisal of their work on “Flying Overseas” is a possibility. Last year’s breakout star Frank Ocean could also be back to storm the stage with Odd Future’s Earl Sweatshirt – the latter of whom is set to perform today (April 12) and April 19.

Fashion is sure to be a topic of discussion at Coachella. Previous offerings have included the side boob, Rosie the Riveter head scarves for girls, the revival of the mullet, and animal hats. What will be the coveted look this year? I’ve got my money on more side boob.

Send us your predictions and images from Coachella 2013. Look for us on:

Scheduled after-parties bring the chance to hobnob with hotties, young Hollywood, and other movers and shakers. The Saguaro Hotel hosts Skye Ferreira this afternoon (April 12). Flaunt Magazine is hosting its “tribute” to human rights violations with a Guantanamo Bay-themed party, and Hard Rock Hotel/Zoso Hotel will have a DJ set from Danny Masterson’s alter-ego DJ Mom Jeans today (April 12). Find the nearest publicist, make friends with him or her, and work your way onto the guest list of these fêtes.

If packing for the three-day stint in Indio has left you flummoxed, all is not lost. Remember, you’ll be walking around all day, so stock your backpack accordingly. Travel sizes of sunscreen, antibacterial gel, and mouthwash will make your festival experience better. For a detailed list of what to bring, read our Music Festival Survival Guide.

Perhaps the most anticipated aspect of Coachella is the “what-happens-next?” factor. Will Wu-Tang Clan roll out the Ol’ Dirty Bastard hologram, or perhaps a taxidermy effigy of the late rapper? Will Yeasayer video vixen Kristen Bell show up with newborn baby Lincoln in tow?