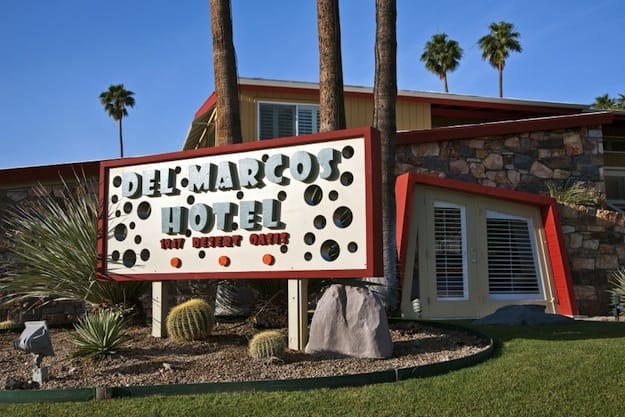 Recreating the past is challenging, especially when the original design was done in 1947.

But the spirit of famed architect William F. Cody is still very visible since the restoration of the Del Marcos Hotel in Palm Springs began over the past two years. Cody originally designed the hotel for owners Samuel and Adele Marcus, and the project was critical to establishing his career in the desert as his first independent commission. He received the American Institute of Architects Design award for the building, which featured a unique mix of native stone and redwood.

The Del Marcos remains a delightful 17 room “ desert oasis” that had begun to show some age. As General Manager Laura Ramstead noted, “This has been less of a remodel than a restoration of the honest designs of the mid-century era, reflecting more of an organic retreat versus a commercial kitsch interpretation.”

Ramstead’s sharp eye for detail and expansive experience in hospitality and estate management has meshed well with owners Lars and Kelly Vickland’s longtime designer, Laura Slipak, and her choices for fabric and furniture selection. The collaboration balanced between design integrity and the need for comfortable utilization, creating a chic homage to the history of mid-century lifestyle and décor.

A design buffs dream, details such as the retro marquee and preserved stone façade complement the clean lines in enhanced furnishings, simple fixtures, as well as the stylized planters that scream modern. Each room has a fresh, minimalist feel where guests can relax and enjoy the infusion of natural mid-century pieces without the clutter.

“We wanted the rooms to give guests nostalgic, but familiar impressions to evoke positive memories of their stay at the hotel,” Ramstead said.

Ramstead also contacted the Palm Springs Preservation Foundation, which spearheaded the Del Marcos’ dedication as a Historic Landmark last year.  Located within the famed “Tennis” neighborhood only adds to the charm and character of the resort. Just one block from the hip, downtown shopping district, patrons can grab a complimentary bike to explore nearby shops, restaurants, and local hiking trails.

Upcoming plans include a temporary hiatus in August for much anticipated bathroom upgrades including Terrazzo installations for bathroom and shower floors.

The efforts of this dynamic team continue to transform the resort into a fabulous Palm Springs boutique hotel in the heart of downtown.

“We wanted to create a destination here at the Del Marcos where our guests can get away from it all but still experience the allure of Palm Springs and all it has to offer,” Ramstead said. “It’s also been important that our visitors share in the positive vibe we’ve put out there. We want happy guests!”