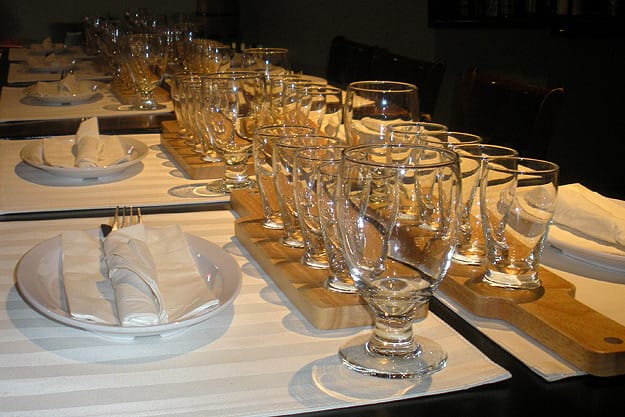 Texas Rangers fans, college frat boys, and Wisconsin ice fishermen may regularly gulp down mass-produced beer. But beer lovers with refined palates looking to complement food appreciate craft brews, which can be as complex and individual as fine wines. Connoisseurs appreciate the color, texture, nose, style, and finish. The craft-beer movement is gaining stature, and many Coachella Valley venues are heightening the level of beer appreciation through diverse offerings, education, and food pairings.

Getting schooled on beer at an Irish pub — what could be better? Brent Schmidman, a man with a passion for home brews and hard-to-find beers, launched Schmidy’s Tavern in 2009. The tavern offers beer tastings Tuesdays at 7 p.m. and a beer class, which showcases brews paired with food, the last Wednesday of the month.

Justin Moeller, a cicerone (certified beer expert, similar to a wine sommelier), heads up beer tasting at Schmidy’s. At a past tasting, members of the Coachella Valley Homebrewers Association tasted a spectrum of beers/ales from Bruery of Placentia and a Berliner weissbeer, Nottenroth.

“Craft brews are taking off,” Moeller says. “We see [consumption] increasing some 40 percent every year.” Ace Hotel & Swim Club has teamed up with Stone Brewing Co. of San Diego to add craft brews on tap at King’s Highway. Committed to raising guests’ awareness of fine beer, the restaurant hosted its first craft-beer dinner over the summer.

The five-course tasting menu paired a sweet corn soup and crab and avocado salad with Stone’s Ruination IPA. Asparagus and ricotta ravioli with prosciutto in lemon cream was paired with Black Market Hefeweizen. Peaches poached in New Belgium Trippel were served over shortcakes with mascarpone whipped cream and paired with Avery Salvation.

“The right beer paired with the right dish can really enhance the flavor of the food,” says Stone Brewing Cicerone Bill Sysak.

During the holidays, the Ace will feature dinners paired with craft beers and handcrafted cocktails.

Although the beer-pairing dinner is offered only once a year, The 3rd Corner offers craft beers, as well as fine wines. Ask for recommendations with your meal, advises General Manager Marc Plummer. Babe’s Bar-B-Que & Brewhouse, with the desert’s only on-premise brewery, has been winning awards for its craft beers since it began entering competitions in 2002.

“Our brew master, Hans Johnson, who was with us for the first five years, helped us get the brewery off the ground, with the idea that we would start competing,” says Art Vasquez, chief operating officer. “We won three awards in the Australian International Beer Competition in 2003.”

Current brew master Scot Grabbe has led Babe’s to many more awards at the Los Angeles International Commercial Beer Competition, winning a bevy of gold, silver, and bronze since 2009.

The first day of fall, when Oktoberfest traditionally kicks off, Babe’s switches out its summer brews for ones that celebrate the season: Babe’s Dunkel Weizen (dark) and two guest drafts, Firestone’s rare Oaktoberfest, in a limited number of kegs, and German Schneider Adventus.

The first weekend in October, Babe’s three-day Oktoberfest on the patio includes bratwurst and its celebratory beers on tap, complete with German music.

Vasquez is taking Babe’s award-winning craft microbrews up another level with a marketing strategy to “drink local with pride” as Babe’s Honey Blonde Ale and Blackfin Lager will be available at select bars and restaurants in the valley. In addition, a limited-bottle production of the seasonal Babe’s Bin 412 Oaked Strong Ale will be marketed in the valley.

Backstreet Brewery/Lamppost Pizza sources its craft beer from its locations in Irvine, Vista, and Ladera Ranch, according to La Quinta owner Ron Barro.

“We used to brew here,” he says. “Our other three breweries produce enough for us.” Yard House is named after the 3-foot long glass containers used by stagecoach drivers to quench their thirst after a long journey. Each Yard House features a center island bar circled by a fleet of tap handles with brews ranging from classic lagers to more obscure ales.

The Beer Hunter Sports Pub & Grill, which opened in Palm Desert in the early 1980s, was one of the first local pubs to offer a worldwide selection bottled beers. It sported tally-style contests to see who had tried the most beers. Hearty, healthful, and locally sourced products as well as from California’s abundant regional farms inspire Rockwood Grill Executive Chef Oliver Wolf. “Whenever we can source locally, we do,” Wolf says. “We use Blue Star Lounge Lager (or BSL Lager) for our Carlsbad mussels. Backstreet Brewery in La Quinta brews it exclusively for us.” BSL Lager is available in the Blue Star Lounge on tap.
Rockwood Grill and Blue Star Lounge.
74855 Country Club Dr., Palm Desert,
760-341-2211;
www.desertspringsresort.com