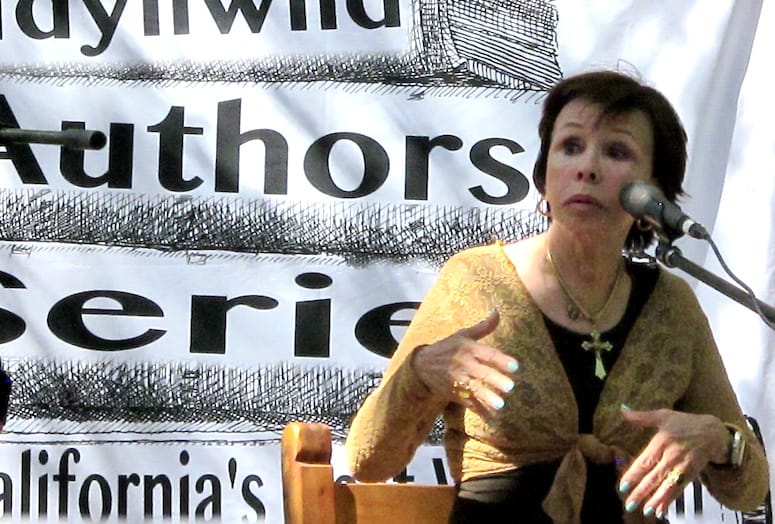 Steve McQueen was the ultimate anti-hero. Rugged, moody, and combative with directors, but beloved by moviegoers.

Best known for The Great Escape, Papillon, Bullitt and The Thomas Crown Affair, actor Steve McQueen’s legend lives on — with a little help from his first wife.

“You are the first and foremost Mrs. McQueen,” Eduardo Santiago quips in his introduction of Neile Adams at the Idyllwild Author Series on June 1 (pictured at bottom). “The other two didn’t last long.”

Adams was in Idyllwild recently to tout the 20th anniversary of her book, My Husband, My Friend, revealing the story of her 16-year turbulent marriage to McQueen, who died in 1980. In the early 1960's, Adams and McQueen lived in Palm Springs at The Southridge house designed by architect High Kaptur. McQueen later brought actress Ali McGraw to the house after they fell in love during filming of The Getaway and married in 1973.

Petite and attractive at 81, Adams dished with the crowd of approximately 60 book lovers on the deck of Café Aroma.

Adams says that she originally wrote the book to grieve.

“I was recently remarried to Alvin (Toffel) when Steve died,” Adams explains. “We had two children together, so instead of running into the closet and crying, I started writing.”

During the discussion, Adams revealed two “secrets” from her book, including the name of the man whom she had an extra-marital affair, and her illegitimate connection to the Julio Iglesias clan.

Fed up with McQueen’s affairs, Adams had one of her own with Maximilian Schell, an Oscar-winning Swiss actor.

“Even though Steve had many affairs, he never expected me to have one,” Adams says. “He put me high on a pedestal and then I fell – with a thud.”

Afterwards, she says McQueen didn’t recover, and that’s when the violence in their marriage began. She was encouraged by a therapist to “get out of danger” and file for divorce. McQueen received final divorce papers while on the set of The Getaway.

Ironically, Adams admits to having an affair with McQueen while he was still married to McGraw.

“It’s complicated,” Adams says. “I believed that he was still mine.”

Growing up in the Philippines, Adams was the illegitimate daughter of Jose Arrista, the maternal great-grandfather of Enrique Iglesias. It wasn’t until she met socialite Chabeli Iglesias that she saw a photo of her father.

Adams was already established as a Broadway dancer in Kismet (as one of The Three Princesses of Ababu) when she met McQueen outside a health food store.

“She’s the only one around who knows Steve McQueen’s entire body of work,” exclaims Steve Moyer, her publicist. “I think Steve should have gotten an Oscar for Papillon,” Adams says.

McQueen never received an Academy Award, but was nominated in 1966 for The Sand Pebbles.

McQueen grew up with a single mother who had multiple marriages, and bounced around the country, ending up in reform school. He spent three years in the Merchant Marines and was selling encyclopedias when he met Adams. They lived together for a while, until McQueen proposed.

“Steve didn’t like to be left alone. He had abandonment issues,” Adams explains. “When I was on the road, my mother called me saying that Steve was putting the ashtray in the fridge, and that we should get married.”

McQueen put $20 down on a $40 wedding ring, and proposed. Adams still has the ring.

Currently, Adams performs in a one-woman autobiographical cabaret show, The Lives of Me.

Held every Sunday until Aug. 3, The Idyllwild Author Series continues on June 8 with Mark Sarvas’ 2008 novel, “Harry Revised,” about a man who tries to reinvent himself after his wife dies from breast enhancement surgery. Other authors in the series include: Cynthia Bond, Ben Loory, Joy Sikorski and Michael Silversher, Richard Barker, Josefina Lopez, Bernard Cooper, Rob Roberge and Dete Meserve.