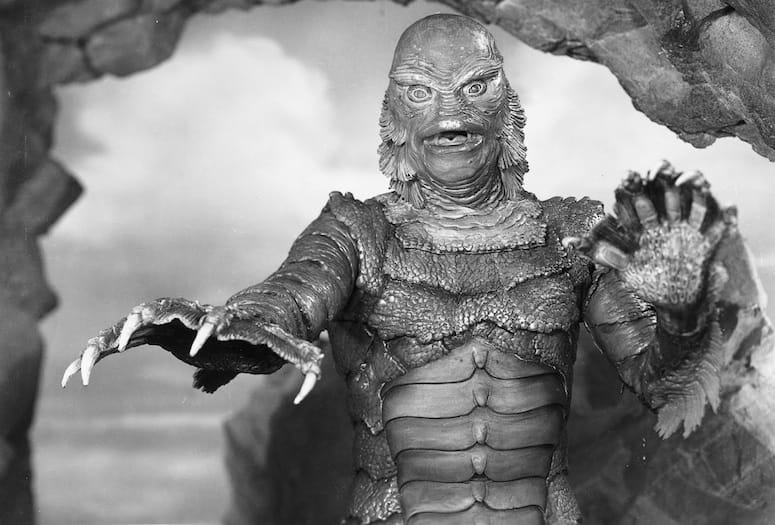 The Black Lagoon will screen at the inaugural Palm Springs Classic Science Fiction Festival at the Camelot Theaters, Oct. 23-25.
Photo courtesy of shocktilyoudrop.com

Science fiction fans. Your voice has been heard.

“The notion for this event has been germinating for quite awhile, and it is fantastic to see it come to fruition this year,” says festival producer and host Alan K. Rode, who has been producing the annual Arthur Lyons Film Noir Festival at the Camelot for the last eight years.

• See related story: David Hedison Got to be That 'Fly' on the Wall

PSCC Executive Director Michael Green agrees. “We believe there is a viable audience for these films, and we are excited to expand our relationship with Alan in bringing a new genre of classic cinema to Palm Springs,” he says.

The Sci-Fi Festival will follow a similar format to the Arthur Lyons fest with Rode introducing the films plus conducting interviews with featured special guest stars after several of the screenings.

“I’ve programmed some of the all-time classic sci-fi films from the 1950s along with some spectacular guest stars," said Rode. A scene from Invasion of the Body Snatchers.

10 a.m.: Invasion of the Body Snatchers (1956) 80 minutes. Director: Don Siegel. A doctor returns to his hometown and discovers a weird epidemic of people claiming that their loved ones are emotionless imposters. The grimmest and most allegory-laden of all sci-fi movies memorably stars Kevin McCarthy as the initially bewildered sawbones along with a gorgeous Dana Wynter, Carolyn Jones, Larry Gates and King Donovan.

7:30 p.m.: The Incredible Shrinking Man (1957) 81 minutes. Director: Jack Arnold. The film that created an altogether different perspective of cats and spiders remains one of the most well made 1950s pictures of any genre. Grant Williams portrays the proportionally shrinking Scott Carey, whose entire world literally closes in on him. Richard Matheson adapted a suspenseful script from his novel that is heightened by ingenious special effects and stellar supporting turns by Randy Stuart, April Kent, Paul Langton, Raymond Bailey and William Schallert. A scene from It Came From Outer Space.

4 p.m.: Them! (1954) 94 minutes. Director: Gordon Douglas. Those annoying atom bomb tests strike again create a nest of gigantic ants in the New Mexican desert that threaten the world. The first of the “big bug” flicks remains the absolute best of its kind with crackling performances by James Whitmore, Edmund Gwenn, Joan Weldon, James Arness and Onslow Stevens. Filmed on location in the Mojave Desert and the downtown Los Angeles river basin.