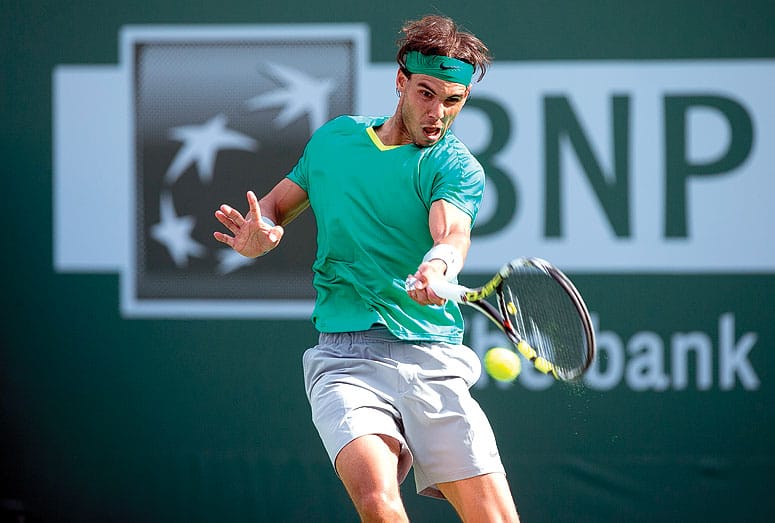 His dark eyes never stray from the ball during a rally, and his feet dance like a boxer’s beneath legs thick with muscle. No. 1 in the world — again — Rafael Nadal is a fluid portrait of fitness, intensity, and focus. In a recent interview, Nadal describes his passion for tennis, his amazing comeback, and his love of the desert and the BNP Paribas Open in Indian Wells.

PSL: BNP Paribas Open unveils its new 8,000-seat Stadium 2, which promises to be much more intimate. Do you enjoy having the fans closer, or do you prefer the larger venues?

Nadal: I love the small, cozy stadiums but also enjoy very much the center court of Indian Wells or the U.S. Open. They both have pretty special feelings, but different.

PSL: What is your diet like during the BNP Paribas Open? Do you cook for yourself while in Indian Wells? If you eat out, what are some of your favorite places?

Nadal: I am very lucky. Mr. [Larry] Ellison’s people at Porcupine Creek treat me and my team very well. I also sometimes go to nearby restaurants to have sushi or steaks.

PSL: We know you like to play golf when you’re here. How else do you entertain yourself when not playing or training?

Nadal: Not much more do I do, believe me. Tennis, competition, practice, and my beloved golf take most of my time. And I have to say I enjoy it very much — wouldn’t change that week!

PSL: You came back last year from a difficult knee injury and six months off. Were there times when you questioned if you could get back to the same level of play?

Nadal: For sure. As a matter of fact, Indian Wells was kind of a turning point for me [in 2013]. I got to Indian Wells with a lot of doubts about winning on hard court. Winning in Indian Wells and defeating top players boosted my confidence.

PSL: Your comeback has been phenomenal. Do you think 2013 was the best year of your career?

Nadal: It was definitely one of the most meritorious years, since I started the season late without playing the first Grand Slam of the year and managing to end at No. 1. It was a very emotional year.

PSL: What is one of your most memorable off-court experiences in Indian Wells?

Nadal: I have so many memories that it is difficult to say. Having dinners with Larry Ellison and his guests is a privilege for me, and to play at amazing golf courses [including some] rounds with Freddie Couples. Also to play soccer on that pitch next to the practice courts [at Indian Wells Tennis Garden]. Those two weeks in the desert are magic.