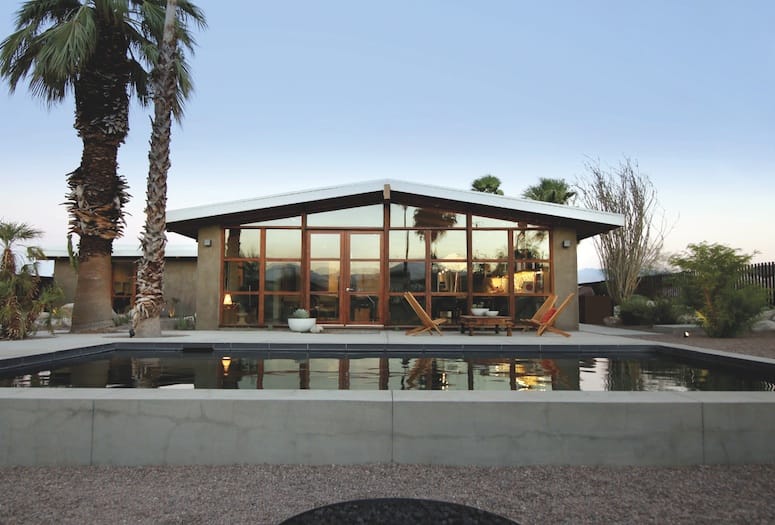 Two years ago, this Chino Canyon house reeked so badly that Duane Smith and Stefane Barbeau’s real estate agent immediately turned around and walked out. He told them it was a teardown. But the native Canadian house-hunters saw beyond the odor, the odd layout, and the whitewash finish hiding the wood ceiling.

“There was something really intriguing about the windows, the ceiling, the rocky landscape,” Smith says. “It felt like a midcentury modern cottage in the middle of nowhere.” In fact, it was. Erected long before the Palm Springs Aerial Tramway, the 1954-built home was a pioneer in this still-rustic neighborhood. Surrounding houses date to the 1970s.

Because it would require a major renovation, the two continued to look. “But we just kept coming back to it,” Smith says. “I started sketching and thinking about the opportunities.”

“We tend to be very pragmatic, so we made a decision matrix to consider all the factors,” Barbeau adds. 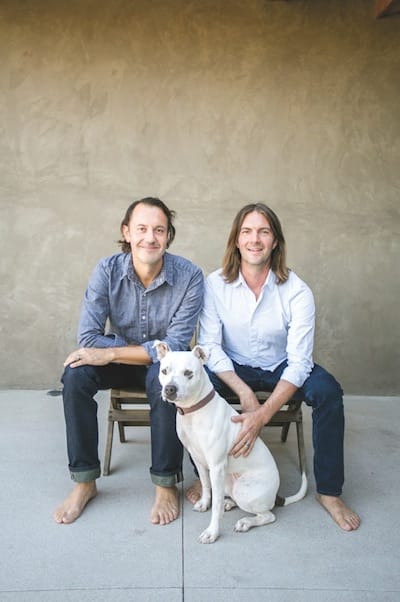 The structure won their hearts for its mix of midcentury modern and Craftsman characteristics. Research into city records revealed a building permit, but not the name of an architect — only a reference to “Holiday House.”

Smith, who heads up an architectural business called Hundred Mile House, speculates that a young architect at an established firm may have designed the home. “There are unique elements that don’t show up in any other house,” he notes, “such as the architecture of the windows. The angular cut wasn’t necessary, but it’s an interesting detail.”

While living in Boston, they ran a home furnishings store called Vessel and bought a summer house in Cape Cod. After relocating to Los Angeles when Smith was recruited to lead product design at Targus in Anaheim, the couple set out to find a desert house they could enjoy during off-season and offer as a vacation rental during peak tourism months.

“We lived in a loft — super urban — and were missing an escape,” Smith says. “Southern California is all about indoor-outdoor living, but we had no outdoor space.” 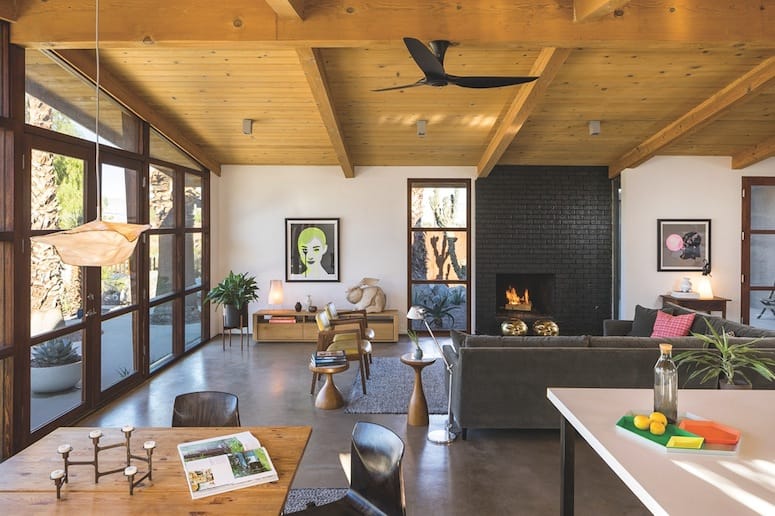 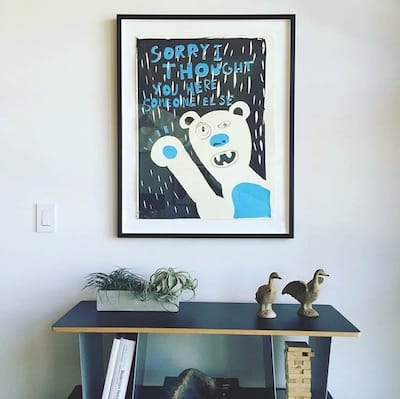 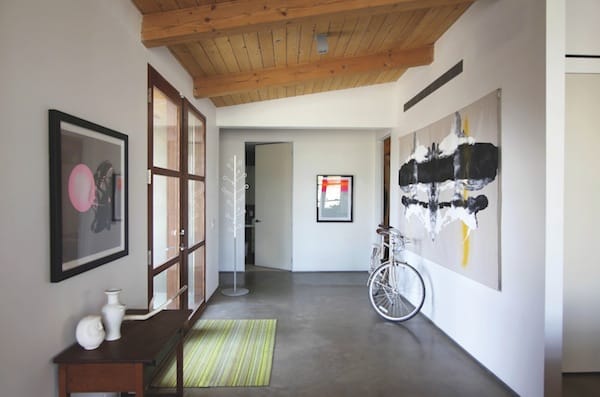 Even their pit bull craved a more natural habitat. “Sally was a big part of our decision to move here,” Barbeau says. “Any dog in downtown L.A. is a nervous wreck.” They had visited Palm Springs before moving out West and liked the architecture and landscape.

“It’s such a novel place for people from Canada,” Smith says.

What they do see from their quarter-acre, acute-angled corner property is an intimate view up the canyon. Befitting the raw terrain that surrounds them, they framed their lot with rust-patinaed Cor-ten steel, mixing solid walls for privacy and posts to frame the views.

“As we got closer to completion, we started thinking, ‘Why are we paying two mortgages and renting in L.A.?’ We made the decision to give up the L.A. apartment,” Smith says.

The original footprint comprised a little more than 1,100 square feet, which now serves as the main living area. The pair took the home down to studs, sandblasted the whitewashed Douglas fir ceiling, resurfaced the concrete floor, and refaced and reglazed the main window wall. The rest of the house is a new structure built to match the original. Smith and Barbeau added a wing that doubles the home’s size to 2,250 square feet of polished concrete.

“Our house became a spot to experiment,” Barbeau says, noting that the project gave his husband a chance to try out architectural elements he wanted to offer his Hundred Mile House clients. Smith is currently working on renovations in Washington and Florida through his firm. Barbeau runs a private yoga practice, Clinic Yoga, and serves as executive director of the Design Industry Group of Massachusetts. The couple has been together 22 years and married for two.

Barbeau recalls reaching a crossroads in their design decisions when they had to determine whether to strip the home to its bones and maintain the original intent or change it completely. They opted for the difficult challenge of retaining the original intent while designing an addition to look like it had always been there. 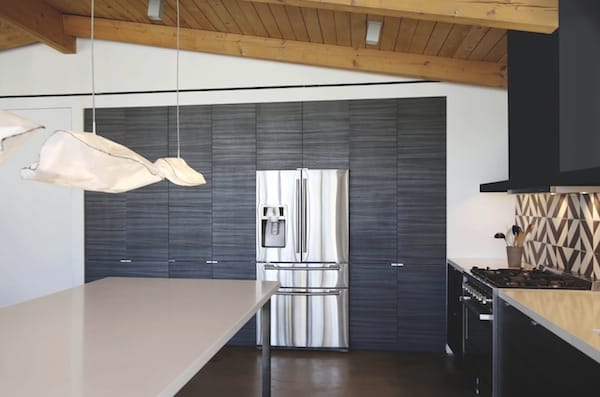 (Clockwise) IKEA cabinets with laminate fronts and simulated wood grain; handmade tiles from Nicaragua; and Tyvek “clouds” of light designed by Smith and Barbeau. The pool, with a black pebble finish, reflects the stellar views.

Barbeau recalls a crossroads when they had to determine whether to pull back the layers to the home’s original intent or change it completely. They retained the intent — then designed an addition to match. 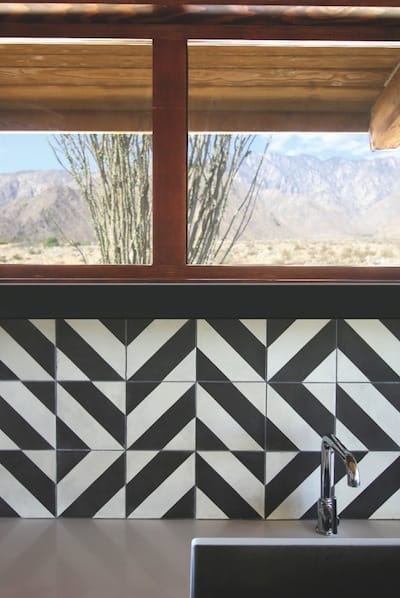 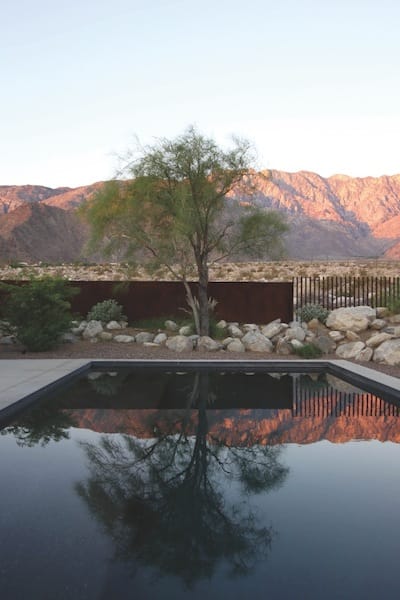 The great room takes advantage of the north-facing, Craftsman-like window wall, beyond which they installed a pool with a full-length tanning shelf in a black pebble finish. Along the great room’s back wall, over the kitchen shelves, they placed windows that capture mountain and tramway views. Underneath, handmade cement tiles with black-and-white diagonal stripes make the backsplash pop.
“We tend toward minimalism, but this is the one spot in the house with a bold pattern,” Smith says. “Every tile is identical. You could make a chevron or Xs, but we created randomness by rotating them.”

Half of the home’s furnishings come from their previous residence, including pieces that once belonged to Barbeau’s parents. The L-shaped living room sofa and white oak pieces from Belgium’s Ethnicraft were purchased specifically for the house. Items of their own design include shelving in the dining room and master bedroom.

The addition resulted in an L-shaped three-bedroom, two-bath house that includes (from front to back) a studio and office space where Barbeau conducts private yoga training; a guest bedroom that shares a courtyard with the studio; a bathroom that opens to the guest bedroom and to the hallway; and the master suite. 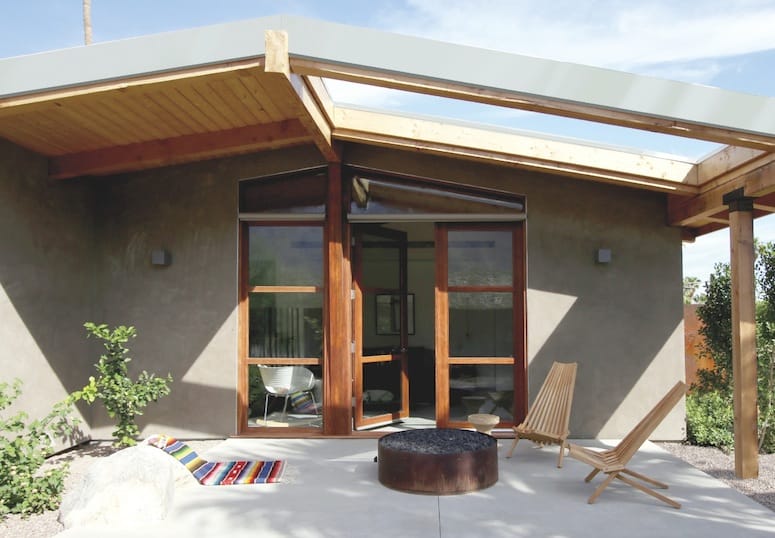 The latter features a peaked Douglas fir ceiling that matches the one in the great room. Views of the tramway come in through the French doors and clerestory windows. Outside are citrus trees and rosemary plants.

The exterior of the house was re-stuccoed to a smooth finish but left unpainted. “We wanted a cast-concrete look in keeping with the rawness of the steel and the exposed wood on the eaves,” Smith says. 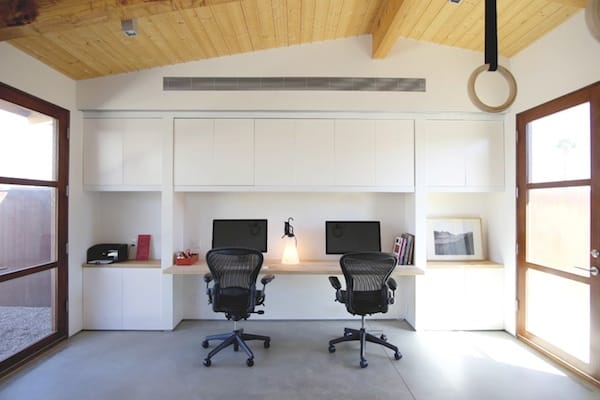 TOP: The master bedroom opens to a backyard patio and takes advantage of mountainside views. ABOVE: Built-in cabinetry provides storage and work space in the studio/office. The floor remains clear for students’ yoga mats.

Site excavation, particularly for the pool, unearthed several boulders. Smith and Barbeau kept some for their own landscape and put an ad on Craigslist to dispose of the rest — a total of 30 tons of rock. Much of the greenery they planted is native, including paloverde, creosote, and palm trees.

While they kept their budget down by doing a lot of the work themselves, Smith and Barbeau wanted a luxury master bath. Creamy white, dot-textured porcelain tiles cover the floor and one wall; gray porcelain tiles cover facing walls. Floor-to-ceiling glass on the exterior wall and a narrow skylight above the shower flood the room with natural light. The tub filler is a ceiling mount, as is the rainfall showerhead on the other side of a glass wall that separates the freestanding tub from the walk-in shower. 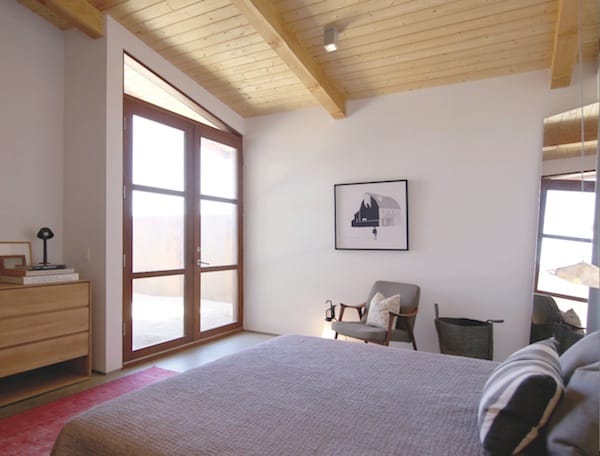 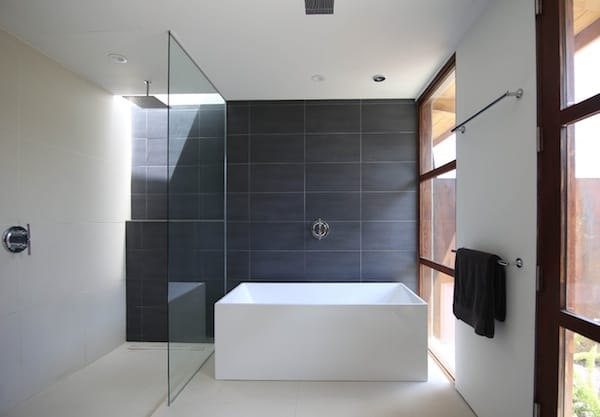 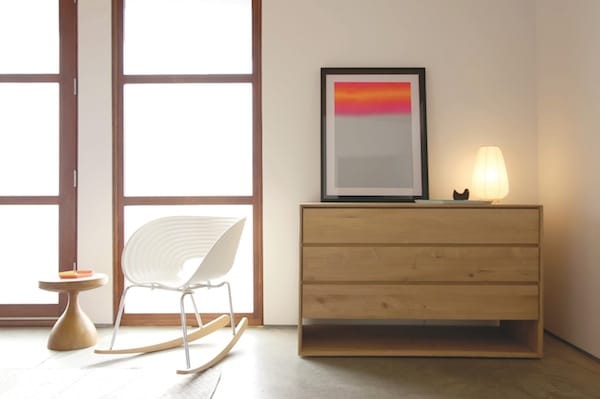 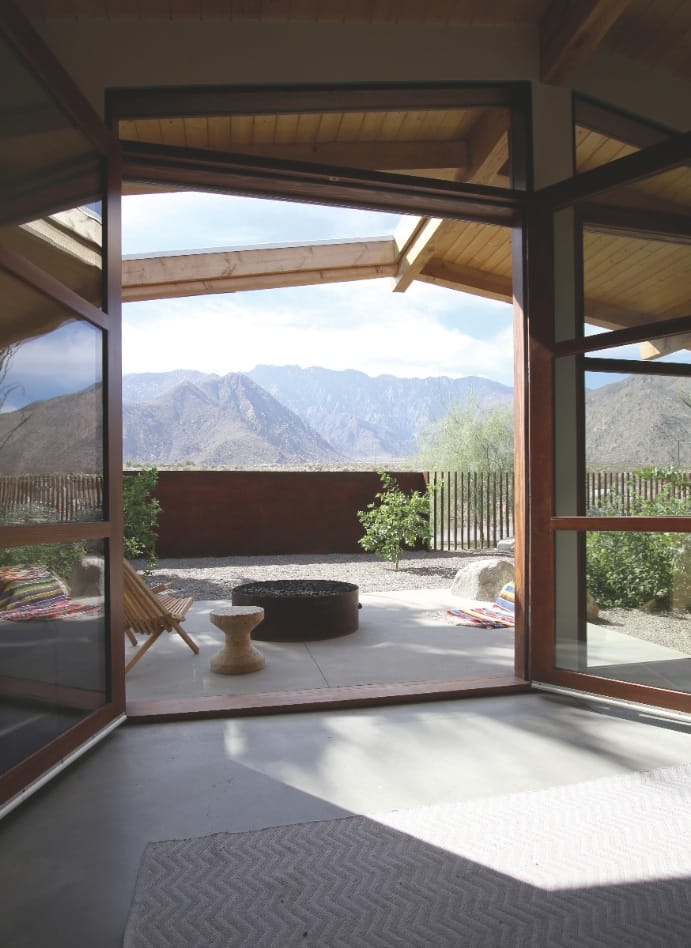 ABOVE: Off the master bedroom, a patio provides sun and shade.

The shower skylight adds natural light to the master bathroom.

A Tom Vac rocking chair offers a place to relax.

Sally loves her new home as much as the men do. “When she came out here [during the renovation], she was relaxed and happy,” Smith says. “Mostly, she seemed excited about the calmness and her new access to nature. And she was an amazing job-site dog throughout construction.” Smith brought Sally with him every week when he came to visit the site. Exploring the property, she would find a trench that had been dug, a new hole in the concrete floor, or a pile of dust to curl up for a nap while the tractors and jackhammers buzzed all around her.

“We did have some social and cultural concerns about leaving L.A.,” he admits. “But since moving here last February, we have made more friends than we did in the three years we lived there. The creative community is great.”

“We get a lot of nice affirmation about our decision,” Barbeau adds. “Every morning, we go for a walk up in the mesa. It’s a nice  way to start the day.”