H.N. and Frances C. Berger’s legacy extends from the desert to Haiti 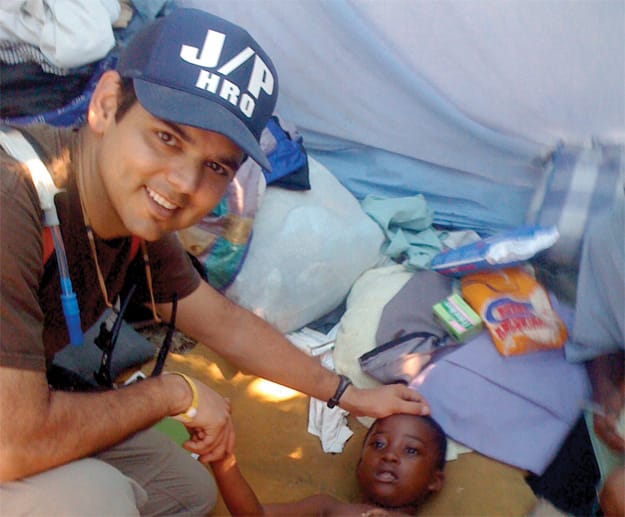 In January, Raul Ruiz was mobilizing medical supplies and personnel to key locations throughout Port-au-Prince when he received a call from Eisenhower Medical Center, where he works as an emergency physician. Eisenhower Foundation President Michael Landes told Ruiz that the H.N. and Frances C. Berger Foundation in Palm Desert was donating $1 million to Haiti earthquake relief efforts.

“I was overwhelmed with joy, and I felt extremely proud that the Coachella Valley community would step up to the plate to provide support for the vulnerable population of Haiti during this devastation,” Ruiz says.

The Berger Foundation, which moved to the desert 16 years ago from Arcadia, made the donation “on behalf of the kind and giving citizens of the Coachella Valley.”

“We are part of the people here,” says President and CEO Ronald Auen. “This is our home.”

With a net worth of $450 million, the foundation zeroes in on local causes, but extends its reach nationally and, in the case of Haiti, internationally. The executive committee of Auen, Christopher McGuire, Douglass Vance, and Darrell Burrage previously committed $5 million to Katrina relief efforts but “were a little disappointed in the results,” Auen says, noting a lack of reporting on how the money was spent. After reading in the newspaper that Dr. Ruiz was on the scene in Haiti, the committee decided to use him and Eisenhower as conduits for a donation to Samaritan’s Purse. Ruiz talked with the head of the organization and spent a full day looking at its facilities and program to distribute food and shelter.

“I feel very confident that the money is going to go directly to the people and will provide much-needed services,” says Ruiz, who arrived in Haiti on Jan. 20 and returned to the desert Feb. 13. “The imminent crisis is the rainy season in Haiti. If the population does not have adequate shelter, then we are going to see devastating communicable diseases that will produce needless loss of life.”

Desert residents may be more familiar with the Berger Foundation’s local contributions, including three years of free Second Sundays at Palm Springs Art Museum. While free admission is designed to expose even people with limited means to cultural opportunities, it’s the programming that the $300,000 grant covers (films and lectures, live performances, artist demonstrations, family activities, and more) that has increased attendance from 233 people on a February 2009 Sunday to 1,741 people on Feb. 14. “That’s been very exciting for us,” says Bob Bogard, the museum’s marketing director. “It’s become a real event even for members.”

In partnership with CBS affiliate KPSP Local 2, the foundation awards a $25,000 grant each month to a desert charity. The Western Coachella Valley Police Activities League (the first recipient in December 2008) applied $15,000 to expand its summer camp program for children in low-income families and $10,000 to expand its VICE (Volunteer, Integrity, Community Service, Education) program in which high school students perform 40 hours a month of community service.

PAL Executive Director Alanna Reichle says the grant helped 100 kids who would otherwise not have experienced camping, fishing, boating, and hiking during the summer and allowed an additional 47 students to participate in the VICE program. But the money was only part of the benefit. “The idea is [the TV station] spends the entire month highlighting the charity and the things they do,” McGuire says. “They get a tremendous amount of exposure that they would not have gotten.”

With one of its key missions being education, the foundation twice “adopted” elementary classes in Pasadena through the I Have a Dream program. In addition to funding mentorships, transportation, and an after-school building with computers, the foundation gives each graduate a partial college scholarship. The first-grade class it adopted 12 years ago graduates this June.

The foundation’s educational efforts extend to charitable organizations themselves. Executive committee members use their development backgrounds to oversee construction of buildings (such as a shelter for abused women) and their business/financial acumen to advise charities on how to wisely apply funds. Even the Classic Club golf course and clubhouse, which the foundation owns, began as an educational project.

“This was going to be a university campus,” Auen says. When the university fell through, the foundation had already begun developing a golf course; and so a relationship was established with the Bob Hope Classic tournament that benefits multiple local charities. Although the Classic Club no longer serves as host course, the foundation continues to donate to the tournament. But, Auen says, the loss has actually expanded its base. In December, he announced that the club was reducing greens fees for charity tournaments to maximize fundraising efforts even during high season. The club also introduced a $45 resident rate for all Coachella Valley citizens.

Now the foundation is developing educational programs at the club, such as culinary training in the new Bellatrix restaurant, golf course management and maintenance training and internships, and agronomy for College of the Desert and even out-of-state universities with golf-course management studies.