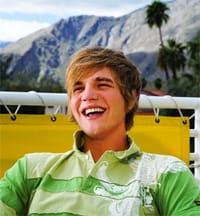 It’s early on a Tuesday morning and Taylor Handley feels tired: normal circumstances for a 22-year-old visiting Palm Springs during the first blush of spring. There are the bars, the restaurants, and the golf courses to be considered, after all — and one can’t fault a young man for going out and painting the town.

But this morning, Handley has makeup and hair stylists attending to him. Meanwhile, a camera crew hustles to set up on the balcony of Palm Springs’ historic Movie Colony Hotel with the promise of two hours of picture-taking beneath an already hot sun; and, across town, an entire production company awaits Handley’s return.

Now it’s clear: Handley’s night on the town consisted of shooting scenes for the pilot of Hidden Palms, the Kevin Williamson-helmed drama that received a midseason order from the upstart CW network.

Built out of the ashes of the former UPN and WB networks, CW debuts this fall (locally on Channel 5) with a slate of programs aimed squarely at the youth market, with series such as Everybody Hates Chris and One Tree Hill alongside family favorite 7th Heaven and reality stalwart America’s Next Top Model.

Hidden Palms is one of only three new shows to which the network has committed; and though it will debut in midseason, advertisers have high hopes that the show can gain the buzz of Williamson’s previous hit: the long-running Dawson’s Creek.

Meanwhile, Palm Springs tourism and marketing leaders are salivating at the opportunities that a hip show set in Palm Springs could bring. As the pilot began shooting in the Coachella Valley, Handley was cast as a

15-year-old high school student who moves to Palm Springs after his father’s suicide and must come to grips with a new life under the roof of his mother, played by Gail O’Grady (NYPD Blue) and her new husband (played by D.W. Moffat), only to find that nefarious goings-on are occurring in what appears to be a bucolic setting.

If all goes according to plan, by next March, Handley might be as synonymous with Palm Springs to today’s generation as Bob Hope, Sonny Bono, and Frank Sinatra were to yesterday’s.

But on this morning, Handley doesn’t know what his fate will be. He knows only that he’s thrilled to be involved with the pilot — and hopeful it will take off.

"Kevin Williamson is an amazing writer, so being able to work with him is very exciting," he says. Handley had a recurring role on Dawson’s Creek before embarking on a successful turn in The O.C., Fox’s popular teen soap. Between the successes, he took part in six pilots that the networks declined to pick up. So the opportunity to be the ostensible lead in a series led by Williamson, Handley concedes, is a tremendous break.

"It’s what I’ve been training for since I was 6," he says. "I started doing plays when I was 6 or 7 years old, and ended up doing summer stock every year until I was 13, at which point I decided I wanted to take it to a different level."

That level meant agents and auditions and an adult dedication to the craft, which Handley says paid off quickly with a role in the popular film Jack Frost in 1998, followed in short order by a star turn in the 2000 Disney Channel movie Phantom of the Megaplex. But it wasn’t until he played the villainous Oliver Trask on The O.C. that he became a household name — at least in the households of teen girls. A quick tour of the Internet reveals a fan base filled with pubescent devotion (think David Cassidy circa 1972) that likely will work itself into a frenzy with the premiere of Hidden Palms.

Still, Handley says he doesn’t get too caught up in any of that. More than anything, he views this next phase of his life as pivotal. "When I was a kid," he says, "acting was just something fun. I didn’t know it was going to be my career. But now it’s what I’m really passionate about."

Critics have begun to notice. Handley was roundly praised for his recent role in the Hallmark Hall of Fame TV movie In From The Night. Working opposite Academy Award-winner Marcia Gay Harden, Handley convincingly played an abused teen smoldering from a past too difficult to reconcile. "Normally," he says, "I’m able to look at my roles from the perspective of my own life, but that character was nothing like me. There was nothing I could find that was the same."

While also dissimilar to any chapter in his life, the latest installment of The Texas Chainsaw Massacre franchise (due for release later this year) presented no problem for Handley. "Running around covered in blood from a maniac with a chainsaw? That’s just a great time," he says.

Other upcoming projects include the feature-length Western drama/love story September Dawn and the coming-of-age tale The Standard, but it’s Hidden Palms where Handley’s immediate future rests. A successful run could launch him into the rarefied air — and glare — of young Hollywood success, albeit 120 miles east on Interstate 10.

It isn’t entirely clear if Hidden Palms ultimately will shoot in and around Palm Springs. Locations as far-flung as New Mexico, San Diego, and Valencia have been mentioned has possible alternatives; and if Vancouver and Toronto can stand in nightly for every American city with a population above 50,000, anything is certainly possible. But Handley has grown fond of the desert during his stay. "I love to play golf," he says, before explaining how close he came to shooting a solid round at Indian Canyons Golf Resort before taking an eight … or maybe it was a nine, he’s not really sure … and, well, it all went downhill from there.

Sand traps notwithstanding, Handley still hopes the show ends up shooting more than mere exteriors locally. "I’ve been so busy filming that I haven’t had the chance to really enjoy the town," he says. And then, before he can actually stifle it, a yawn slips out. "See?"

A few moments later, however, he is standing on the balcony of the hotel, resplendent in a white resort ensemble. All traces of fatigue are gone. The photographer begins adjusting the lighting; the hair, makeup, and wardrobe folks lift, smooth, tuck, and brush; and Handley handles it all with good humor and conversation.

Visitors surrounding the pool below look up with a small amount of curiosity (this still is jaded Southern California). An older woman in a flowered swimsuit snaps a photo with her digital camera. But when the photographer’s camera starts clicking away, you suddenly witness what the teen girls must see: the easy smile, the gentle demeanor, the lithe frame.

The star — and potentially the next face of Palm Springs — is ready for his close-up.