A State of Health 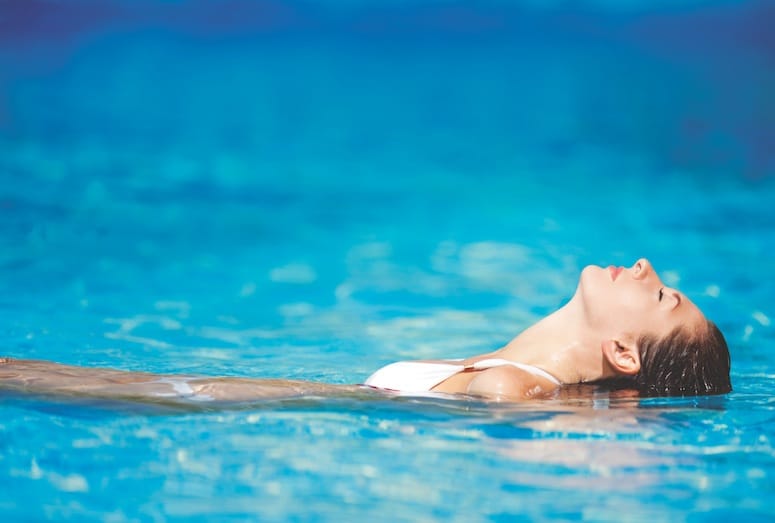 No matter where they’re located, hot springs are transcendent by nature. The otherworldliness of steaming water rising from the depths of the earth carries with it the power to silence thoughts and words replaced by the visceral awe of the mysteries of the natural world.

A Spring in the Low Desert

And it must have been in ancient times when the mists of Sec-he rose from the desert floor, an oasis of mystery enveloped in palm trees. These waters, now known as Agua Caliente Hot Mineral Spring, located in the heart of Palm Springs, were a significant source of community and life for the indigenous Cahuilla people. Considered a point between the physical and supernatural worlds, the steaming hot springs were representative of a basic force from which all things are created. Bathing in its waters brought protection of the spirit. Cahuilla legend holds that the spring itself was brought forth from the earth by the “head man,” Tu-to-meet, who, sick and ailing, struck his staff into the ground, twisted it and, when the water poured out, declared that this boiling water is “… to be there forever and always for the sick.” Whether mythology or simply the visionary gift of those who live close to the earth, this understanding of the power of the spring’s ability to heal was prescient knowledge.

Many lifetimes later, in the late 1800s, explorers and settlers began arriving in the desert, thanks to new stagecoach trails and the Southern Pacific Railroad connecting points east and west. By this time, the spring had been dubbed “Agua Caliente” by Spanish explorers, a name ultimately adopted by the local band of Cahuilla. Amid this new flush of discovery and of non-natives, the spring’s capacity to restore energy and health — and become a business — came alive with opportunity. Cahuilla culture is traditionally one of sharing. They lived for centuries in relative peace with neighboring tribes and clans, trading goods so all could thrive. In this same spirit, the Cahuilla shared their magical spring for the greater good, and the first public bathhouse was built on the spring in 1889. The original bathhouse, little more than a rustic hut, was a hit. Falling into disrepair, it was torn down and replaced in the mid 1910s by a new one, this time built and managed by the tribe. The new two-room structure was large enough to cover a pool (to create a sweat room) and allow for several people at once to stand in the curative waters.

Around this same time, the dry desert climate was becoming a destination for health-seekers as well as people with such chronic health challenges as asthma, arthritis, and tuberculosis. Among the first to accommodate these travelers, Dr. Harry Coffman’s Desert Inn Hotel and Sanatorium opened in Palm Springs in 1909.

Offering guests medical treatment as well as an opportunity to practice a healthy lifestyle of good food, exercise, and proximity to nature, the inn was intentionally located near the Agua Caliente hot spring, giving convenient access to its healing waters. “To forever be there for the sick,” the Cahuilla’s warm, 12,000-year-old waters offered relief from pain and an undeniable invitation to relax body and mind.

There’s a Miracle in Those Hills

Little more than 10 miles north of Agua Caliente, another quite separate hot spring story was unfolding in the desert. In the parched landscape of what is now Desert Hot Springs, a feisty adventurer named Cabot Yerxa laid claim to a 160-acre homestead that he called Eagle’s Nest.

To survive in this parched climate, he regularly journeyed east to a spring (later known as Two Bunch Palms) to gather water. As lore has it, a local Native American — on witnessing Yerxa haul water and supplies up to Eagle’s Nest with the aid of a black burro named Merry Xmas — made a brilliant suggestion: Dig for water closer to home.

Following this sage advice, Yerxa dug an exploratory hole and soon discovered steaming hot water. Fearing it might contain arsenic or be otherwise toxic, he dug a second well about 600 yards away and, this time, found cold water. Struck by his good fortune and this amazing natural phenomenon, Yerxa named the site Miracle Hill. While clearly an unusual phenomenon, the miracle was that he happened to dig on either side of the San Andreas Fault line, accessing two different aquifers completely by accident. Many adventures later, Yerxa shared his discovery with future developers L.W. Coffee and Aubrey Wardman in 1932. Coffee was convinced of its potential as a hot springs destination after drilling two test wells more than 170 feet deep, striking water both times. He then set to work developing a community focused on the town’s mineral waters, envisioning a “health city.” After a few false starts, Coffee succeeded in opening a wooden bathhouse and swimming pool in 1941. It was a near-instant success, with weekenders sleeping overnight in their cars; no hotels had yet been built.

Six years later, Coffee was forced to rebuild the bathhouse when the original wooden structure burned to the ground. Replacing it with the area’s first reinforced concrete building, its commemorative plaque speaks to his dedication. It reads, “L.W. Coffee and Lillian T. Coffee, who developed these God-given curative hot mineral waters, so long hidden beneath the sands of the desert, waiting for the time to arrive when suffering humanity could enjoy nature’s benefits, the wealth of health.”

By the 1950s, Coffee’s enthusiasm had not waned. Although his vision for experimental health institutions to treat polio, arthritis, and even stomach and kidney disorders with Desert Hot Springs’ “miraculous” waters never came to pass, mineral spring resorts proliferated. The 1950s marked an era of growth, spawning the rise of new “spa-tels,” the iconic midcentury modern motels and hotels with mineral water pools whose architectural revival helped fuel the area’s hot springs renaissance some 40 years later. Hot Waters in the Modern Age

Today, authentic hot springs experiences are a leading trend in the spa world. Globally, keepers of the waters are taking note. While bringing a new creative spirit to the guest experience, most prefer to let the waters wield their own magic. Both communal and relaxing, hot springs offer everything a multitasker could want, including a foolproof way to slow down.

Hot springs also invite us to appreciate the miracle of water. Life sustaining, cleansing, healing, and calming, these ancient mineral-rich waters provide an opportunity to see into our past as well as our future. As the state of California faces an indefinite drought, wisdom invites us to pause and consider the greater good once again. Mineral springs everywhere are sacred to all of mankind.