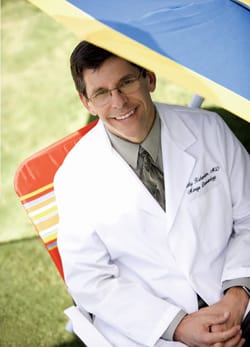 In the desert where the sun shines brilliantly year-round, a dermatologist’s work is cut out for him. “It’s not realistic to expect people to stay completely out of the sun when they live in a resort area like this,” dermatologist Timothy Richardson says. “But I do encourage my patients to avoid the midday sun whenever possible. Choosing outdoor activities in the early morning or late afternoon is a much safer way to go.”

With a patient base that is largely desert-dwelling retirees, Richardson says a big part of his job focuses on educating people about the dangers of UV rays.

Because of his expertise in Mohs micrographic surgery, a method of treating skin cancer that removes all of the cancer while keeping normal tissue intact, Richardson limits his dermatology practice to cancer treatment. In an average week, he performs more than 30 surgeries and says he prides himself on producing scar-free results.

“I enjoy the fact that this is a medical specialty where we can actually fix the problem when we catch it early,” he says. “Because people are much more aware of the symptoms associated with skin cancer, the patients I see often come in when the condition is still highly treatable.”

Currently the only fellowship-trained Mohs surgeon practicing in the Coachella Valley, he says his penchant for perfectionism fuels his professional passion.

“The gratitude expressed by my patients following these types of procedures is what makes my job so worthwhile,” the dermatologist says.

Like most dermatologists, Richardson is a big proponent of sunscreen. Always one to lead by example, the outdoor enthusiast routinely slathers on plenty of sun protection prior to heading out for his daily bicycle jaunts. An avid exerciser, he typically bikes as many as 120 miles per week and spends at least three hours weekly working out at the gym.

“Exercise has become a very important part of my life,” he says. “My job requires a lot of focus and concentration, and I find that physical activity helps me relax and feel more balanced.”
|
Married 26 years, Richardson enjoys spending time with his family, which includes two sons, ages 11 and 21.

“My oldest son loves science and is currently pre-med at UC Irvine, so I just tell him to follow his heart,” he says. “It’s certainly worked for me.”